A senior EU mediator has warned of an "intense" 15-month period to complete talks for Britain's exit from the bloc. Guy Verhofstadt told the UK's Brexit minister that there will be no "special relationships" afterward. 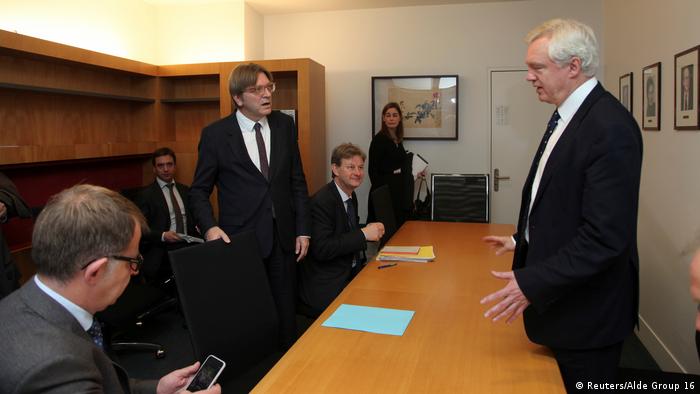 Verhofstadt and the UK's Brexit minister David Davis agreed that there was a window "of more or less 14, 15 months" for negotiations on Britain's departure from the European Union.

"We agreed ... on the need for this process to start as early as possible and need to be finished in any case before the next European elections (in May 2019)," the European Parliament's Brexit negotiator warned said after the talks in Strasbourg, France.

"It's going to be a period that is very intense," Verhofstadt warned, predicting that formal negotiations would likely start in May 2017, two months after British Prime Minister Theresa May triggers the two-year divorce process, which she has indicated will happen next March. 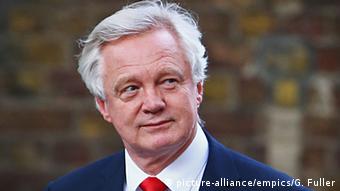 Verhofstadt said he also told Davis that the European parliament would not accept Britain cherry-picking the best parts of EU membership, by trying to keep access to the single market while limiting freedom of movement for EU citizens.

MEPs must then formally give their consent for any deal and that would take several months from late 2018, Verhofstadt said.

The former Belgian prime minister was joined for the talks by Manfred Weber, a conservative ally of German Chancellor Angela Merkel.

The British prime minister said in Berlin that Brexit was 'on track' despite mounting pressure on her leadership. Her comments followed a meeting with world leaders in the German capital. (18.11.2016)

A group of academics and lawyers has written to prosecutors to complain about "false statements" made ahead of the UK referendum vote on June 23. "Undue influence" is illegal under British electoral law. (08.11.2016)

As Britain prepares to leave the European Union, thousands of British bankers are considering a move to Frankfurt. Germany's financial capital is ready to take them in. (21.11.2016)

Germany's Finance Minister Wolfgang Schäuble has warned Britain against corporate tax cuts. Schäuble is concerned a tax cutting race could impact the stability of the eurozone and give the UK an unfair advantage. (21.11.2016)

Weber voiced impatience with a lack of clarity from May, adding: "I see a British government that keeps saying where it wants to cooperate closely and not how it wants to leave the European Union."

"Unfortunately I haven't heard anything new from David Davis today. For us it's clear: the four fundamental freedoms are not negotiable," he said, referring to free movement of goods, workers, services and capital.

The pair both insisted the meeting did not mark a formal start to negotiations, saying that would have to wait until Britain formally triggers the exit process.

Some analysts believe Britain may request a transitional arrangement to meet the 2019 deadline, with a full Brexit coming later.

May must also wait for an appeal in the British Supreme Court over whether the UK's parliament must approve the process to trigger Brexit. That ruling is due in early 2017.