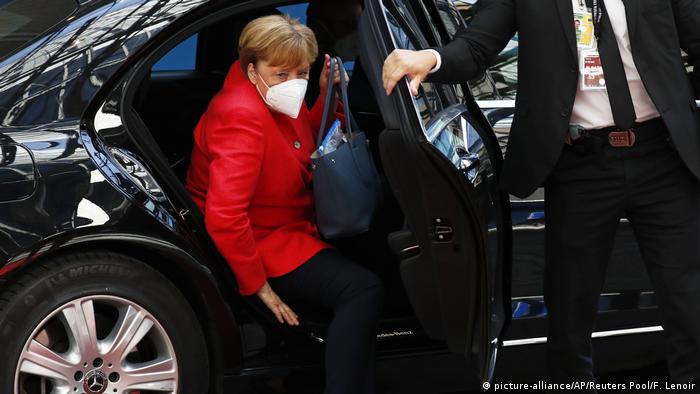 EU leaders wrangled over the details of a €1.85 trillion ($2.1 trillion) post-coronavirus recovery plan into the early hours on Monday, with European Council President Charles Michel appealing for compromise.

The marathon summit in Brussels, which began on Friday, were set to resume on Monday afternoon. Initially scheduled to last just two days, the negotiations have so far failed to resolve key divisions between member states. However, German Chancellor Angela Merkel said the leaders have managed to draw up "the framework for a possible agreement" after a long night.

"That is progress and gives hope that an agreement can be reached today,"she told reporters Monday as she arrived for a fourth day of talks.

French President Emmanuel Macron expressed similar cautious optimism ahead of Monday's negotiations. "I am starting today with a lot of determination to make progress," he said.

However, the countries remain at loggerheads over the size and conditions of the recovery effort. Some leaders, such as Dutch Prime Minister Mark Rutte, demand that states need to fulfill conditions, such as the rule of law, before getting the financial help.

This was rejected by Polish Prime Minister Mateusz Morawiecki on Monday, who also decried "stingy, selfish countries" ahead of the talks.

"For (the recovery compromise) to be acceptable to Poland, we must obtain what we've asked for from the beginning: no discretionary powers for EU bodies, EU institutions regarding the rule of law," he told Polish media in Brussels.

In another sign of tensions, the start of the official talks on Monday was repeatedly delayed, moving from 1200 GMT to 1600 GMT.

Merkel had warned on Sunday that it was still possible EU leaders may not arrive at an agreement on the unprecedented recovery package and long-term budget for the shattered EU economy.

There was no agreement among leaders on how much relief to provide in grants and how much to offer as loans, an anonymous source told Reuters news agency on Sunday evening. The diplomat said €350 billion was the maximum acceptable for a camp of thrifty northerners, compared to €400 billion seen as the minimum by many others, including Germany and France.

The size of the recovery package has been the biggest bone of contention as the Netherlands, along with Austria, Denmark, Sweden — the so-called "Frugal Four" — as well as Finland have put their weight behind a smaller fund and smaller portion of grants.

They also demanded that any loans or grants should be accompanied by strict conditions to ensure the countries that are under heavy debt carry out labor market reform.

Germany and France have been pushing for an ambitious package of loans and subsidies to member states, and have repeatedly appealed for a compromise.

Tensions heightened Saturday evening when Merkel and French President Emmanuel Macron got up and walked out of a meeting. Tempers flared again on Sunday, with Macron reportedly threatening another walkout.

The Franco-German alliance is seen as vital to any major deal within the 27-nation bloc.

On Saturday, a revised plan was presented to the 27 leaders to try to break the deadlock. The proposal would see a reduction in the share of the free grants issued to EU states, and an "emergency brake" on the disbursement of funds.

The plan would also increase rebates on the core EU budget for Austria, Denmark and Sweden.

A lot is at stake for the leaders' first face-to-face summit since the pandemic was declared. The bloc faces its worst post-war recession and countries need cash fast to shore up their economies from pandemic-induced crises.

The 27-nation bloc's economy is estimated to contract 8.3% this year, according to the latest predictions.

Before Sunday's talks resumed with a "cold plate" dinner, Hungarian Prime Minister Viktor Orban accused Rutte of hating him personally and wanting to "punish" his country.

Hungary, along with Poland and Slovenia, is resisting possible strings tied to EU aid, including over rule of law violations. Speaking to reporters, however, Orban insisted he was not opposed to reform, only that it would take time. He then launched into a tirade against the Dutch leader.

"I don't know what is the personal reason for the Dutch prime minister to hate me or Hungary. But he is attacking so harshly and making very clear that because Hungary in his opinion does not respect the rule of law it must be punished financially," Orban said. "That's his position, which is not acceptable because there is no decision about what is the rule of law situation in Hungary," he added.

Orban said he initiated a proposal during the summit "to ask the Germans to give a guarantee that the European Council of EU will negotiate and make a decision on the rule of law procedure against Hungary."

Rutte seemed to shrug off the criticism.

"We are not here because we are going to be visitors at each other's birthday party later. We are here because we do business for our own country. We are all pros,'' he said.

German Chancellor Angela Merkel has warned "time is of the essence" for an EU agreement on funding the €750-billion reconstruction package. However, the Netherlands says a deal at a summit over the weekend is unlikely. (14.07.2020)

After meeting Italian PM Giuseppe Conte, German Chancellor Angela Merkel has warned there is still work to do before a recovery deal is reached. She also decried the "alarming" Hong Kong crisis. (13.07.2020)

Austrian Chancellor Sebastian Kurz has announced the conditions for him to approve the European Union's €750-billion pandemic recovery plan. The bloc is expected to reach an agreement later this month. (12.07.2020)