The respective leaders of the Balkan neighbors have met in Brussels for face-to-face talks. The EU is hoping for frosty relations to thaw but discussions got off to an inauspicious start. 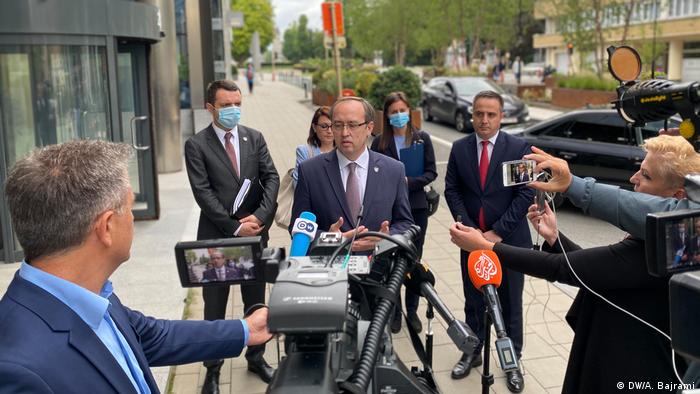 Face-to-face talks between Serbia and Kosovo got off to a bumpy start in Brussels on Thursday as Belgrade accused Pristina of being unrealistic in its demands.

More than two decades after clashing in war, the Balkan neighbors are at loggerheads over a number of issues, principally Kosovo's statehood, which has been backed by some 100 countries, including the United States and all but five member states of the European Union.

EU officials brokered a videoconference last Sunday between Serbian President Aleksandar Vucic and Kosovo's new Prime Minister Avdullah Hoti. And on Thursday the pair went a step further by meeting in person in Brussels in an effort to thaw frosty relations.

However, after the summit in the Belgian capital Vucic accused Hoti of coming not to talk, but to try to "blackmail" Serbia.

"Is it pleasant to sit on the other end from Hoti and listen to the gibberish, saying that they are the only victims and we are the only villains? No," Vucic said.

The Serbian president said he came with the intention of moving a step closer to solving the outstanding disagreements between Belgrade and Pristina. "But it is obvious that the differences are too big at the moment, concerning all important and strategic matters," Vucic said.

"They would like to solve (everything) overnight, with an attempt to make Serbia accept everything they want."

Hoti was more positive regarding the discussions, saying they had been able to make progress on economic development.

But the underlying issue is territorial. Serbia refuses to acknowledge the independence that its former province, home mainly to ethnic Albanians, proclaimed in 2008.

Nevertheless, EU foreign affairs chief Josep Borrell hailed the fact the two leaders were talking for the second time in a matter of days as a sign of the pair's commitment to healing wounds.

He urged them to adopt a "spirit of compromise and pragmatism."

Discussions will continue next week among officials and another high-level meeting is on the agenda for September, the EU's special representative for the talks, Miroslav Lajcak, said.

While Kosovo seeks complete recognition of its sovereignty, Serbia is under pressure to resolve the issue if it wants to make headway in its EU accession bid.