The European Parliament has adopted a report slamming China's "military belligerence" and calling for closer relations with Taiwan, triggering "strong condemnation" from Beijing. 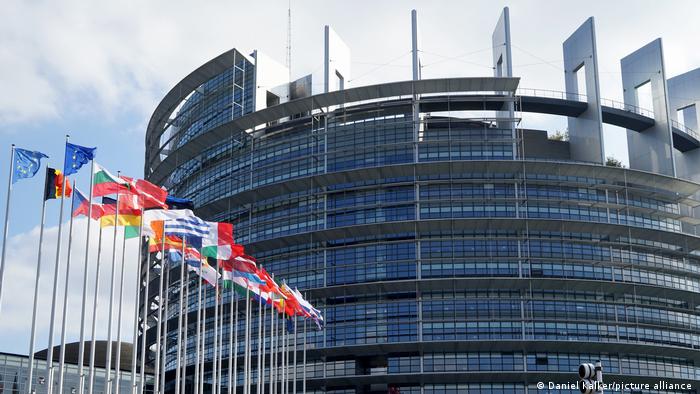 The European Parliament on Thursday adopted a resolution calling for strengthening the EU's ties with Taiwan, the bloc's legislature said in a statement.

The move comes amid heightened tensions between Beijing and Taipei.

Taiwan split from mainland China in 1949 and views itself as an independent state. Beijing considers the self-run island part of its territory and opposes Taiwan having any official diplomatic exchanges.

What did the resolution urge?

The non-binding resolution, adopted with a majority of 580 to 26 votes, urged a new investment deal between the EU and Taiwan.

Amid a global chip shortage, MEPs highlighted areas of cooperation with Taiwan, including "essential cooperation on critical supplies like semiconductors."

Members of the European Parliament (MEPs) said there was an urgent need to begin "an impact assessment, public consultation and scoping exercise on a bilateral investment agreement."

China and the EU had struck a similar deal last year. But its ratification has been delayed by the European Parliament since China imposed sanctions on European lawmakers earlier this year.

Thursday's resolution demanded that the bloc's trade office in Taipei be renamed the "European Union office in Taiwan," effectively upgrading the mission.

The European Parliament also expressed "grave concern" over Beijing's increased "military belligerence, pressure, assault exercises, airspace violations and disinformation campaigns against Taiwan." Taipei has said there have been more than 150 incursions on its airspace by Chinese jets in recent weeks.

Trade talks with Taipei 'must begin' this year

"The European Parliament's first report on EU-Taiwan relations demonstrates that the EU is ready to upgrade its relationship with our key partner Taiwan," rapporteur Charlie Weimers said in a statement.

Negotiations with Taipei to strengthen economic ties with the EU "must begin before the end of this year," Weimers said.

How did Beijing and Taipei respond?

Taiwan's Foreign Ministry said the resolution would "set a new milestone" for its ties with the EU.

"The EU parliament should immediately stop words and actions that undermine China's sovereignty and territorial integrity," he told reporters in Beijing, according to Reuters news agency.

Beijing urged the two European countries not to "undermine the political foundation of bilateral relations."

Earlier this month, China also reacted angrily after French lawmakers visited Taiwan and referred to the island as a country.