Following an online summit between the European Union and India, the two powers have announced plans to set up a "high-level dialogue" on investment and trade. Details of any potential free trade pact remain uncertain. 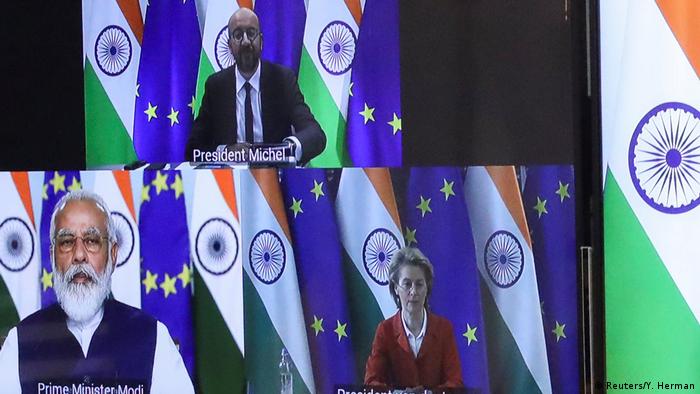 India and the European Union have vowed to deepen trade ties on Wednesday, with the two sides agreeing to set up a high-level ministerial dialogue on trade and investment.

However, after the videoconference, no mention was made on the time frame of a free trade agreement that has been under discussion for several years.

"The high-level dialogue will aim at fostering progress on the trade and investment agreements, addressing trade irritants and improving conditions for traders and investors on both sides as well as discuss supply chain linkages," a joint statement said after the talks.

"As the world’s largest democracies, the EU and India must work more closely to promote and protect our shared interests, based on effective multilateralism, the rule of law and human rights," von der Leyen wrote on Twitter.

"India and the EU have held discussions on this broad-based trade and investment agreement for quite some time," he said. "But since 2013, those negotiations haven't really taken place.

Eradication of child labor remains a sticking point in cooperation between the two powers, as well as protests over a controversial Indian citizenship law and relations with China.

Von der Leyen refused to comment directly on tensions between India and China when asked in a press briefing.

Relations between Europe and China are tense after the EU directly criticized Beijing over the Hong Kong security law, while India and China saw deadly border clashes last month.

"China and India are both important to us, both are very different," she said. "The difference is that we share with India that we are democracies."

"Our relations with China did come up," Swarup said. "The Prime Minister (Modi) shared his views on the India-China relationship in general, and the current border situation.

A more specific roadmap for the upcoming trade and investment talks was not announced.