EU holds off on sanctions amid growing unrest in Venezuela | Americas | North and South American news impacting on Europe | DW | 17.07.2017

EU holds off on sanctions amid growing unrest in Venezuela

Spain's foreign minister has urged the EU to consider sanctioning Venezuela if Nicolas Maduro goes ahead with changing the constitution. But the bloc's foreign policy chief Federica Mogherini says there's time to wait. 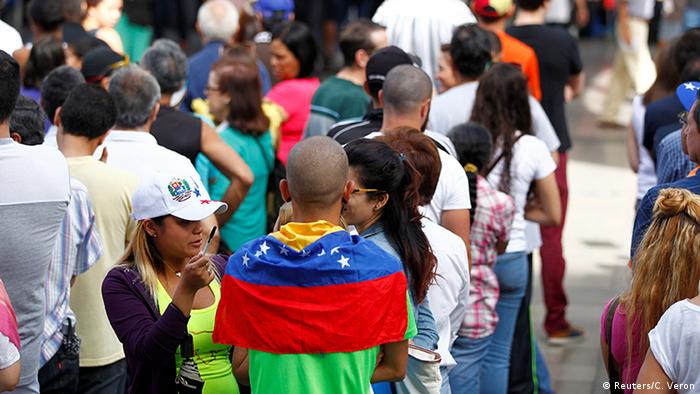 More than 7 million people came out to cast their votes Sunday in an informal poll against Venezuelan President Nicolas Maduro's plans to rewrite the country's constitution.

Maduro says the opposition move doesn't count and he'll go ahead with the scheduled July 30 vote on creating a new "constitutent assembly" which will have the right to annul the current opposition-led parliament and change the constitution.

But if Maduro does make those changes, he may have resistance coming from outside as well as inside his country.

Canada became the first government to unambiguously throw its support behind Sunday's show of opposition, with Foreign Minister Chrystia Freeland openly slamming Maduro's government and telling it to change course.

"Canada congratulates the people of Venezuela for exercising their democratic rights today during the national unofficial vote on the government's plan to rewrite the constitution and the political future of their country," Freeland said in a statement laced with criticism. "While this public consultation was unofficial, the millions who had the courage to participate, in spite of cowardly violence and censorship, sent a clear signal to the government of Venezuela."

"Canada calls on the Venezuela government to cancel the national constituent assembly and enter into negotiations with the opposition," she added, "in order to restore constitutional order in a manner that focuses on the legitimate concerns of the Venezuelan people."

Brussels puts Venezuela on back burner

In Brussels, the outrage is coming more slowly to a boil. The situation in Venezuela was formally on the agenda of foreign ministers' regular monthly meeting, but only Spain's Alfonso Dastis spoke up.

"The solution to the crisis in Venezuela should be negotiated, democratic and peaceful," Dastis said upon arrival at the meeting. He did say, however, that it's time for the EU explore the possibility of imposing sanctions against government figures, including the president, to pressure him not to move in the undemocratic direction he has planned.

Following the meeting, EU foreign policy chief Federica Mogherini expressed little urgency in sending a tough message to Maduro before the end of the month.

"We still have some time," Mogherini told a news conference. "I hope the time from now til the 31st of July can be wisely used to look for the unity of the country and avoiding any further escalation."

She views the opposition vote as a "clear sign that there is a political will of the population that includes negotiations and peaceful solutions" and hopes partners in the region will help make that happen. 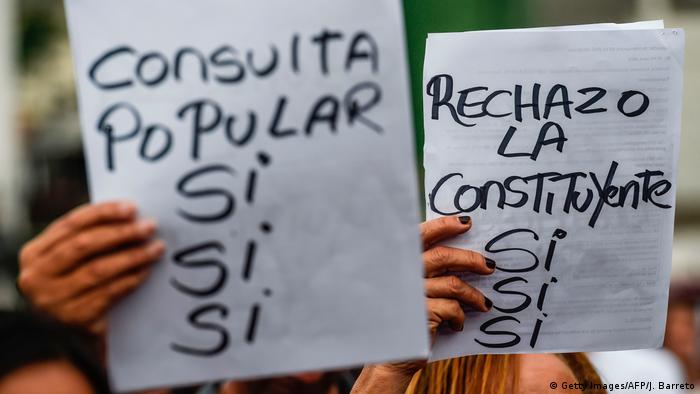 Andrew Stroehlein of Human Rights Watch was much less sanguine about the situation. "Venezuelan authorities at the highest level bear responsibility for pervasive, serious abuses being committed under their watch, including the brutal repression of public demonstrations and cases of torture," he told DW. "The top priority for the international community, including the EU, right now should be to try to prevent them from ramping up that repression even further. That means pressing for accountability: The outside world needs to give the generals reason to fear that any abuses they commit will get them punished - if not now, then in a not-too-distant future when the rule of law is restored."

European Parliamentarian Antonio Lopez-Isturiz White says he's not going to be patient with Caracas for much longer.

Lopez-Isturiz White, who serves as Secretary General of the European People's Party (EPP), said he and many others in the European Parliament want Europe to take tougher action against the Maduro regime, preferably personal sanctions. He said the EU should prove it stands for freedom and democracy and against the people who trample those principles.

"While we don't believe in things like the US blockades," Lopez-Isturiz White told DW, "we believe in sanctions that don't affect the normal people." He said he expects to see EP reaction move forward in September if the situation doesn't change and that a majority of lawmakers will be in favor of punishing the government for its actions.