Nearly 7.2 million Venezuelans have taken part in an informal opposition vote against the government of leftist President Nicolas Maduro. The vote was marked by episodes of violence. 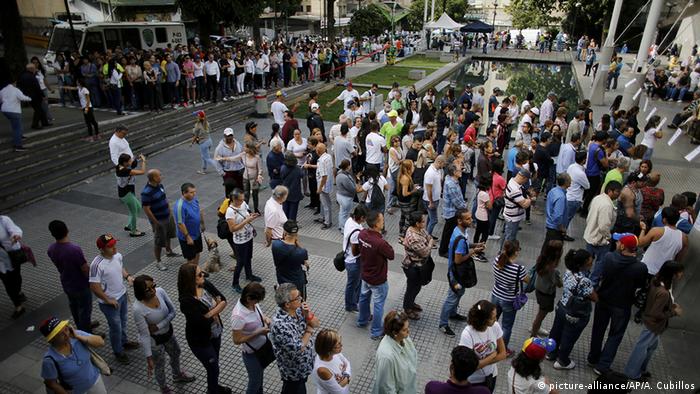 Nearly 7.2 million Venezuelans voted in an unofficial referendum on Sunday against Socialist President Nicolas Maduro's plans to rewrite the constitution.

Venezuela's opposition Democratic Unity Roundtable (MUD) coalition claimed the high turnout - about a third of the 19 million eligible voters - provided a mandate for them to challenge Maduro.

The nearly 7.2 million votes "confirmed the reason why Maduro is afraid of elections that are mandated by our constitution," National Assembly President Julio Borges wrote on Twitter.

The referendum comes nearly two weeks before a Maduro-backed vote for a constituent assembly that would be tasked with rewriting the constitution without the opposition controlled national assembly. The opposition has called for a boycott of that vote.

Sunday's referendum, which was not recognized as official by Maduro's government, asked voters three questions at more than 2,000 sites in Venezuela and in 80 different countries: whether they support Maduro's plan for a constituent assembly; whether the military should support the current constitution and decisions of the national assembly; and if there should be early elections before Maduro's term expires in 2018.

Earlier results suggest more than 95 percent of those who cast their ballot were expected to back the opposition.

The opposition blamed pro-government "paramilitary groups" on motorcycles for attacks on voters, including one in a Caracas neighborhood that left one woman dead and three people injured.

Speaking on state television shortly after the polls closed, Maduro failed to make any mention of the shooting. Instead, he called for an end to the violence, which he blamed on the opposition.

"I'm calling on the opposition to return to peace, to respect for the constitution, to sit and talk," the president said. "Let's start a new round of talks, of dialogue for peace."

The woman's death brought to 96 the number of people who have died in nearly 100 days of protests, which have left more than a thousand injured. More than 500 people have been detained.

Maduro held his own rehearsal vote for the constituent assembly on Sunday, which may have dented turn out for the opposition's referendum as more than two million state workers were encouraged to attend.

Support for Maduro's constituent assembly stands at about 30 percent, while the president's approval rating is 20 percent as the country experiences high inflation and an economic downward spiral, according to pollster Datanalisis. 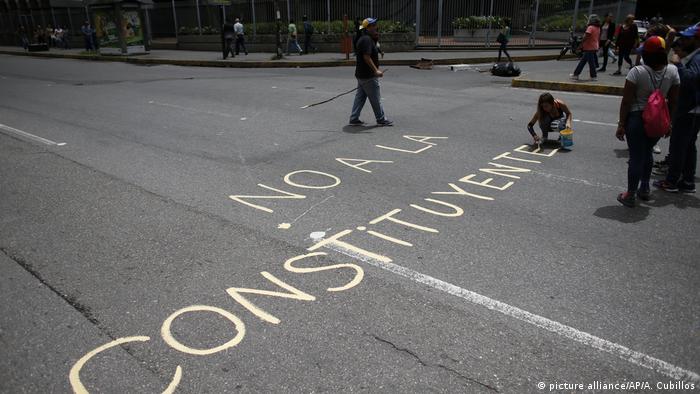 A protester paints "No to the Constituent," referring to the assembly Maduro wants to rewrite the constitution.

The opposition MUD coalition, the influential Catholic church and Organization of American States have warned that rewriting the constitution would consolidate Venezuela's slide towards full dictatorship under Maduro.

Vote to prevent collapse of institutions

The head of the OAS, Luis Almagro, in a video called on Venezuelans to take part in Sunday's vote "to prevent the definitive collapse of the country's institutions."

Five former Latin American presidents - from Bolivia, Colombia, Mexico and two from Costa Rica - were also in Venezuela at the invitation of the opposition to observe the vote.

Venezuelan Foreign Minister Samuel Moncada said former Mexican president Vicente Fox, who was in Venezuela for the vote, had been declared persona non grata and banned him from the country for conspiring to instigate violence and foreign intervention.

There are emerging fractures within the ruling clique, which controls most institutions in the state outside the weakened national assembly.  Attorney General Luisa Ortega broke ranks with the government over the constituent assembly and the erosion of democracy under the Maduro government.

There are also some nascent signs of dissent within the still loyal military, which controls large parts of the dwindling economy.

Analysts say that if Maduro loses the support of the military his rule is all but finished.

In asking the question in the unofficial referendum what role the military should play in the current crisis, the opposition appears to be trying to apply pressure on parts of the military to break with Maduro.

The high court wants to strip the chief prosecutor, Luisa Ortega Diaz, of her immunity from prosecution. Ortega slammed the court and the charges against her, calling it "a circus." (04.07.2017)

Having been transferred to house arrest from prison, Venezuelan opposition leader Leopoldo Lopez has urged the opposition to President Nicolas Maduro to continue protesting. Maduro accuses Lopez of being a terrorist. (08.07.2017)

Klaus Barthel, a member of the German Bundestag, has called for a depoliticization of the judiciary in Venezuela. He tells DW that neither government nor opposition has an idea of how to get out of the economic crisis. (10.07.2017)