The European Commission has said it will offer member states that present credible reform plans more time to bring their budgets in line with EU laws, a move that could be positive for nations such as France and Italy. The Commission on Tuesday announced that rules allowing punishment of member states for excessive deficits and debts will now be "applied in an intelligent, effective and credible manner." Commission Vice President Valdis Dombrovskis said that in certain cases the EU executive "may allow a member state to deviate temporarily from its medium-term budgetary objective or adjustment path."

The offer is aimed at supporting structural reforms and investment, and is part of a host of measures aimed at kick-starting Europe's flagging economy. These include a much-touted EU investment plan, the details of which were also unveiled Tuesday.

The move means France and Italy are less likely to face penalties for violating debt and deficit limits.

The commission stressed that the new measures will not require changes to the Stability and Growth Pact, which sets the EU's deficit cap and stipulates that national debt should not exceed 60 percent of GDP.

France had previously come under particular scrutiny for failing to bring its deficit below the EU limit of 3 percent of gross domestic product (GDP), despite being given two extensions to reach the target.

In November, the Commission predicted that the French deficit would stand at 4.5 per cent of GDP in 2015. It gave Paris a March deadline to bring its budget in line with EU debt and deficit rules, or else face the prospect of sanctions.

Six other countries, including highly indebted Italy and Belgium, were also told that they risked failing to comply with the EU's Stability and Growth Pact.

But EU Economy Commissioner Pierre Moscovici said on Tuesday the Commission is changing its approach to better encourage economic recovery.

"Fiscal responsibility is a necessary, but not a sufficient, condition for jobs and growth," Moscovici said, adding that the "smarter application" of EU budget rules will allow for much-needed investment and structural reforms.

Moving forward, member states can be given additional leeway to take into consideration the cost of implementing structural reforms, and exemptions can be given for public investments under given circumstances.

Furthermore, the commission said it would take fluctuations of the economic cycle into greater account when looking at the reform efforts undertaken by member states.

Countries such as Germany have been adamant that the EU's strict budget rules must not be relaxed.

The EU's executive also laid out the legislative proposals for its much-touted 315 billion euro ($373 billion) investment plan on Tuesday. These must now be agreed by EU governments and lawmakers, with a view to implementing the plan by mid-2015.

The plan foresees the use of existing EU budget money to create a 21 billion euro guarantee fund aimed at encouraging investors to back projects considered too risky for private investment at present. 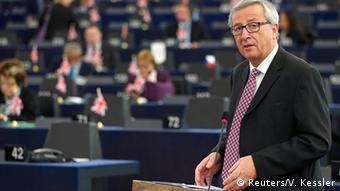 European Commission President Jean-Claude Juncker has called on the bloc's governments to help finance the initiative, but no concrete pledges have been made to date.

"I would like to renew my appeal to member states to contribute through bilateral payments to the capital of the strategic fund that we are putting in place," Juncker said in the European Parliament on Tuesday.

As an enticement, the commission said contributions to the fund will not be taken into account if they push member states over the EU's deficit limit, "provided the deviation is small and expected to be temporary." The impact on national debt will also be disregarded.

A French politician has launched a verbal assault on Angela Merkel after the German leader called for more budget tightening in France and Italy. German finance minister Schäuble attempted to strike a conciliatory tone. (08.12.2014)