Opinion: Eurozone has no answers to economic slowdown

Which is the way forward for the eurozone - saving or spending? The clash of opinions continues, and the new EU commission is to come up with solutions where the Brussels summit failed to deliver, argues Bernd Riegert. 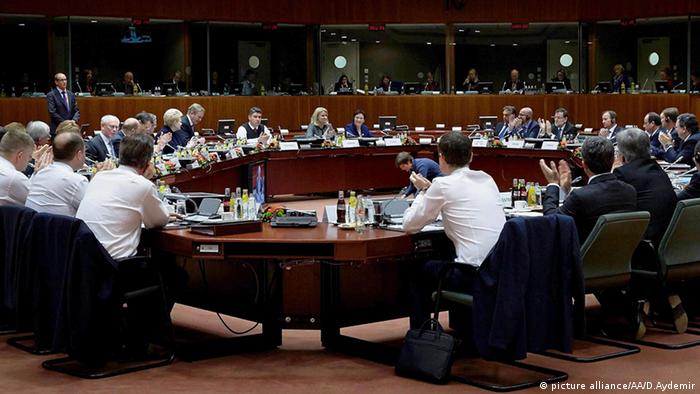 Many EU states could look to Estonia as a role model. The Baltic state has a spectacularly low debt level and has to pay virtually no interest. At the same time, the country, with its IT-oriented economy, has one of the highest investment rates in the EU. A miracle? No. Estonians made it by means of a consistent saving and consolidation policy and very tough years for its population in the wake of the financial crisis.

Of course conditions in Estonia, being a former Soviet Republic and a fledgling EU member state, are completely different from those of debt-ridden countries such as France and Italy, both in economic slowdown - but maybe there are recipes that Paris or Rome could borrow from Tallinn. The summit of the 19 euro states in Brussels was supposed to give that kind of orientation. Regrettably, it developed into mere bickering.

The two major camps lashed out at each other. The southern "crisis states" demanded more public investment and more leniency on deficit reduction. The northern states, grouped around Germany, insist on meticulous compliance with stability rules and on balanced budgets and are reluctant to provide public economic stimulus measures and investments. This is hardly a suitable approach to build potential investors' confidence in a reliable, prudent economic policy.

Meanwhile, the president of the European Central Bank moves haplessly between the frontlines, trying desperately to buy time with cheap money, very close to the brink of the ECB mandate. But Mario Draghi can't fail to notice that despite historically low interest rates and the ECB's readiness to buy up "toxic" assets, banks are not lending enough and that businesses, particularly those in crisis-affected countries with high unemployment rates, are left high and dry.

Draghi has been urging the governments to finally agree on a consistent economic policy, to get on with reforms and calm the financial markets. Following the financial and debt crises, the eurozone is now stuck in an economic crisis with the danger of long-term stagnation, possibly in combination with a price slump.

The ECB president conceded that his monetary policy will have all its aces on the table soon - now it was up to the politicians to act. He asked for more spending, but demanded budget consolidation at the same time - following the Estonian example.

But the governments gathered in Brussels fell short of agreeing on concrete steps. German Chancellor Angela Merkel adheres to her motto of avoiding new debts. Italian Prime Minister Matteo Renzi insists on investments and increased spending, preferably financed by the EU or collective "pots" like the ESM bailout fund. With their backs to the wall, the governments asked incoming European Commission chief Jean-Claude Juncker to submit an investment package totalling 300 billion euros ($380 billion). This had already been announced by Juncker. How the package will be financed and where the money is going to be spent remains completely uncertain, even after the summit.

So the summit did not exactly perform well, and was further overshadowed by two prime ministers' impudence. Matteo Renzi declared that he did not care about the EU Commission's assessment of his budget - he would implement it anyway. British Prime Minister David Cameron ranted, his head turning red, that he wouldn't pay an additional EU budget contribution due in December. His stance is completely absurd from a legal point of view, but back home he may be able to score points with Euro-skeptic Britons.

Renzi and Cameron made their mark at the EU's expense. Chancellor Merkel was unable to suppress a slight grin. The real problems were postponed. In sum, the summit said goodbye to a credible joint economic policy in the eurozone.

At least the EU heads of state and government did agree to increase their Ebola aid by 400 million euros to a total of one billion. The exact source for this funding was not specified. In this context at least, the chancellor showed determination. Ebola, she said, now was a top priority, and Germany was prepared to pay more if necessary. A late insight, but, at any rate, a clear statement.

A confidential draft of the European Central Bank's stress test of eurozone banks has reportedly shown that 25 financial institutions failed the review. (24.10.2014)

A European Union summit has been interrupted by a demonstratively angry British Prime Minister David Cameron, who rejected a "sudden" request that London pay billions more into the bloc's budget. (24.10.2014)

Britain's gross domestic product (GDP) has expanded in the third quarter, albeit at a slightly slower pace than in the previous three months. But increased prosperity might backfire, budget experts warned. (24.10.2014)