EU fears divisions as China woos Eastern European nations | Asia | An in-depth look at news from across the continent | DW | 05.07.2018

As the world prepares to tackle trade tensions and tit-for-tat tariffs, the summit between leaders of China and Central and Eastern European nations offers a chance for Beijing to present itself as a free trade champion. 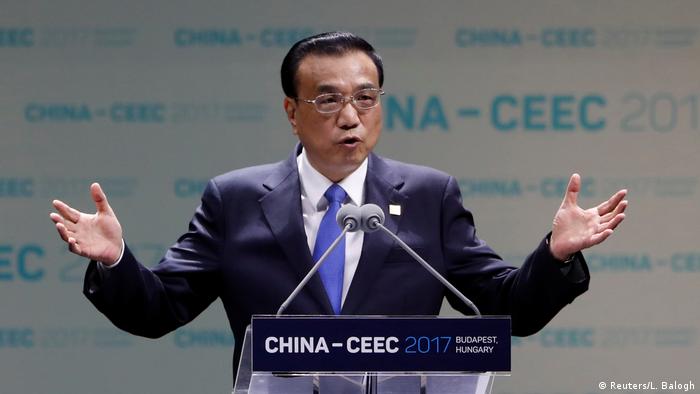 Policymakers and analysts from China and some CEE countries, however, reject such assessment. They say that the purpose of the platform is to cultivate good relations and foster economic cooperation.

"The cooperation between China and Central and Eastern Europe is an integral part of China-EU cooperation. It sends a positive signal on the world stage in support of free trade," Jin Ling, an expert on European affairs at the China Institute of International Studies, told DW.

Trade between the two sides has seen rapid growth over the past decade, with total commerce amounting to about $68 billion (€58 billion) in 2017. Over the past several years, China has pledged massive sums for infrastructure projects worth billions in the region, including in sectors that are critical for national security such as roads, railways and power stations.

In a bid to draw more Chinese money into the region, a special economic forum is being organized alongside this year's summit. Over 250 Chinese firms and 700 business executives from CEE nations are taking part in it. "Our main goal is to increase Chinese business presence in Bulgaria and in the whole region of Central and Eastern Europe," Bulgaria's Deputy Foreign Minister Georg Georgiev told Reuters.

This enthusiasm, however, is not shared uniformly across Europe, particularly in Brussels where Beijing's growing leverage over these countries is viewed as a threat to EU unity, norms and values.

Many European officials worry that, in exchange for Chinese investment, CEE countries would be willing to side with Beijing and hamper the EU from taking a unified stance on key global issues such as upholding the international rule of law and human rights.

They point to instances such as Hungary's refusal to sign a letter in 2017 condemning the torture of detained lawyers in China. Likewise, in 2016, Greece — which is an observer in the 16+1 grouping and major beneficiary of Chinese money in recent years — blocked a strong EU declaration against Beijing's activities in the South China Sea.

The leaders of these countries have also embraced Beijing's Belt and Road Initiative (BRI), President Xi Jinping's ambitious plan to build and expand transport and trade links between China and countries in Asia, Europe and Africa. BRI is widely seen as helping to cement Beijing's position as a new global superpower.

Nevertheless, some CEE leaders like Hungarian Prime Minister Viktor Orban see closer economic ties with Beijing as an alternative to EU cooperation. "Central Europe needs capital to build new roads and pipelines. If the EU is unable to provide enough capital, we will just collect it in China," Orban said in Berlin earlier this year.

Despite the ambitious rhetoric about deepening partnership, some countries complain about the underwhelming results in terms of executing the announced projects.

The list of finished projects remains short, with just a bridge in Serbia and a motorway in Macedonia completed as of late 2017. "Some large-scale projects have been delayed, reflecting some of the current trust deficits between Europe and China. These should be resolved through dialogue," Chinese analyst Jin Ling said.

Some Chinese investments in CEE countries could also create risks to their financial stability, they say. "Easy access to Chinese money could be particularly risky for smaller 16+1 players, where uncontrolled growth of debt could pose threats to the fiscal stability of their economies," Micha Romanowski, an expert in Eurasian affairs at the German Marshall Fund of the United States, wrote in a report published last year by YaleGlobal Online.

"When Montenegro signed a highway contract with China in 2014, it saw its public debt grew by 23 percent," he pointed out.

Chinese Premier Li Keqiang is meeting with leaders of eastern and southeastern European countries at the fourth CEE-China summit. The group seeks to expand economic cooperation and China is set to benefit. (17.12.2014)