The EU and Canada have placed sanctions on Myanmar military and police officials in response to the Rohingya crisis. The Myanmar army said one of the officials had been fired and another was "given permission" to resign. 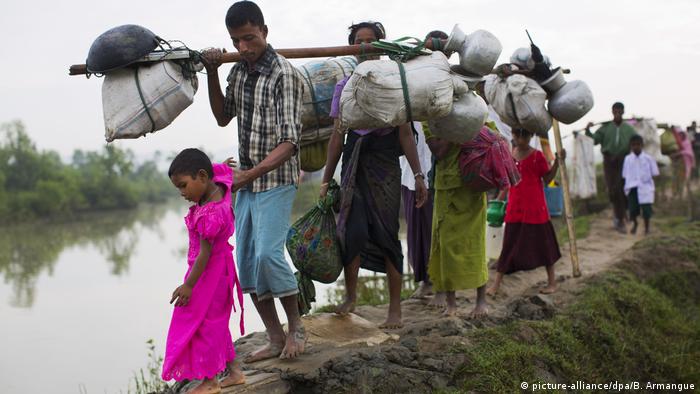 The European Union and Canada on Monday imposed sanctions on seven military, border guard and police officials in Myanmar over human rights violations against Myanmar's Rohingya population in Rakhine state.

"These violations include unlawful killings, sexual violence and the systematic burning of Rohingya houses and buildings," EU foreign ministers said in a statement.

Five army generals, a border guard commander and a police commander have been hit with travel bans and asset freezes for their role in the Rohingya exodus.

Among those sanctioned is Major General Maung Maung Soe, who was in charge of an operation that has been blamed for pushing more than 700,000 Rohingya Muslims into neighboring Bangladesh. He has already been sanctioned by the United States.

"He is responsible for the atrocities and serious human rights violations committed against [the] Rohingya population in Rakhine State by the Western Command during that period," the EU said in a statement.

A Doctors Without Borders field study released in December 2017 found at least 6,700 Rohingya Muslims were killed during a crackdown by Myanmar's security forces in Rahkine State between August and September last year.

Hours after the EU's announcement,  the Myanmar army said that Muang Maung Soe had been fired from the military for underperformance when responding to Rohingya militant attacks.

Read more: Myanmar: Everything will change

It also said that another sanctioned commander — Deputy Major General Aung Kyaw Zaw, whose Bureau of Special Operations oversaw the Western Command — was "given permission to resign" in May.

He had earlier been removed from his original post after the army found "some flaws" in his performance.

"Canada and the international community cannot be silent. This is ethnic cleansing. These are crimes against humanity," Foreign Minister Chrystia Freeland said in a statement.

Myanmar's former colonial ruler, Britain, has played a lead role in preparing EU sanctions, and said Monday's sanctions would send a signal to senior military officials that the world was watching, and that those responsible would be held to account.

"These sanctions are a direct response to the appalling violence, including sexual violence, that took place in Rakhine last year. The individuals listed were responsible for units that have been identified as the perpetrators of this violence," Minister of State for Asia and the Pacific Mark Field said in a statement.

In April, the EU extended and strengthened its arms embargo on Myanmar and prohibited the delivery of military training and cooperation with the Myanmar army.

It has also adopted a legal framework for targeted restrictive measures against certain people from the Myanmar armed forces and the border guard police, which makes it possible to impose individual sanctions if crimes go unpunished.

The EU said further targeted restrictive measures were not out of the question if human rights abuses continued in the country.

People wait hours for food, elephants invade the camp and a wedding is celebrated. These are stories from the Rohingya camp in Kutupalong in Bangladesh. DW Akademie trains Rohingya refugees to work as camp reporters. (29.03.2018)

Cash is king in Myanmar, but for how long?

Since 2012, Myanmar has seen a steady economic growth, but most people in the Southeast Asian country still don't possess a bank account and prefer to use cash for financial dealings. Ate Hoekstra reports from Yangon. (21.02.2018)