The European Union has experienced some difficults times over the years. But this year some issues came together, which hit the EU right at its core. Christoph Hasselbach takes stock. 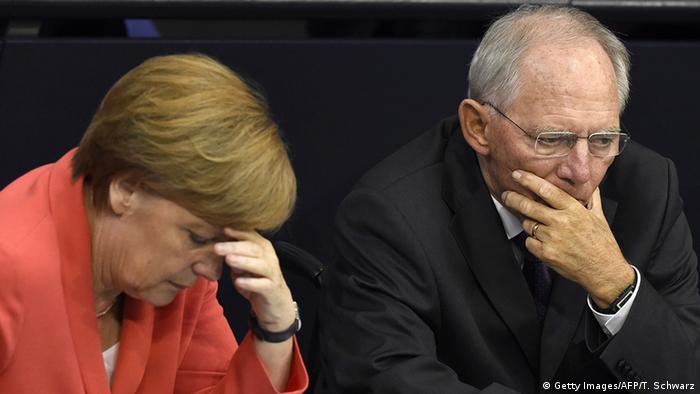 It was a different period of time, when the most important question for the EU was whether it could tackle the euro crisis or not. But that was some months ago. In January in Greece left-wing politician Alexis Tsipras assumed power and caused anger and fear for the creditors. He defied demands for reform and savings, just like he had promised before the election. What followed was a months-long poker game between Athens and its creditors.

It was one crisis meeting after the other. The "Grexit", the withdrawal of Greece from the EU Monetary Union, loomed more than once. Germany's Finance Minister Wolfgang Schäuble appeared to set an ultimatim in February with his comment "then it's over."

He later brought a possible temporary exit into play. The waves splashed high on both sides. But at the end of the dispute in the summer - provisionally - the Greek government gave in, accepted the conditions, and received a third installment of the rescue package and has tried since then to some degree to be an obedient reformer. That has put oil on troubled waters. The state deficit crisis in Europe is still there, but since the summer it appears to be controllable.

For many, at the height of the dispute, the euro was seen as jeopardized, perhaps even the EU as a whole. German Chancellor Angela Merkel stood on the side of the admonishers. Rules and agreements had to be observed, she said, otherwise Europe would be in danger. But it was she herself who later ignored the rules. 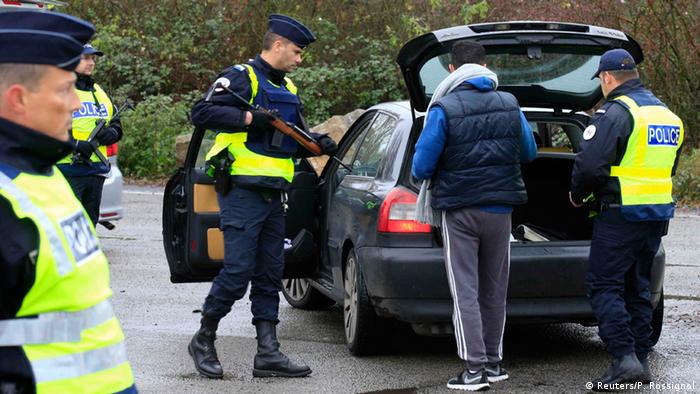 Because when in late summer the influx of refugees via the Balkan route grew more and more, when thousands of people were stranded in Hungary, who wanted to travel further north, above all to Germany, Merkel let them into the country, without respecting the so-called Dublin rules which provide for migrants to be sent back to their place of first EU landfall. A short time later she declared "Dublin" to be "obsolete."

Merkel allowed an uncontrolled inflow to happen for weeks, and announced steadfastly that for asylum seekers and refugees that there was "no upper limit," but also believed that "we can do this."

In Germany, many people agreed at first with this open-door politics. But as more and more refugees entered the country the mood changed. And most of the other European countries were surprised at Merkel's politics, then puzzled and finally stunned. Things became really uncomfortable for the chancellor when she tried to push through a European refugee quota system. Mostly eastern EU countries opposed it categorically and accused Merkel of having "invited" the refugees.

Hungarian Prime Minister Viktor Orban declared the refugee issue to be a "German problem" and closed off the country with a fence, firstly to non-EU neighbor Serbia and later to EU partner Croatia.

Since then, fences have been erected everywhere and border controls re-introduced, the open-border system in the Schengen zone has been restricted. "Europe is missing and Union is missing too", complained an exhausted EU Commission President Jean-Claude Juncker. Also Janis Emmanouilidis from the Brussels think tank European Policy Centre sees the Schengen system, as one of the great European achievements "strongly under pressure" and "fundamentally undermined." 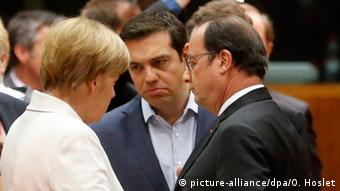 European shift to the right

Merkel did not only face resistance from other governments. Within the EU institutions, European Council President Donald Tusk has become the spokesman for those who want to raise the drawbridge. Early on he warned: "A Europe without outer borders will become a breeding ground for fear ". At the beginning of December he insisted in a newspaper interview: The influx of refugees is "too big, to stop." No one in Europe is prepared, "to accommodate these large numbers, including Germany. "

The exclusion and uncertainty in Europe has also been reflected in the election results. Practically everywhere, where there have been elections since late summer, the right-wing and xenophobic parties have been flourishing, among them Poland, whose new government openly polemizes also against Syrian refugees.

Foreign Minister Witold Waszczykowski said in November "can you imagine that we send our army to fight in Syria, while 100,000 Syrians drink coffee in Berlin and watch how we fight for their security?" Janis Emmanouilidis sees behind the shift to the right in Europe the citizens' impresssion, that the EU "is increasingly less in the position to solve problems." The result is a trend towards "nationalization."

The Islamic terror attacks in mid-November with 130 dead have led to a further radicalization. Although German politicians from the very beginning warned against mixing the attacks by the "Islamic State" with the refugee question, but the French government has done that itself. A liberal refugee policy, which Merkel represents, at European level is hardly able to be enforced.

Nearly frantically the EU states are trying now, some on an individual basis, some jointly, to reduce the numbers. The EU is even prepared to make payments and political concessions to transit country Turkey, which it used to heavily criticize because of the the human rights situation. Isolation, working together with countries of origin and transit states, but also prevention of flight causes are the mottoes, in that order.

Janis Emmanouilidis sees Europe at the end of this year endangered by crises - the euro crisis, the refugee crisis, the Ukraine crisis with the strained relationship with Russia, the situation after the attacks in Paris.

He sees the danger in the "fragmentation of the EU". And this has led to "that support for the EU sinks and support for populist forces increases." Finally all of these crises "can only be managed when there is cooperation at the European level."

But he remembers earlier critical moments like those, when many asked whether Greece could or should remain in the eurozone. Every time we ultimately saw that "there is no real alternative to European cooperation."

Turkey and the European Union (EU) have agreed on a plan to tackle the record influx of migrants into Europe. The bloc has promised Turkey 3 billion euros in aid money and renewed talks on its EU membership. (29.11.2015)

Amnesty International criticized Europe's refugee policies in the wake of the migrant crisis. It said that some EU member states dealt badly with the situation, resulting in various human rights abuses. (17.11.2015)