The economic downturn in debt-laden Greece appears to have accelerated again, revised figures by the country's statistics office show, in spite of a record tourism year and massive financial assistance from the EU. 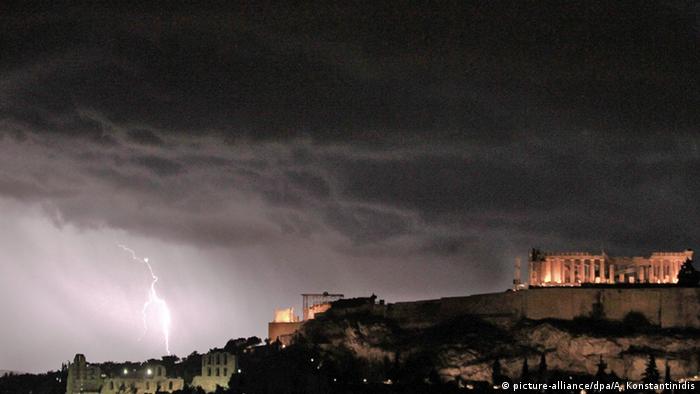 "These differences are on account of using new data, not available at the time of the flash estimate," the Elstat agency said, citing a mixture of September balance of payments data, service turnover and jobless figures as factors for the downturn.

In an annual comparison, Greek output had fallen by 1.1 percent from the third quarter of 2014, Elstat said. The flash estimate on November 13 had pointed to a 0.4-percent drop from last year.

The data is consistent with European Commission forecasts that Greece will fall back into recession in 2015 after a brief respite last year. The Commission is banking on a 1.4-percent contraction in 2015 and a further drop of 1.3 percent in 2016.

Greece's own 2016 budget, to be approved by parliament in early December, foresees "near zero" growth in 2015 and a 0.7-percent economic downturn next year.

Although Greece had a record tourism year, the gains were lost to economic uncertainty as the leftist government of Alexis Tsipras clashed with international creditors in June and imposed capital controls.

In August, however, Greece's international creditors approved a third bailout totaling 86 billion euros ($91 billion) in exchange for far-reaching reform pledges. As a result, Athens received an initial 13 billion euros in aid, but was slow to adopt the legislative changes needed to be granted the next disbursement.

On Monday this week, eurozone finance ministers finally gave the green light to the two-billion-euro tranche, declaring that Athens had successfully met the strict reform commitments demanded in the country's bailout.

Public sector unions have called a general strike to be held next week against the planned overhaul of Greece's generous retirement system. Last time more than 20,000 demonstrators took to the streets of Athens. (26.11.2015)

Germany helps Greece to crack down on tax cheats

A western German state has provided Greece with information about suspected tax dodgers, using data it has bought from insiders in Switzerland. The move is to help Athens get serious about fighting tax evasion. (26.11.2015)

Greece's parliament has approved reforms in order to receive its next round of bailout funds. During the vote, two lawmakers were expelled for opposing the bill, leaving PM Tsipras with a narrow majority in parliament. (19.11.2015)

Many Ahmadi Muslims are threatened with deportation from Germany. But other countries have recognized the need for the protection of a minority often persecuted in Pakistan.