Abiy Ahmed has said civilians should take up arms to halt the advance of Tigrayan forces "once and for all." A conflict, which has killed thousands since November, is spreading with no end in sight. 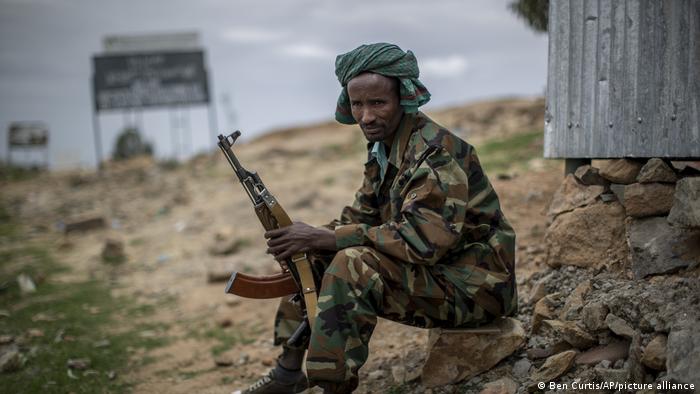 TPLF fighters in Tigray claim they only want security for their people, Ethiopian PM Abiy Ahmed says they are terrorists

"Now is the right time for all capable Ethiopians who are of age to join the Defense Forces, Special Forces and militias and show your patriotism," read a statement released by his office Tuesday.

What is the source of the conflict in Tigray?

Ethiopian forces were sent to the northern Tigray region last November to dislodge the influential regional ruling party TPLF, after attacks on federal army camps. The TPLF dominated Ethiopian politics for nearly 30 years before Abiy came to power in 2018.

Though Abiy promised to swiftly bring the TPLF to heel, his plan went awry when TPLF forces scored a surprising victory by recapturing the regional capital, Mekele, in June.

Meanwhile, the TPLF, who say they only seek to secure their region, end fighting and see the prime minister step down, have pushed into the neighboring Amhara and Afar regions.

Those advances have fueled fears of a further destabilization of the Horn of Africa region. Getachew Reda, a spokesman for the TPLF, told AP news agency last week that his forces seek to control a major shipping lane that functions as a supply chain from Djibouti to Ethiopia.

Reda said his group's activity was "not to spite the other parts of Ethiopia," saying the posture was just "part of the game" and noting that people in Tigray are starving.

Why is PM Abiy calling on citizens to take up arms?

With violence now spilling out into larger areas, Prime Minister Abiy is imploring citizens to help join security forces "halt the destruction of the treasonous and terrorist TPLF organization and the machinations of foreign hands once and for all."

Abiy's statement also called on Ethiopians to become the "eyes and ears of the country in order to track down and expose [Tigray] spies and agents."

Some observers are concerned that people from he region may be targeted simply for their ethnicity, though the government stated, "The battle is not with Tigray but with the terrorist forces." In May, Abiy's government declared the TPLF a terrorist group.

How bad is the humanitarian situation in Tigray?

The United Nations (UN) estimates that recent fighting in Tigray has displaced some 170,000 people. Overall, it is thought that roughly 300,000 have been displaced since fighting first began, thousands have been killed during that time.

The UN also declared that it was "extremely alarmed by the reported killing of over 200 people, including more than 100 children, in attacks on displaced families" in Afar. The statement was made by Henrietta Fore, who heads the UN children's relief agency UNICEF.

TPLF spokesman Reda denied that his group had anything to do with the incident, instead shifting blame to government forces whom he says, "launched an offensive."

Separately, UN refugee agency (UNHCR) spokesman Boris Cheshirkov told reporters in Geneva, Switzerland, that his agency had regained access to two refugee camps housing some 23,000 Eritreans in Tigray, but that their situation remained dire due to a "complex and fluid security situation."