The former ruling party in Tigray said it has taken back control of the regional capital Mekele. The city had been under the control of Ethiopia's federal government for eight months. 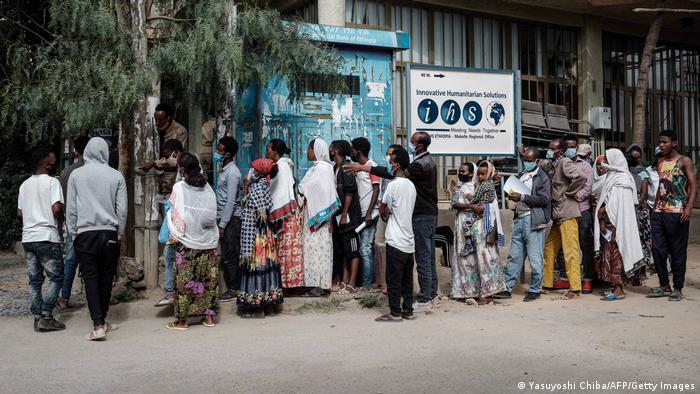 People wait in a line to enter a bank in Mekele, the capital of Tigray region, Ethiopia

Tigray People's Liberation Front (TPLF) said Monday that they were back in control of Mekele, the capital of Ethiopia's Tigray region.

The major turn of events comes after eight months of intense fighting in the region — with Ethiopia's federal government also calling for a unilateral cease-fire.

"The capital of Tigray, Mekele, is under our control,” a spokesperson for the TPLF told Reuters news agency.

Tigray rebel fighters, who called themselves the Tigray Defense Forces (TDF), were reportedly greeted with cheers in the city.

"TDF has taken control of the city," news agency AFP quoted an interim government official as saying. "They have entered. The city is celebrating. Everybody is outside dancing."

Abraham Belay, head of the interim administration, said, "the government has the responsibility to find a political solution to the problem," adding that some members within Tigray's former ruling party were willing to talk with the federal government.

It remains unclear how many interim government officials have remained in their posts.

There have been no immediate comments from neighboring Eritrea, whose soldiers have been accused of committing atrocities in the conflict.

The US, UK and Ireland called for a United Nations Security Council meeting over the issue, although a date is yet to be set for it. The last Security Council session on the matter was held on June 15 behind closed doors. Diplomats said China was opposed to the adoption of a joint declaration on the risk of extended famine in Ethiopia.

After the arrival of rebel troops, Ethiopia's government said it declared an "immediate, unilateral" cease-fire in its Tigray region.

It was unclear whether the cease-fire would be enforced or respected, as the offer came from the interim government in Tigray — with many officials now having left the capital city.

In a statement, the federal government said the cease-fire "will enable farmers to till their land, aid groups to operate without any military movement around and engage with remnants (of Tigray's former ruling party) who seek peace," adding that efforts to continue to bring Tigray's former leaders to justice will not stop.

Ethiopia said the cease-fire would last until the end of the farming season in Tigray in September.

The government ordered all federal and regional authorities to respect the cease-fire.

Neither the TLPF nor the TDF immediately responded to the cease-fire announcement.

The United Nations Children's Fund (UNICEF) accused the Ethiopian government of destroying its satellite equipment in the Tigray region on Monday.

UNICEF Executive Director Henrietta Fore said on Twitter that the act "violates UN privileges and immunities and the rules of International Humanitarian Law regarding respect for humanitarian relief objects."

Fore also said that UNICEF and other humanitarian aid programs "are not, and should never be, a target."

What happened in Ethiopia?

Fighting between the federal troops and Tigrayan soldiers began on November 4, 2020 after Ethiopian Prime Minister Abiy Ahmed ordered a military response to an attack on federal army camps in Tigray.

The Nobel Peace Prize laureate blamed the attack on the TPLF, but the TPLF denied any responsibility. The local group called the accusation a pretext for an "invasion."

Abiy rejected calls for peace talks as his army shelled and advanced on Tigray. He consideredmilitary operations "complete" on November 28, 2020.

The federal government took over the administration of Tigray soon after the fighting began and placed their own figures in leadership roles.

But the UN said there was no evidence of withdrawal and AFP obtained government documents that showed Eritrean troops looting and blocking food aid. UN High Commissioner for Human Rights Michelle Bachelet said last week that there were "credible reports" that Eritrean soldiers were still in Tigray.

An Ethiopian airstrike in a Togoga village killed 64 people and injured 180 last Tuesday in the latest chapter of violence in the conflict. While the Ethiopian military said the strike was aimed at rebels, the UN called for an urgent investigation.

The ongoing conflict has triggered a massive humanitarian crisis, with more than 300,000 people facing famine in Tigray, according to the UN. Refugees have spilled into neighboring countries, including Eritrea.