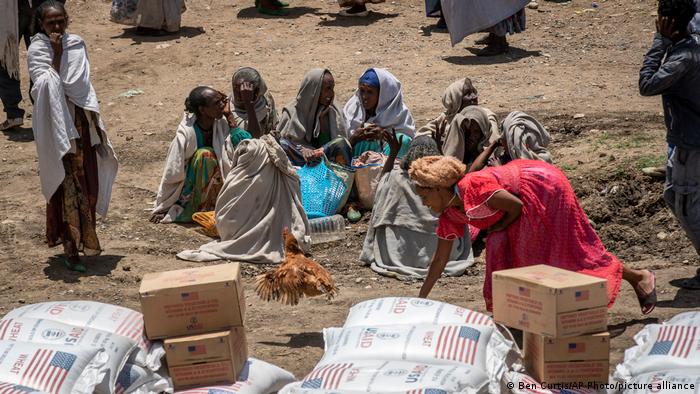 More than 350,000 people in embattled Tigray are gravely threatened by famine, with most of the province's 5.5 million people in need of food aid, a UN report said on Thursday.

UN agencies say the food crisis in Tigray was the worst since the famine that gripped Somalia from 2010 to 2012 killed more than a-quarter-of-a-million Somalis — more than half of them children.

Warning to the world

UN humanitarian chief Mark Lowcock told a virtual high-level meeting of representatives from the G7 group of major industrialized countries that "there is famine now'' in Tigray.

Lowcock warned that "this is going to get a lot worse," but said "the worst can still be avoided" with immediate action.

The UN's Food and Agriculture Organization, UN World Food Program and UNICEF on Thursday warned that another 2 million people "could quickly die of starvation without urgent action."

Lowcock lamented the fact that some of the key UN agencies seeking to help had "essentially no money."

"We really do need everybody to step up," he said.

David Beasley, head of the UN World Food Program, said countless people, especially in rural areas, could not be reached with aid because armed groups were blocking access, he said.

The agencies stressed they were prepared to provide aid but first that they first required access to the region devastated by conflict.

The Ethiopian government launched a military offensive against the Tigray People's Liberation Front (TPLF) in northern Ethiopia in November. The TPLF had held power in the Tigray region for years prior to the current government.

Hostilities soon spiraled into a complex conflict that involved the neighboring country of Eritrea, which fought a war with the TPLF-led Ethiopia.

What did the analysis find?

The Integrated Food Security Phase Classification (IPC) analysis, published on Thursday, said the 350,000 people were deemed to be living in the index's most acute "catastrophe" phase.

For some 3.1 million people food shortages had reached "crisis" levels with some 2.1 million living in "emergency" conditions.

"This severe crisis results from the cascading effects of conflict, including population displacements, movement restrictions, limited humanitarian access, loss of harvest and livelihood assets, and dysfunctional or non-existent markets," the report said.

"If the conflict further escalates or, for any other reason, humanitarian assistance is hampered, most areas of Tigray will be at risk of famine."

The IPC is a global partnership of 15 UN agencies and international humanitarian organizations, which prepared the report. Its five categories of food security range from people who have enough to eat to populations facing "Famine-Humanitarian Catastrophe."