With Ethiopia at the center of two conflicts, Prime Minister Abiy Ahmed has seen his international reputation tarnished. 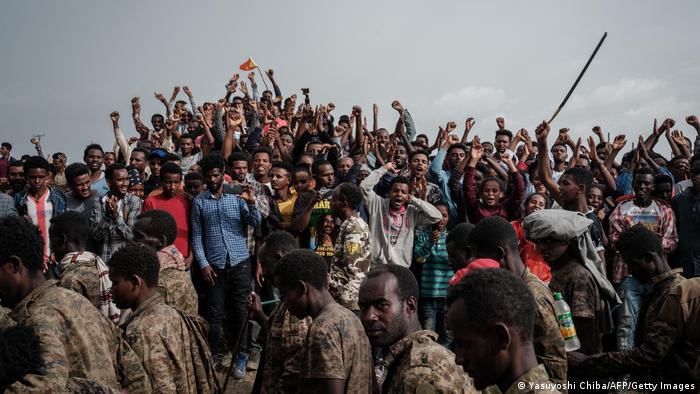 It was an unusually strongly worded press release from the US State Department informing the public about a call between Secretary of State Antony Blinken and Ethiopia's Prime Minister Abiy Ahmed.

Referring to the conflict between Abiy's federal government and Tigrayan forces in the country's northern Tigray region, Blinken "stressed the need" of an immediate and indefinite cease-fire on both sides.

He also "condemned the destruction of bridges" and the creation of obstacles to humanitarian workers, and "urged Prime Minister Abiy to commit" to a series of steps previously outlined by the UN Security Council.

The strong language in the statement, which was released on Tuesday, makes it clear just how big Ethiopia's problems currently are.

That Ethiopia is on the agenda of the UN Security Council is another sign of the trouble the country is in. Last week, the Security Council held its first public meeting on the Tigray conflict since fighting broke out last November.

Then on Thursday, Ethiopia was back on the Security Council agenda because of the dispute over its giant hydropower dam on the Nile, the Grand Ethiopian Renaissance Dam (GERD). 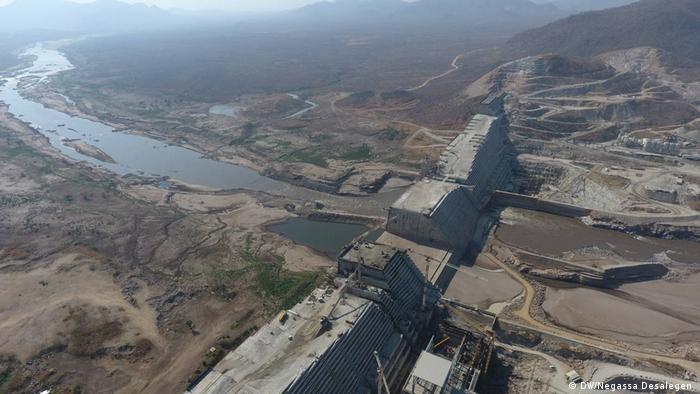 Egypt and Sudan had both called on the Security Council to help resolve the dispute after Ethiopia began the second phase of filling the reservoir behind the dam earlier this week.

The two countries, which lie downstream on the Nile from Ethiopia, view the dam as a severe threat to their water supplies. They say the Nile is a lifeline that irrigates their fields.

Sudan's capital Khartoum marks the confluence of the Blue and White Nile rivers and Sudan's south eastern region is particularly dependent on water flowing from Ethiopia. 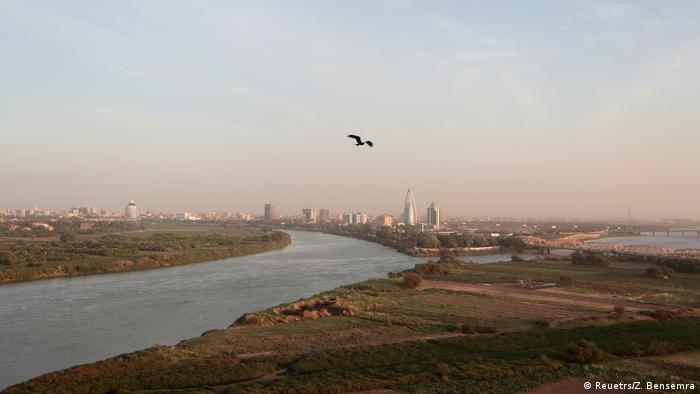 The White Nile and the Blue Nile meet in Khartoum, Sudan's capital

Ethiopia doesn't actually have a seat on the 15-member Security Council — Kenya, Niger and Tunisia currently represent the African group.

Tunisia has proposed a draft Security Council resolution that would call for a binding agreement between Ethiopia, Sudan and Egypt on the operation of the giant dam within six months. It was not clear if or when it could be put to a vote, according to the Reuters news agency.

Ethiopia is opposed to any Security Council involvement and according to Reuters, the Ethiopian UN delegation is trying hard to organize majorities in the Security Council to thwart Tunisia's proposal.

When will aid arrive in Tigray?

Sudan, which is undergoing political reconstruction since former leader Omar al-Bashir was ousted from power in 2019, is also directly affected by the Tigray conflict.

More than 46,000 refugees from Tigray have sought refuge in neighboring Sudan, according to the UN refugee agency, UNHCR.

Another 1.7 million have been displaced from their homes but remain inside the region.

The conflict, however, saw a turning point last week after the Tigray People's Liberation Front (TPLF) and the Tigray Defense Forces (TDF) drove the federal army out of large parts of Tigray, including the regional capital, Mekele. 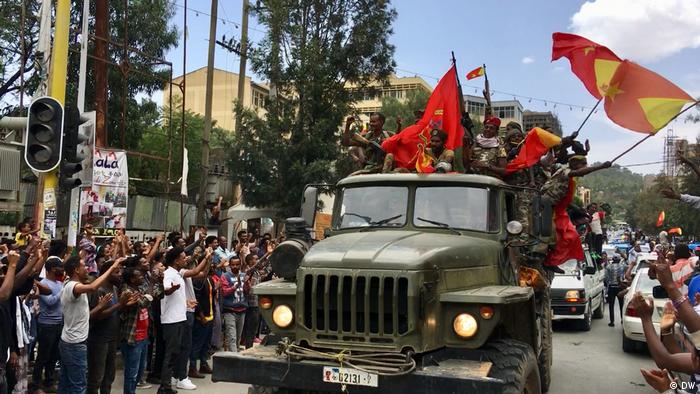 Residents of Mekele cheer the arrival of Tigray Defence Forces

Addis Ababa has now declared a unilateral cease-fire, which has been provisionally accepted by the TPLF.

They said that before the cease-fire could be formalized, however, Eritrean forces and militias from Ethiopia's neighboring Amhara province, both of which have supported Ethiopian forces in the conflict, needed to withdraw from Tigray.

"We will continue to fight until our preconditions are met," TPLF spokesman Getachew Reda told DW.

Ethiopia's ambassador to Germany, Mulu Solomon Bezuneh, said the cease-fire was made in goodwill.

"The government has left Tigray for the sake of peace. The ceasefire is for humanitarian aid to reach the Tigray region," she told DW.

On Monday, Ethiopia's government said it had agreed to allow aid flights to Tigray, where relief agencies are warning of a looming humanitarian catastrophe if more aid doesn't arrive soon to the stricken area.

But the director-general of the Ethiopian Civil Aviation Authority said that no such flights had taken off from Addis Ababa as of Wednesday this week.

The United Nations warned in early July that 400,000 people in Tigray were at risk of starvation. 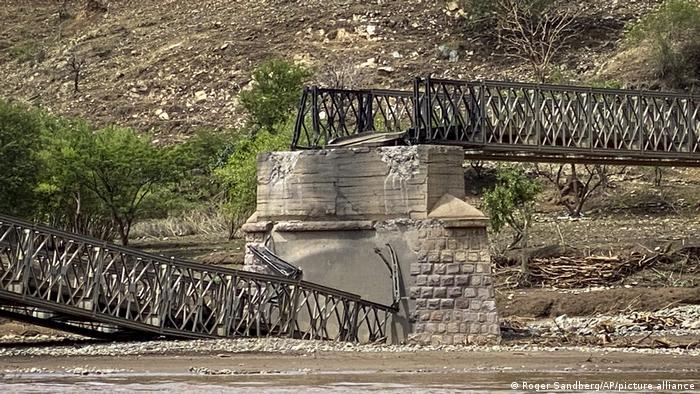 Ethiopia's government has been accused of blocking food aid into Tigray and its soldiers accused of stopping farmers from harvesting and ploughing.

Ambassador Bezuneh rejected this accusation: "It is completely untrue, because the government is trying to provide aid. It was TPLF who was even ambushing the humanitarian support, even trying to attack the convoy," she told DW.

It is hard to predict if the tenuous cease-fire in Tigray will hold.

"On the TPLF side, there is growing self-confidence because they have been able to reorganize from the ashes. And they have set strong preconditions for a ceasefire," independent analyst and DW columnist Befekadu Hailu said in a DW interview.

Until Prime Minister Abiy Ahmed took office in 2018, Tigrayans were in power in Addis Ababa — and had made enemies in neighboring Eritrea to the north, and throughout Ethiopia itself.

They could now go on the offensive against these enemies, Befekadu Hailu believes.

"They are mobilizing troops to attack their neighbors, Amharic militias in the south and west, and Eritrean forces in the north," he said. "I think it is inevitable that we will see some military confrontations between Tigray forces and its neighbors."

When Abiy became prime minister, he was hailed as a peacemaker in the multi-ethnic state, winning the Nobel Peace prize in 2019.

Now, the Tigray conflict and the GERD dam dispute have tarnished his reputation abroad.

"Many political interest groups figured out the Abiy Ahmed they were expecting was different from the real Abiy Ahmed. He was involved in the previous government and had his own ambitions. He has a kind of strongman mentality, if not an authoritarian personality," Hailu said.

"So when these groups realized that he wouldn't really represent them, they started to publicly criticize him and confront him." 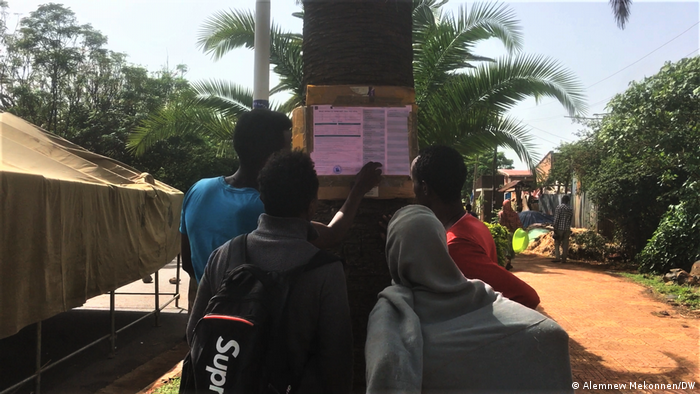 Here in Bahirdar, local results are available but national results haven't been released

With Tigray and the hydropower dam grabbing media headlines, the fact that last month, Ethiopia elected a new parliament, whose results still haven't been made public, is almost a footnote.

A landslide victory is expected for Abiy's Prosperity Party.

"The recapture of Mekele by the TPLF stole the election's thunder," Befekadu Hailu said.

"Those who were very excited about the election are now very afraid of the return of the TPLF."

This article was adapted from German by Cai Nebe. Dawit Endeshaw and Uta Steinwehr contributed to the article.

An earlier version of this article referred incorrectly to Ambassador Mulu Solomon Bezuneh's gender. The mistake has been corrected and we apologize for the error.