Prime Minister Abiy Ahmed claimed the delayed vote would be Ethiopia's "first free and fair election," despite internal conflict, famine and the fact that not everyone in the country can vote. 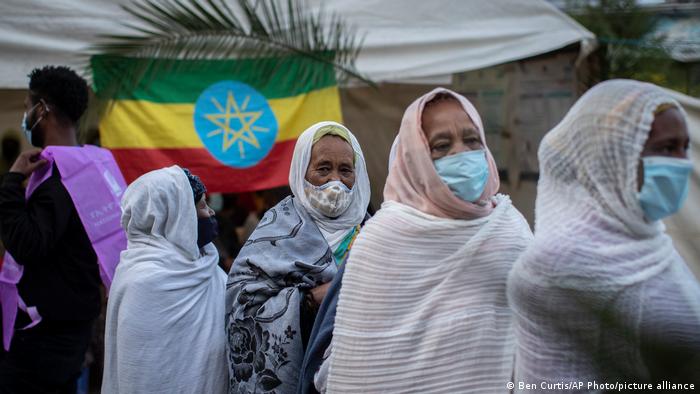 The vote was first delayed by the coronavirus pandemic, then again when civil war broke out in the northern Tigray region

Polls have closed in Ethiopia, where voters cast ballots Monday in a much-anticipated election seen as a test for Prime Minister Abiy Ahmed, who was first elected three years ago promising to deliver reform.

After polls opened early in the morning, voters lined up in the capital, Addis Ababa, amid heightened security. Polling stations around the country were also guarded.

Abiy's ruling Prosperity Party fielded the most candidates and is widely expected to win a majority and form the next government. More than 37 million Ethiopians intended to vote. The final tally is not expected for several days.

The prime minister claimed the vote would be the country's first "free and fair election," marking a break from Ethiopia's legacy of authoritarian rule. The government delayed the election last year, citing the coronavirus pandemic.

"I believe this election will shine a light of democracy on Ethiopia," one early-morning voter told the AFP news agency.

However, in May, the EU canceled plans to send election observers to the country, after requests to import communications equipment were denied.

Ethiopia responded that external observers were "neither essential nor necessary to certify the credibility of an election."

What problems does the election face?

Security problems and logistical issues, for instance, have kept ballots from being cast in more than 100 of Ethiopia's 547 voting constituencies.

The conflict between Ethiopia's government and dissident leadership in the northern Tigray region has put voting there completely on hold, with no date yet set.

The restive region should hold 38 seats in the national parliament. Ethiopian troops, as well as soldiers from neighboring Eritrea, launched an offensive in the region in November following attacks on military outposts there.

The UN warns that hundreds of thousands face famine, while rights groups like Medecins sans Frontiers (MSF) have reported deliberate military attacks on medical facilities in the region.

Adem Kassie Adebe from the International Institute for Democracy and Electoral Assistance in The Hague told DW that the legitimacy of the elections could suffer with opposition parties boycotting.

"The Tigray region is in conflict and in a large part of the country, particularly Oromia, there will not be critical opposition parties. This means that the elections will not represent the political dividing lines and the popular sentiment in that particular region," Adebe said.

Opposition groups also accused Ethiopia's ruling party of harassment and threats of violence, claiming they were kept from campaigning in some parts of the country. Some prominent opposition parties boycotted the election.

A total of 47 parties competed for seats in the House of Peoples' Representatives.

Ethiopia's election chief, Birtukan Midekssa, writing in the US-based publication The
National Interest, said the election faced "serious challenges,'' but added that more parties and candidates contested than ever before.

"I call on the international community to support Ethiopia on its democratic journey, stressful and imperfect though it is,'' Midekssa said.

The Tigray conflict has also damaged Abiy's international image as a peacemaker, since he won the Nobel Peace Prize for his role in negotiating a truce with Ethiopia.

When Tigray's TPLF dominated Ethiopian politics, Ethiopia and Eritrea fought a war and then endured years of uneasy peace.

Adebe said that Abiy's international reputation has "suffered significantly" due to the conflict in Tigray.

"Even domestically, there is a lot of anger at what people see as prevailing insecurity across the country," he added.

The US has said it is, "gravely concerned about the environment under which these upcoming elections are to be held."

Fighting continues in Ethiopia, despite Ethiopia's premier Abiy Ahmed declaring victory over Tigrayan rebels in November 2020. With elections on the horizon, has the war in Tigray done more damage to Ethiopia's unity?