A memorial service has been held in Addis Ababa for the 157 people killed in last week's Ethiopian Airlines crash. Investigators hope the plane's black box recorders will reveal what caused the disaster. 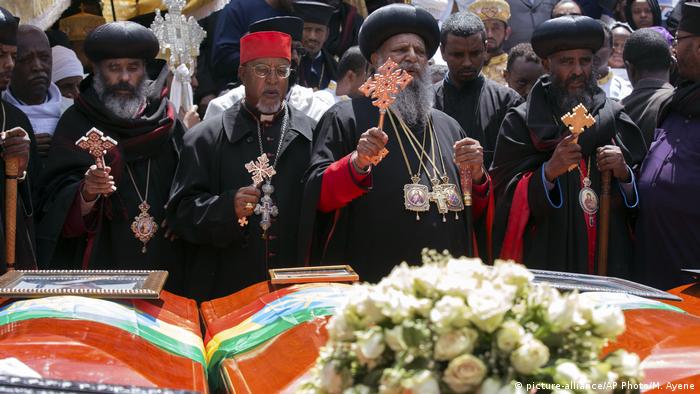 Thousands of Ethiopians gathered at the capital's Holy Trinity Cathedral on Sunday for a mass funeral to honor the 157 victims of last week's Boeing 737 Max plane crash.

A crowd of mourners accompanied a procession of 17 empty caskets draped in the national flag through the streets of Addis Ababa.

The Nairobi-bound Ethiopian Airlines Flight 302 crashed shortly after takeoff on March 10, killing everyone on board. The victims came from 35 countries.

Officials have offered relatives bags of scorched earth from the crash site to bury instead of their loved ones' remains, because most of the bodies were destroyed by fire. Authorities estimate the process of identifying the victims with DNA analysis could take up to six months.

Muslim families have already held prayers for the dead and are anxious to bury their loved ones as soon as possible, in line with Islamic burial customs. 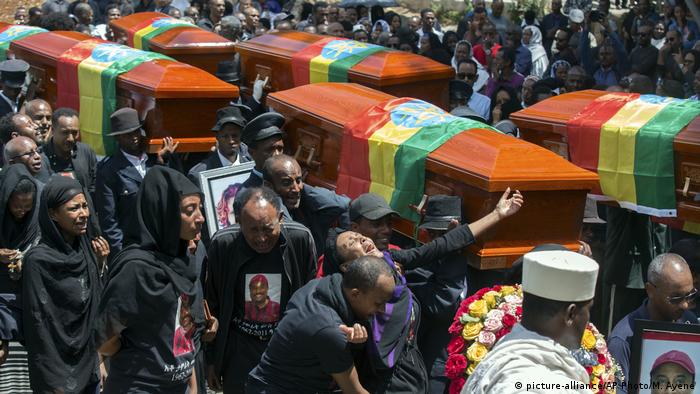 Meanwhile, investigators in Paris have begun examining the plane's black boxes in the hope of gleaning more information about the cause of the crash. Ethiopia had initially asked Germany to carry out the analysis but approached French authorities when Germany's air accident investigation agency said it did not have the necessary capacity.

Aviation authorities in the United States have said the Ethiopian Airlines flight had a similar trajectory to that of Lion Air Flight 610, also a Boeing 737 MAX model, which went down off Indonesia in October, killing 189. In both cases, the planes' erratic altitude changes suggest the pilots struggled to control the aircraft shortly after takeoff.

The suspected links between the accidents have prompted countries around the world to ground Boeing's MAX aircraft until the plane maker can prove the models are safe to fly.