All of Boeing's best-selling planes have now been grounded since the crash of an Ethiopian Airlines flight. Earlier, President Donald Trump announced an emergency order to ban the airliners in US airspace. 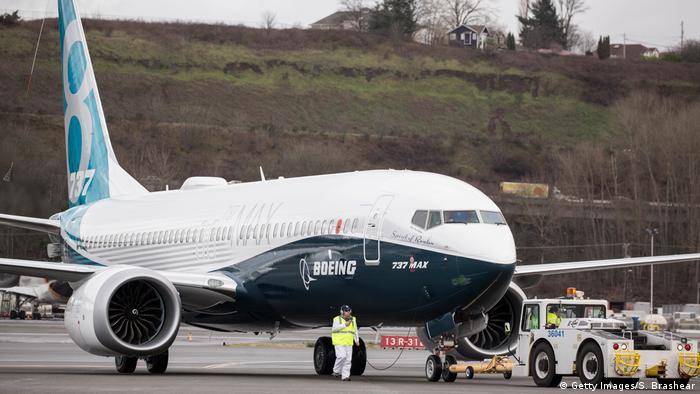 US President Donald Trump on Wednesday announced a plan to ground all Boeing 737 MAX aircraft: "We're going to be issuing an emergency order of prohibition regarding all flights of the 737 MAX 8 and 737 MAX 9," Trump told reporters at the White House.

Earlier, Canada joined the list of countries barring the Boeing 737 MAX 8 jet from its airspace. Transport Minister Marc Garneau said a comparison of vertical fluctuations found a "similar profile" for the Ethiopian Airlines flight and the Lion Air crash in Indonesia.

Canada lost 18 of its citizens in Sunday's Ethiopian Airlines crash, the second-highest number after Kenya.

Boeing has been left grappling with the grounding of its best-selling plane since  Sunday's crash that killed 157 people.Late Wednesday, the US firm said it was temporarily grounding its entire global fleet of the model.

The aerospace giant is facing increased pressure to dispel safety concerns about its 737 Max plane after regulators, including in the European Union and China, put most of the global fleet out of action.

The regulators' decision has been prompted in part by an eerie similarity between the Ethiopian Airlines crash and last October's Lion Air disaster in the Java Sea, which killed 189 people. The plane that crashed in Indonesia was also a 737 MAX. That tragedy also took place moments after takeoff and involved issues with the flight control.

But many security experts say it's too early to draw conclusions. Investigators are yet to decode the black boxes from the ill-fated Ethiopian Airlines' aircraft to determine exactly what happened during the short flight.

Germout Freitag, spokesman for Germany's Federal Bureau of Aircraft Accident Investigation, said the agency had declined a request from Ethiopia to analyze the boxes because they lacked the necessary software.

Boeing did not respond immediately to a request for comment.

First to get off the block was troubled Norwegian Air, which said it will seek compensation from the plane maker for lost revenue and extra costs resulting from the grounding of its fleet of 737 MAX.

"It's quite obvious that we will not take the costs related to the new aircraft that we have to park temporarily," Norwegian Air Chief Executive Bjorn Kjos said in a video message. "We will send the bill to those who produce this aircraft."

Norwegian is one of the worst affected among European airlines.

Bernstein Research analyst Daniel Roeska said the airline may lose around 400,000 Norwegian krone (€41,000/$46,000) per 737 MAX per day if it's forced to keep the planes grounded for a prolonged period of time.

Norwegian currently operates 18 Boeing 737 MAX and has another 92 on order.

"We have no plans to make any changes in the deliveries," Norwegian spokeswoman Astrid Mannion-Gibson told DW.

The planemaker has lost more than $26 billion (€22 billion) in market value since the crash — a rare slump considering investors are not really known to be spooked by such tragedies.

The single-aisle 737 MAX, first delivered in May 2017, has been Boeing's best-selling plane ever, with more than 350 planes registered and about 5,000 on order.

It's not the first time a Boeing aircraft has been grounded.

In 2013, the company's 787 Dreamliner fleet was grounded for over three months after a lithium-ion battery caught fire aboard a parked 787 in Boston. Days later, an overheated battery aboard a Dreamliner operated by Japan's All Nippon Airways forced an emergency landing.

Investigators later found that the batteries had a design flaw and that it should not have been certified by the FAA.

The grounding of the 737 MAX has so far had a limited impact on global operations.

"The 737 MAX makes up less than 1 percent of the global airline fleet and most operators have been able to reconfigure their operations in the short term to limit the impact on passengers," Flightradar24 spokesman Ian Petchenik told DW.

Boeing said it hopes to have the new model in service within the next two years. But the company's reputation has been damaged by crashes involving earlier versions of the MAX plane.