Ethiopia has denied reports that it started filling its massive hydroelectric dam on the Blue Nile, after satellite images showed higher water levels. The dam has sparked tensions with downriver nations Egypt and Sudan. 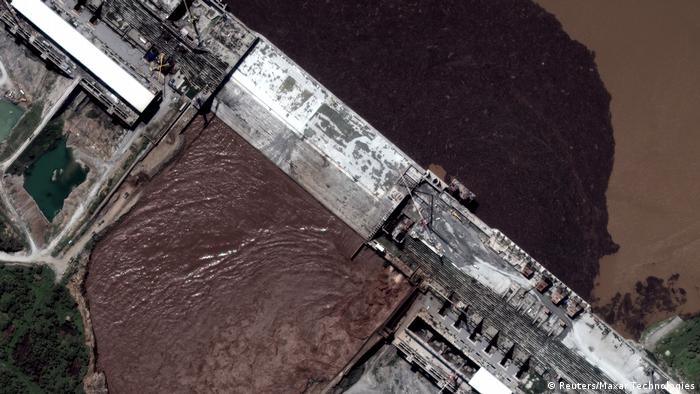 Ethiopia's water minister denied that his country has started filling up Africa's largest dam on Wednesday, a day after talks with Sudan and Egypt on the issue came to a deadlock.

Earlier on Wednesday, Minister Sileshi Bekele told the Ethiopian Broadcasting Corporation that the construction of the dam and filling its reservoir "go hand in hand" and confirmed recently-released satellite images that showed higher water levels in the reservoir.

Following reports on his remarks, the minister said that higher water levels were due to recent heavy rainfall — and not due to the conscious efforts to fill the Grand Ethiopian Renaissance Dam (GERD).

"There is a lot of water going through. There is heavy rainfall and the inflow is much greater than the outflow," Seleshi told news agency dpa.

The government of Sudan said on Wednesday that it rejects any unilateral actions with concerns to the dam while negotiating efforts with Ethiopia and Egypt continue.

The statement, released by Sudan's Irrigation Ministry, also said water levels on Sudan's side of the Blue Nile dropped by 90 cubic meters in one day.

Following the reports, Egypt's Foreign Ministry said it was urgently seeking clarification from Ethiopia on the issue.

On Tuesday, the three countries failed to reach an agreement on regulating water flow from the dam.

Ethiopia says the $4.6 billion (€4 billion) project is crucial to expanding its power exports and is an opportunity to pull millions of its 110 million population out of poverty.

Downstream Egypt and Sudan have voiced concerns since construction on the dam started in 2010. Egypt says the dam poses an existential threat to its citizens, as the country relies almost exclusively on the Nile for farming, domestic water use and its industry.

In June, Egypt took the issue before the UN Security Council, seeking a legally binding agreement on water flows and a legal mechanism for resolving disputes.

Ethiopia wants to fill Africa's most powerful hydroelectric dam even without a deal with Sudan and Egypt. Talks on how much water will pass through the Nile dam are deadlocked. The spat threatens the region's security. (22.06.2020)

Ethiopia is adamant it will not be strong-armed by the US in talks to end the Grand Ethiopian Renaissance Dam dispute. As the US swings from observer to power broker, the stalemate is splitting the Arab world and Africa. (06.03.2020)