Not exactly an idyllic place — and yet for locals, this run-down vacation colony is a good enough spot to spend the summertime. Esther Kinsky takes us along on a journey through the Hungarian wasteland. 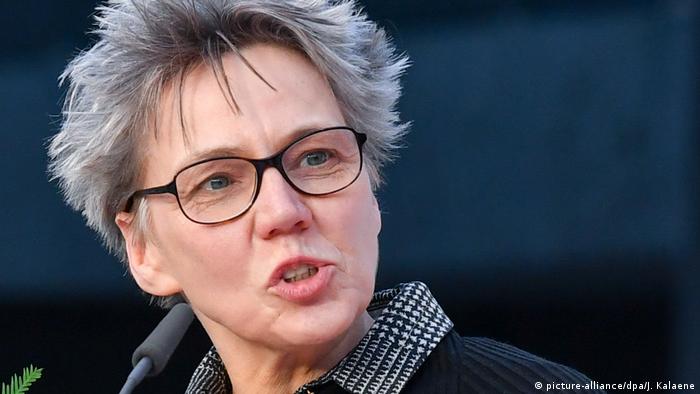 The holiday village has seen better times; outsiders rarely pay a visit to the wasteland in the sparsely populated part of southern Hungary. Esther Kinsky walks us through the "üdülo" — the Hungarian word for a vacation park — where the summer houses are waiting for their annual short-term revival in her slim novel, Summer Resort.

The run-down post-Communist colony attracts all those who can no longer stand to stay at home during perfect holiday weather. A river offers a welcome place to cool off. Only very rarely do tourists from outside the community make their way there.

The only thing that speaks of the carefree days of summer, however, is the beer. There is little work for anyone; there is nothing left to earn in the factory. All that remains is seasonal work. And not everyone can afford to spend their holidays at Üdülo.

The "swimming pull" (sic) offers the locals a refreshing change of pace, distracting them from their summer boredom. Pub owner Lacibásci, who's earned a bit of cash as a junk dealer, has ordered it. It quickly becomes a sensation in the village; every one is talking about it.

Proudly — bombastically — he has placed it in the middle of his yard, surrounded by wrecked cars and rusty spare parts, for his wife and many of his grandchildren and nephews' enjoyment.

"The truck drivers on the mail road sounded their horns when they passed Lacibácsi´s garden, and the swimmers in the waist-high water waved back. The turkeys gobbled with inflated twitching necks, moved from one corner to the other in the yard, pecked between scrap and colorful swimming pool toys, while Ruthwoman squatted and smoked and thoughtfully gazed at rusty objects. ..." A life along a river landscape: Esther Kinsky set her novel in southern Hungary

The soul peters out

In her novel, Kinksy tells the stories of people in a time of transition. After the fall of the Iron Curtain in 1990 and the subsequent political upheaval in Eastern Europe, Hungarians are experiencing a period of complete destabilization. Nothing is the same as it had been, little has survived. The future is only a vague gleam on the horizon.

The ritual of driving back to the old, shabby vacation colony every summer is a lifesaver in this new period — even if the summer resort is not exactly relaxing.

"The cups and bottles, plates, spoons. Everything in its place. Summer. On weekdays it was still quiet in the üdüló, but the bar already smelt of what had been left behind from the weekend: spilt beer, sweat, the girls' summer perfumes, the exhaust clouds of the motorcyclists and helpless chlorine bleach with urine."

The narratives see flirtatious "Kozak boys from the city" meeting young girls in miniskirts and glittery shoes, named either Zsusa or Marika; there's a shared feeling of stranded existence, hopelessness. They are unemployed, thrown off track by the unfamiliar turbo capitalism. They all dream of love and newly won freedom.

Poetically condensed, Kinsky draws a strong visual sketch of how fractions in a person's life can lead to cracks in the landscape of the human soul. Nature, too, bears the marks of this feeling of being lost.

"The sky was white with soft gray pillows. Clouds that did not know where to go, because the scrubby-pale land below did not want them."

Writing as a second step in her career

Before Esther Kinsky (born in 1956) wrote her first own book, she worked as a translator into German from Polish, Russian and English. Her specialty was poetry (works by Hanna Krall, among others).

Word for word, almost barren, with enormous linguistic power, she captures the melancholy desolation of this borderland between Hungary, Romania and Serbia in her novel. Relentlessly, she describes the precarious social structure in which a lack of prospects determines everyday life. 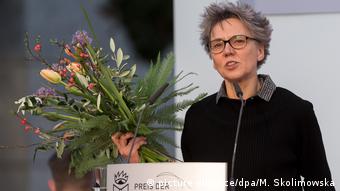 Kinsky, who grew up in Germany's Rhineland region, lived and worked in the sparsely populated Banat region for many years. After years of living in the hustle and bustle of London, she moved to Eastern Europe in 2004, first venturing to Budapest and then to southern Hungary — all without speaking the local language. While on a trip, she spontaneously bought a vacant house. And stayed. The simplicity of life there gave her the peace to write.

Archaeologist of the everyday

Today, Esther Kinsky lives and works as a writer in Berlin. Quite successfully at that. She returns to the Hungarian border region for only a few weeks each year. The gap between idyll and precarious nightmare was something that she, a "stranger," could not have overcome for a longer period. She had to move away, to bury the dream of a simple life in the countryside.

What has remained for her are the strong summer images of an area detached from ​​capitalist prosperity.

"The melon sellers set up their stalls at street corners. The green watermelons shone, patient beasts, herds which had ended up here. Beside them the yellow melons, gray, rough-skinned and fragrant, unyellow, the only aroma that could assert itself against the metallic midday glow."

Between 1987 and 2018, Esther Kinsky published children's books, novels and poems. In 2016, she took over the post of "Thomas Kling Poetry Lecturer" at the University of Bonn. She won the Leipzig Book Fair Prize in 2018 for her work, Hain: Geländeroman (not yet translated into English).