The Turkish president has vowed not to back down from the latest military campaign against Kurdish militants in the PKK. He has sworn not to rest until "concrete is poured" over the "terrorist" weapons. 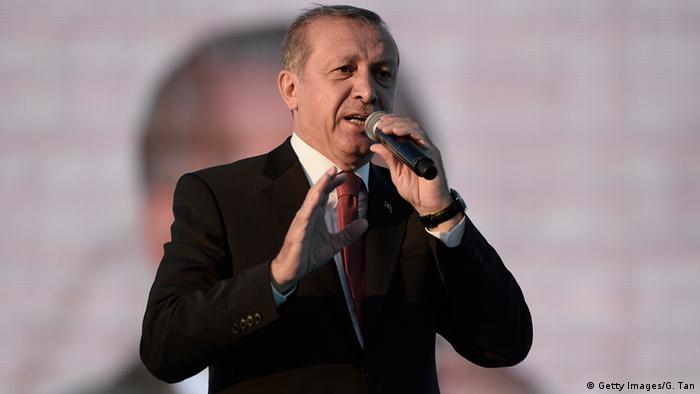 Turkey's President Recep Tayyip Erdogan swore on Tuesday to continue the relentless campaign against Kurdish militants until "not one terrorist" remained standing. As he spoke at a military ceremony, Ankara launched renewed strikes against Kurdish rebels within Turkey's borders.

Turkish warplanes struck 17 targets in the province of Hakkari on Monday and Tuesday as part of a renewed crackdown on the forbidden Kurdistan Workers' Party (PKK), which had until recently been in peace talks with the government after many years of insurgency.

Critics said that Erdogan's "synchronized war on terror," which was announced last month, was simply an attempt to win back nationalist support after his AK Party suffered a major election setback in June. Although this two-pronged military strategy is also supposed to help in the fight against "Islamic State" (IS), terrorists, most of the targets have been in northern Iraq, the heartland of the Kurdish population there. Far less emphasis has been placed on IS targets in bordering Syria.

"Our fight will continue until not one terrorist is left within our borders and until concrete is poured over (their weapons)," Erdogan said in his speech, adding that he was "not talking about laying down arms, I'm talking about burying them. I'd like to emphasize this."

On Monday, four Turkish police officers died in a roadside bombing claimed by the PKK. A Turkish solider was also killed overnight in another incident blamed on the PKK. Around 30 members of Turkey's security forces have been killed by the PKK since the renewal of violence.

Figen Yuksekdag, co-leader of the Peoples' Democratic Party (HDP) - which won 13 percent in Turkey's general elections - wants Ankara to cease military attacks on Kurds in Iraq, the subject of recent protests in Germany. (09.08.2015)