Rallying against Erdogan and ′Islamic State′ in Cologne | Europe | News and current affairs from around the continent | DW | 08.08.2015

Kurdish groups and supporters from other organizations took to the streets on Saturday to voice their anger about how the Turkish government treats Kurds. The event remained peaceful except for one small incident. 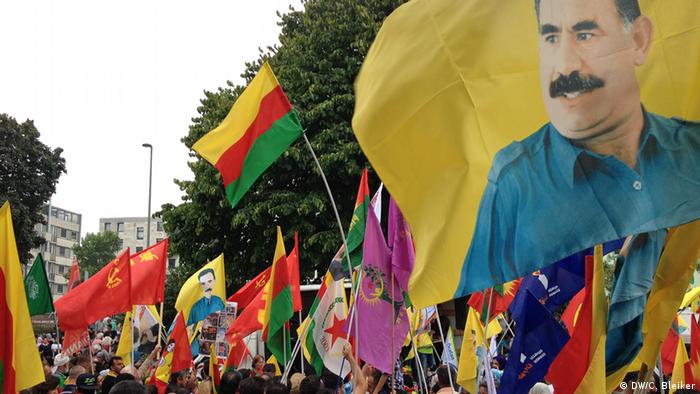 Ebertplatz in Cologne was filled with people on Saturday. German, Turkish and Kurdish men and women of all ages were waving flags, chatting and laughing. A small booth off to one side sold baked goods, and a mother was pushing a sleeping toddler around in a stroller. If it wasn't for the stage with a rotating cast of speakers, one could have mistake the scene for an intercultural fair.

When one woman yelled "Long live Kobani, long live the resistance" into the microphone in Kurdish, the crowd erupted into cheers and repeated the phrase back to her. Clearly, the people hadn't come to the central square for fun - they had come because they wanted to take a stand against the way Turkey has been treating the Kurds.

The motto of the protest organized by the Democratic Center of Kurds in Germany (Nav-Dem) was "Stop the war." It was directed at the terror of the "Islamic State" (IS), but also at the attacks Turkey has recently launched against Kurdish cities and bases in northern Iraq, the organizers said.

The Justice and Development government of Turkish President Recep Tayyip Erdogan officially ended strenuous negotiations with the Kurdistan Workers' Party (PKK) in July. "It is not possible for us to continue the peace process with those who threaten our national unity and brotherhood," Erdogan said. 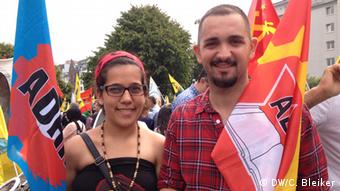 Tayfun said Saturday's message was one of unity

A fragile truce between Turkey and the PKK - considered a terrorist organization by the government - had been in place since March 2013.

"The Turkish government is trying to suppress anyone who's voicing their own opinion," Tayfun, a young Turk who traveled to the protest with his friends, told DW at the rally. "The Turkish state is saying that Kurds and those on the left are terrorists, but they are really terrorists themselves."

Since the end of the peace process, Turkey has carried out several airstrikes against Kurdish camps. But Erdogan has also suggested political measures against Kurdish parliamentarians: He said politicians with links to "terrorist groups" should be stripped of their immunity, a move that was largely seen as targeting Turkey's pro-Kurdish People's Democratic Party (HDP).

'Situation in Kurdistan is atrocious'

The colorful flags of a host of different organizations flew. Fifteen-year-old Elena waved the banner of the Union of the Communist Revolutionaries of Turkey (TIKB), while Mazlum, a young Kurd, proudly wore a scarf in green, red and yellow - the colors of Rojava, the Kurdish regions in Syria, also known as Western Kurdistan.

"The current situation in Kurdistan, where ISIS is carrying out massacres, is atrocious," Mazlum said, using an alternative acronym for IS. "But I also want to protest the fascist attitude of the Turkish government toward Kurds and any other minority. Women's rights, press freedom - basically any freedom a regular human should have is being suppressed in Turkey again and again." 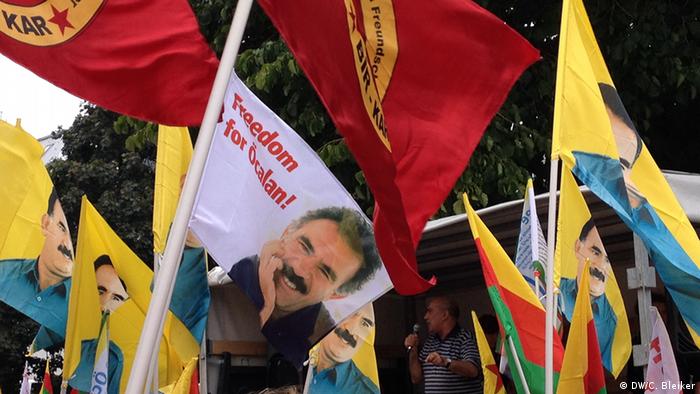 "Erdogan's fight against IS is a farce," Ayten Kaplan, one of the co-organizers of Saturday's protest, told DW. "It's just an excuse to attack the Kurds."

She also lamented that no one in Europe or NATO was openly criticizing the Turkish president.

During the rally on Ebertplatz, however, Germans stood next to Turkish and Kurdish protesters.

Wayne and Vivian drove more than three hours from Hanover to be in Cologne. "Erdogan's actions are unacceptable," Wayne told DW. "He's fooling all NATO members. Germany has to distance itself from him - he is a virtual partner of IS." 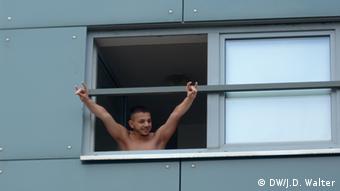 Later in the afternoon, the crowd left the square for a march through Cologne. On the way to the central Heumarkt square, a small kerfuffle broke out when a resident of one of the houses along the way leaned out a window and used his hands to make the sign of the Grey Wolves, a right-wing nationalist party in Turkey.

Several protesters started yelling and attempted to throw objects at the man. Police officers prevented the protesters from entering the building and instead did so themselves.

Aside from this, the peace event remained peaceful. Mazlum said he appreciated that Cologne was such a multicultural city, one where demonstrations like this were possible.

"We're making use of our democratic rights," he said, "and that's a great thing."

Kurdish militants have been blamed for an attack that killed three Turkish soldiers when a roadside bomb exploded. The latest deaths continue a spiral of violence between the militants and the Turkish military. (04.08.2015)

Turkey is continuing an air campaign against Kurdish rebel targets in northern Iraq in the face of international calls for it to resume a peace process. At least six people were reported killed in the latest attacks. (01.08.2015)