The day North Korea fired a missile over Japan, the French president used a key speech to describe the battle against Islamist terrorism as his "top priority." 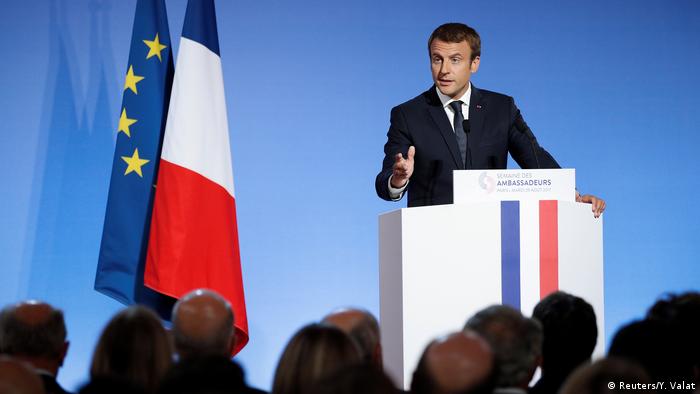 "Providing security for our citizens means that the fight against Islamist terrorism is our first priority," he told a crowd of some 200 French ambassadors gathered in Paris.

France has suffered a number of terror attacks in recent years, which have claimed more than 230 lives.

On the day North Korea fired a missile over Japan, Macron urged a tough international stance saying France was ready to do "everything possible… to bring Pyongyang to the table."

The country's youngest-ever president also confirmed his support of the 2015 Iranian nuclear deal, which has been repeatedly criticized by his American counterpart, President Donald Trump.

"There is no alternative to the nonproliferation agenda. It enables a constructive and demanding relationship with Iran," explained Macron.

In a wide-ranging speech covering a host of topics, Macron went on to condemn Venezuela's "dictatorship," which is currently facing deadly street protests. "A dictatorship is trying to survive at an unprecedented humanitarian cost, even though the resources of the country remain significant," he said.

Nearly 130 people have died in the last four months of clashes between the Venezuelan government and protesters.

The 39-year-old, who was elected four months ago, also said he would announce new initiatives on the future of the European Union after German elections next month.

"I would rather build the future than go over the past," Macron told diplomats, adding, "Brexit should not take up all our energy."

Macron recently toured Central and Eastern Europe, where he pushed plans for labor reforms within the EU. In the spring, he said he planned to visit Israel, Lebanon and other neighbors to help with the Middle East peace process.

Macron initially won approval for his bold start on the international stage, hosting both Trump and Russian President Vladimir Putin in his first weeks of office. However, over the last four months, Macron has suffered the worst drop in popularity by a new French president in 20 years.