Eid al-Adha and the fight for animal hides in Pakistan

Sacrificing an animal is a vital part of the Eid al-Adha ritual, but the festival is also a money-making affair as the animals' hides generate large sums of money. In Pakistan, Islamist groups have a monopoly over it. 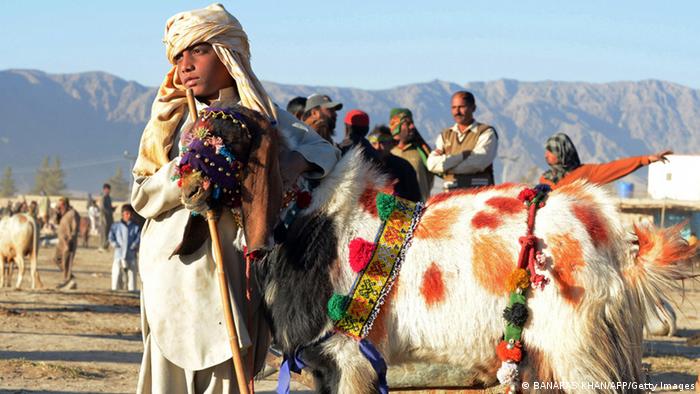 The Muttahida Qaumi Movement (MQM), a popular party in Pakistan's economic hub and port city Karachi, announced over the weekend that it would not collect animals' hides on this year's Eid al-Adha festival.

The MQM leaders complain that an ongoing military crackdown on its workers is hindering its political and social activities, thus for the first time in three decades its charity group "Khidmat-e-Khalq Foundation" is excluded from the Eid affairs.

The MQM collected around 60-70 percent of total hides from the city last year.

During the Eid al-Adha holiday, which marks the willingness of Abraham to sacrifice his son on God's command, the believers slaughter sheep, goats or cows and share the meat with family, friends and the needy. But the festival is also a money-generating activity. From the purchase and slaughter of animals to the collection of their hides, the Eid al-Adha is a huge business in the Muslim-majority South Asian country. 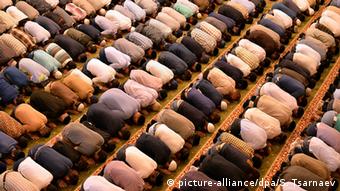 The world's 1.5 billion Muslims marked the start of Eid al-Adha, or the feast of sacrifice, on Monday

Across the country, political parties and religious groups receive an estimated amount of 2.5 to 3 billion rupees (25.6 million euros) from the sales of hides every year.

"We receive around 30-35 percent hides of our yearly demand during the Eid al-Adha," said Muhammad Ikram, secretary of the Tannery Association in Karachi.

According to the association's last year's report, nearly 7.3 million animals were sacrificed on Eid al-Adha in 2014, including 2.5 million cows and buffaloes, 4 million goats, 0.8 million sheep and 30,000 camels.

Pakistan is known for producing quality leather products as some 800 tanneries in the country prepare finished leather from cow, buffalo, sheep and goat hides.

Ramadan is a holy month for most Muslims. But for extremist organizations in Pakistan, it is also an opportunity to rake in cash through charity donations. DW examines why Islamabad has turned a blind eye. (21.07.2014)

'Traitors' and 'villains' - Has Islamabad learnt anything from Bugti's killing?

Ten years since the killing of Baloch separatist Akbar Bugti, Islamabad continues its confrontational approach with the leaders of ethnic groups, calling them "traitors." Experts say it doesn't bode well for the country. (26.08.2016)

Experts say that the 'apparently harmless' Sunni religious congregation of Raiwind provides ideological and cultural impetus to many extremist Islamist groups and organizations, including the Taliban. (19.11.2012)

"The hide collection is done in a very organized manner in Pakistan. Usually, the charity groups, the administrators of local mosques, and the representatives of religious and political parties go to the people's homes before the Eid and tell them to donate the hides to them," Nasir Tufail, a journalist at Pakistan's Geo TV, told DW.

"But the whole affair involves large sums of money, so things are not always very smooth. In the past, we have seen rival political activists attacking the vans full of animals' skins and stealing the goods," Tufail added.

A 'profitable' festival for militants

As the MQM is out of the scene, the Islamic parties and seminaries get a free hand in Karachi.

"Banned militant organizations fundraise millions of dollars on the occasion of Eid al-Adha while political parties such as the MQM are not allowed to fundraise for genuine charity reasons. In fact, every year on the Eid, the jihadists fundraise hundreds of thousands of dollars," Arif Jamal, a US-based expert on Islamism and Pakistan, told DW.

Tufail agrees with Jamal's assessment: "The religious groups, including the banned organizations, are benefiting from the MQM's boycott this year. But nationwide, the Islamist outfits, including the ones that call for a jihad in Kashmir and Afghanistan, always receive the lion's share. Charity groups like the Edhi Foundation do not have access to small towns. It is the mosque's cleric that gets the hides," Tufail said.

Due to a lack of trust in state institutions, most Pakistanis prefer to donate money or hides directly to private welfare organizations. Although quite a lot of legitimate charity bodies are doing remarkable work in the Islamic Republic, extremist groups are the ones who rake in millions of Pakistani rupees during Ramadan and Eid to fund their activities.

Observers say that banned militant organizations with links to al Qaeda and the Tehreek-e-Taliban Pakistan (TTP) generally become very active during certain Islamic months as they seek charitable donations from individuals. These groups work under different names and create foundations - which appear to be legal at first glance - to solicit funds, thus making it difficult for the authorities to restrict their activities. 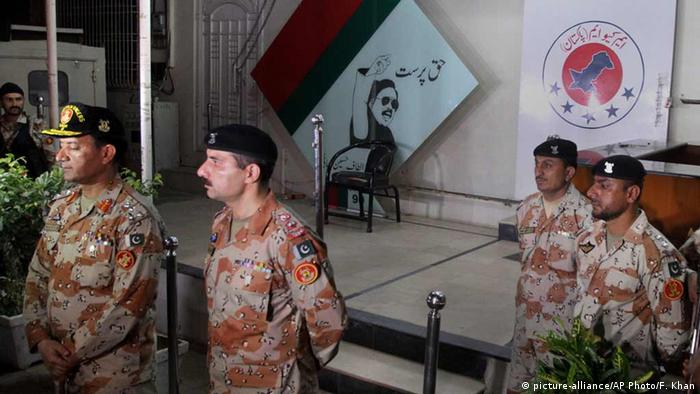 Yahya Mujahid, a spokesman for the Islamist Jamatud Dawa group, denies these allegations. "There's no proof that our organization has links to terrorism. The country's courts have cleared us, thus we have the right to collect donations," Mujahid said.

But why has the government turned a blind eye to the activities of banned Islamist groups?

Arshad Mahmood, a social activist in Islamabad, says that despite being outlawed by the government, the militant organizations have a big following in the country, and that is why they are able to collect huge donations.

"The banned militant outfits keep a public face in the form of charity organizations. The ban does not affect their structure and their network in society. No non-religious welfare organization can compete with these groups because people like to donate to religious bodies," Mahmood told DW, adding that this strategy enables the organizations like the Tehreek-e-Taliban Pakistan to collect millions of dollars annually. 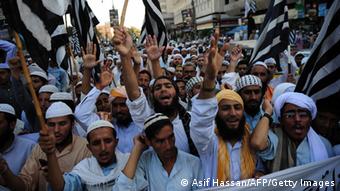 Tufail goes a step further and accuses the security forces of giving protection to Islamic groups.

"The MQM complained last year that the paramilitary force, Rangers, was threatening its supporters not to donate hides to the party's charity group. Last year, Wasim Akhter, an MQM official and the Mayor of Karachi, even accused the security forces of stealing the hides from their offices," Tufail said.

In short, Tufail underlines, whoever has the power, gets the hides.