At least nine people have been killed in attacks on a church and a store in Cairo. Islamist militants have increasingly targeted the Coptic Christian community.

A gunman opened fire on Friday outside a church on the outskirts of Cairo before attempting to storm the building, leaving seven people dead, including a police officer.

Earlier reports by security sources said at least two attackers were involved. One was shot dead and another fled the scene. The Interior Ministry did not explain the reason for the different accounts.

A gunman involved in the church attack had earlier shot at a store, killing two people inside, the ministry said, saying the shop was owned by a Copt and that the two dead were Christian men.

Egypt has witnessed an increase in attacks against the country's Coptic Christian community and its places of worship over the past year. 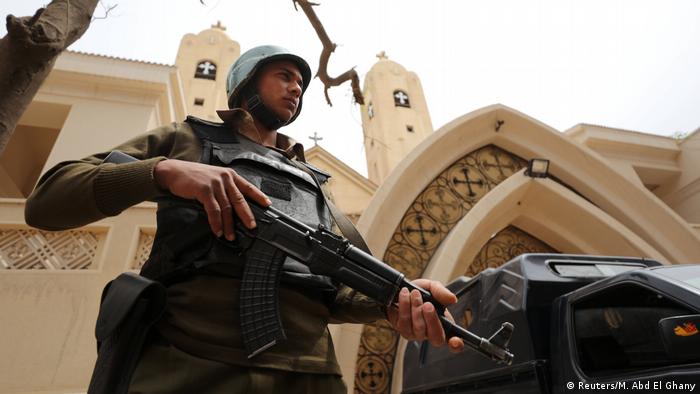 Egypt's president has vowed to protect the Coptic Christian community, which widely supported him during the coup that ousted Egypt's first democratically elected president, Mohammed Morsi of the Muslim Brotherhood

TheUS embassy in Cairo condemned the attack, saying Washington "stands steadfastly with the people of Egypt in the face of such cowardly attacks."

Warning of growing violence against Christians in Egypt, Coptic Bishop Anba Damian told DW: "We are convinced that the extremists' aggression and the intensity of their terrorism have increased in such an enormous way that it's now tantamount to a declaration of war against Copts."

Earlier this year, Human Rights Watch accused the Egyptian state of not doing enough to protect Coptic Christians, saying: "The deep-rooted sectarianism in many places in Egypt provides the climate where this hateful ideology can fester, but states of emergency have been the path to more abuses, not greater protection for Christian lives."

Who are Egypt's Coptic Christians: Coptic Christians are an Orthodox Christian community that arose from the Coptic Church, which tradition says was established by Saint Mark, one of Jesus' apostles according to their scriptures.

Why are they targeted in Egypt: While intercommunal relations between Christians and Muslims can sometimes be strained in conservative areas of Egypt, tensions had rarely transformed into outright violence until the rise of the "Islamic State." The militant group has urged its sympathizers to carry out attacks on "non-believers," especially Egypt's Coptic Christians. Muslim worshipers who do not adhere to the extremist group's fundamentalist version of Islam have also been targeted.

What happens next: Egyptian authorities will continue a manhunt to find one of the perpetrators who managed to flee the scene after the attack. Authorities have launched an investigation into the attack.