Hundreds of Muslim demonstrators have reportedly assaulted an Egyptian Coptic Christian church south of Cairo. This marks the latest in a series of assaults on members of the country's Coptic minority. 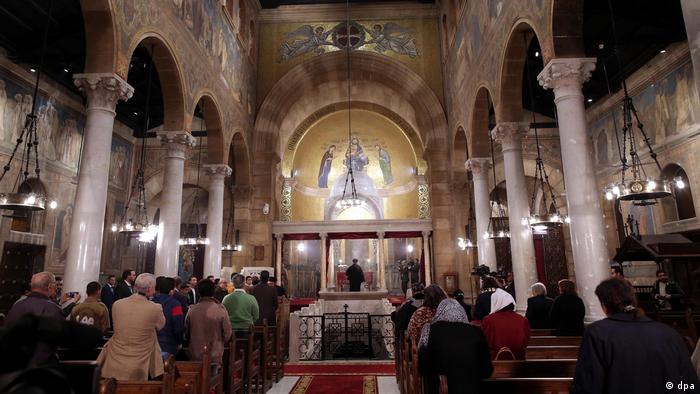 The incident took place at the Prince Tawadros church in Giza, 100 kilometers (60 miles) outside Cairo, following Friday prayers at a nearby mosque. Demonstrators gathered outside the church building in the afternoon and stormed it, chanting hostile slogans and calling for the church's demolition.

The diocese in Atfih said in a statement that the church's contents were destroyed during the attack and that Christians worshipping at the church were assaulted before security personnel came to their aid. It also said that the wounded were transferred to a nearby hospital but didn't elaborate on numbers or the nature of their injuries.

The church, yet to be sanctioned by the state and thereby gain full legal recognition, has been observing prayers for 15 years. Despite laws recently being eased, local authorities continue to refuse to give building permits for new churches, fearing protests by Muslim conservatives.

Egypt's Coptic Christian minority comprises about 10 percent of the country's population of 93 million people, and is the largest religious minority in the Middle East. They have been targeted by jihadist militants in a series of attacks since December 2016 leaving more than 100 dead and scores wounded. The "Islamic State" terror group has vowed to keep making Coptic Christians a main target for their attacks.

As people around the world prepare to celebrate Christmas and New Year's, Egypt says it has introduced heightened security measures.

Egyptian official say militants who attacked a bus full of Coptic Christians in Egypt on Friday were trained in Libya. The Egyptian air force reportedly bombed the alleged camps, destroying them. (27.05.2017)