Eduard Shevardnadze: A Soviet-Georgian life of global importance | World| Breaking news and perspectives from around the globe | DW | 07.07.2014 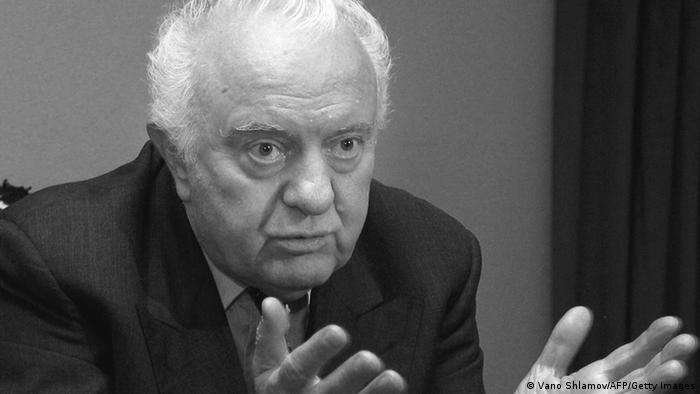 The appointment of Georgian party leader Edward Shevardnadze as Soviet foreign minister in July 1985 surprised many at the time. The 57-year-old did not have any experience with regard to foreign policy. He had quickly made his career within the party and as a civil servant in Georgia. As Georgia's Communist Party leader, he had strong ties with the KGB and had made a name for himself in the fight against corruption and favoritism in the Soviet republic. He was a perfect match for Mikhail Gorbachev, who had only been in office as general secretary of the Soviet Union's Communist Party for a few months himself.

Not only did both Gorbachev and Shevardnadze hail from the Caucasus, where they had been acquainted with one another since the early 1960s, but both also shared the vision of giving an ailing Soviet Union dominated by corruption and mismanagement a new economic perspective.

In the mid-1980s, the stagnating Soviet economy was threatening the legitimacy of the communist regime and the ideology of victorious socialism. In order to improve living standards amongst the grumbling population, both men aimed to divert resources from arms and heavy industries into consumption. But they needed a policy of detente in the conflict between East and West, in particular with the US.

Over the following five years, Shevardnadze wrote world history as Gorbachev's foreign minister through what would later become known as his policy of "new thinking." His and Gorbachev's names will forever be associated with the disarmament treaty with the US, the withdrawal of Soviet troops from Afghanistan and the non-intervention in the peaceful revolutions in East-Central Europe.

Germans will forever see Eduard Shevardnadze - just like Mikhail Gorbachev - as one of the fathers of German reunification. In his position as the Soviet Union's representative in the two plus four negotiations, he helped realize Germany's reunification against the resistance of many old-style Soviet communists and army generals in Moscow. In the end, Shevardnadze became one of the leading figures in ending the Cold War between the US and Soviet Union, which brought him much international acclaim. 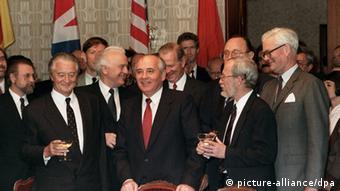 But in December 1990, Shevardnadze announced his resignation from the position of Soviet foreign minister. He warned of a looming dictatorship in what was a protest against those forces resisting further reforms in the Soviet Union and fighting against the breakup of the Communist regime.

He continued working within in Gorbachev's political sphere, but the coup against Gorbachev in August 1991 and the breakup of the Soviet Union in December ended Shevardnadze's role in Moscow.

Leaving Moscow did not mean Eduard Shevardnadze's political career was over, however. He returned to Georgia, which was in a bad shape politically and economically, to take over power in the Caucasian republic that had just become independent from the Soviet Union.

Elections in the fall of 1992 brought him a landslide victory. Over the following ten years - he was President of Georgia from 1995 onwards - he managed to stabilize the country, despite the secessions of the republics of Abkhazia and South Ossetia.

But his political course in Georgia was not to be crowned with a happy ending. In his last years as the country's president, Shevardnadze ultimately put the brakes on Georgia's breakthrough as a democracy and market economy. He seemed to be more actively engaged in securing his own stay in power through favoritism and corruption than in developing Georgia as a rule-of-law state. When there was voter fraud in the parliamentary elections in November 2003, mass rallies led Georgia toward the so-called Rose Revolution. It was an inglorious end to his term in office, but at least power was handed over peacefully, without any bloodshed.

When Shevardnadze stepped down on November 23rd, 2003, his political era ended in Georgia, and he left politics for good.

Shevardnadze then started writing his memoirs. "Democracy was my biggest goal," he told DW in an interview on the occasion of the launch of his autobiography.

Eduard Shevardnadze achieved only a part of that goal. His crucial achievements as Soviet foreign minister are now overshadowed by the abrupt end of his political career as an ageing president who clung to power for too long.

Georgia goes to the polls

Georgian citizens have voted in parliamentary elections which are being closely watched by Europe. Whether Georgia should prioritize relations with the West or Russia is a key election issue. (01.10.2012)