The Economic Community of West African States has reacted to putsches in the region with appeals, sanctions or troop deployments. But criticism of the bloc's inconsistent actions is growing. 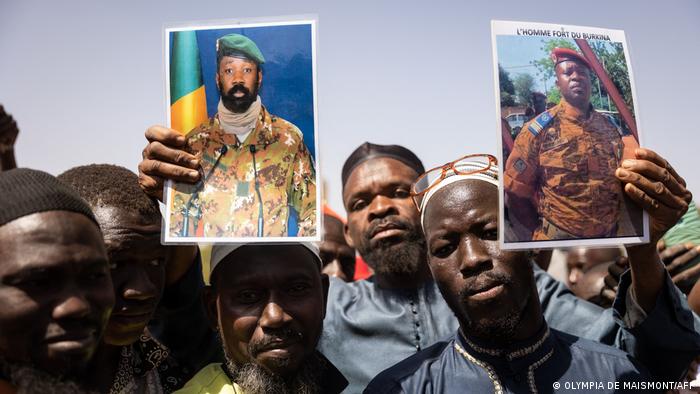 "The West African region is suddenly back in the international headlines for all the wrong regions," Ghanaian President Nana Akufo-Addo said at the end of March. He appealed to lawmakers in Accra to support regional bloc ECOWAS' current zero-tolerance approach for military coups.

Mali, Guinea and Burkina Faso have all recently experienced coups. Only a coordinated stance by ECOWAS member states could put the coup plotters in their place, President Akufo-Addo said on Twitter.

Historian Arthur Banga from Ivory Coast's Felix Houphouet-Boigny University also argued for a resolute "zero-tolerance policy" towards coup plotters, which must be enforced by ECOWAS.

"We must not accept that the democratic order in our region is repeatedly endangered by coups. West Africa must be able to effectively combat military coups and those responsible," Banga told DW.

"It's necessary to support ECOWAS in enforcing sanctions on coup plotters." 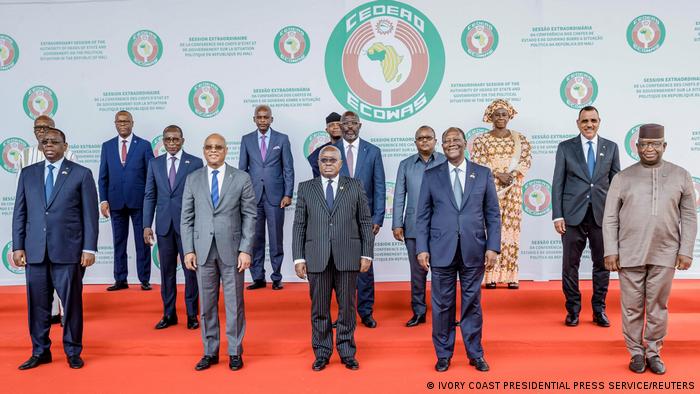 Leaders of the Economic Community of West African States

At the most recent ECOWAS summit in the Ghanaian capital on April 29, 2022, it became clear how little power the West African bloc  actually has in dealing with coup regimes.

The military juntas in Mali, Guinea and Burkina Faso were once again called upon to return political power to civilian hands as soon as possible.

But the appeals fell on deaf ears: All three juntas signaled that they wanted to hold on to their power for the time being and not accept the deadlines set by ECOWAS for relinquishing power.

The ECOWAS measures against coup regimes vary from case to case. However, one thing can be observed in all cases: The measures and sanctions adopted are not consistently enforced. So far, the coups have had no significant consequences.

Most observers agree that supranational bodies — which establish, enforce and monitor internationally-binding rules — are needed urgently.

Recently, many things have gone wrong in this respect, and ECOWAS has not been able to step up to the task, as the examples of Mali, Guinea and Burkina Faso illustrate. 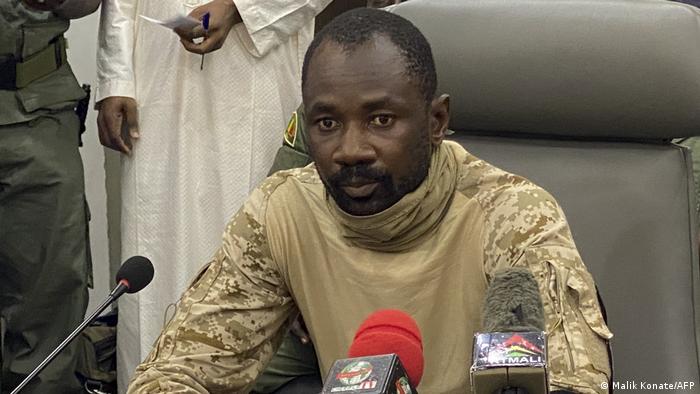 Mali: A coup within a coup, ECOWAS sanctions

The Malian military led by interim vice-president Assimi Goita disempowered interim president Bah N'Daw. At the time, he headed the interim government that had been installed in the wake of the August 2020 coup to prepare for new elections. In Mali, this in a sense, is a "coup within a coup."

ECOWAS reacted decisively, imposing sanctions on members of Mali's junta. It closed its borders with the country, froze its assets at the Central Bank of West African States and imposed a trade embargo on Mali.

But the sanctions affected only a few protagonists of the coup, who also have many ways to circumvent them, according to observers. 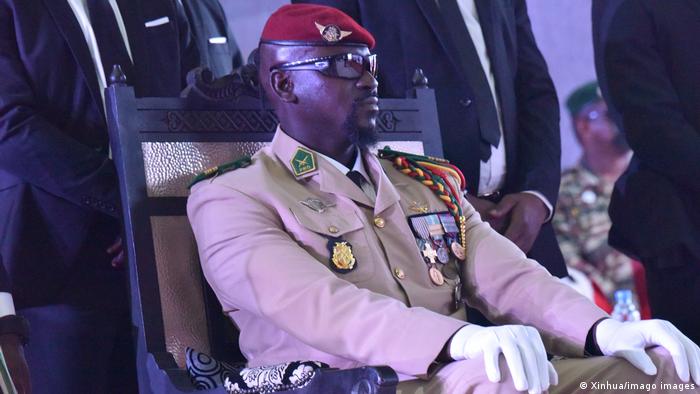 Guinea: Putschists with an own agenda

An elite military unit led by Mamady Doumbouya grabbed power. It declared the government of the octogenarian President Alpha Conde dissolved and the constitution suspended. Conde had drawn fierce opposition after pushing through a new constitution in 2020 that allowed him to run for a third presidential term.

Once again, ECOWAS immediately condemned the coup: Guinea must quickly return to "constitutional order," power must be handed over to a civilian government — within six weeks — otherwise sanctions would be imposed on the country and its new leaders.

But the new rulers didn't take the ECOWAS threats seriously and let the six-week deadline lapse. It wasn't not until May 1, 2022 — eight months after the coup — that junta leader Doumbouya held out the prospect of to constitutional order for Guinea, but only "after a 39-month transition period." Once more, it becomes clear that the authority of the West African bloc is practically non-existent. The possibilities to enforce its demands are limited.

Leading junta members have since been sanctioned and banned from traveling within the bloc. But these sanctions are easy for the coup plotters to get over and circumvent, according to observers. 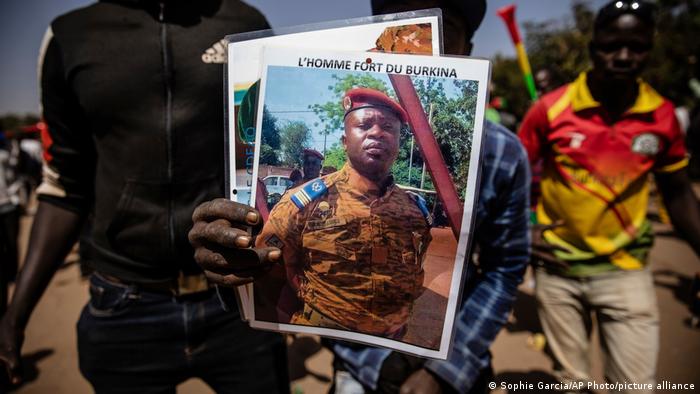 Burkina Faso: No sanctions for putschists

The new rulers immediately pledged "an early return to democracy". But that's not how it turned out: The military should remain in office for a transitional period of three years, the junta said only a few weeks later. The argument: The bloody uprising by jihadis must first be dealt with.

On this occasion, ECOWAS remained inactive and – unlike with Mali and Guinea – did not impose sanctions on the coup plotters in Burkina Faso. 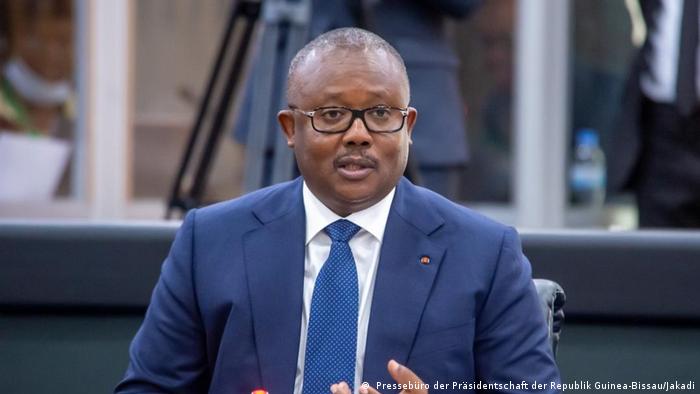 Guinea-Bissau: ECOWAS troops for the president?

Armed soldiers stormed a government building where the increasingly autocratic president, Umaro Sissoco Embalo, held a government meeting. In battles between the presidential guard and attackers, 11 people were killed.

The reaction of ECOWAS in this case was quite different. On mainly the initiative of Guinea-Bissau's large neighbor Senegal, the bloc decided to send a stabilization contingent of an initial 631 soldiers.

"A special case. A special measure by ECOWAS for a small Portuguese-speaking country located between Senegal and the Republic of Guinea," Fode Mane, a lawyer in Guinea-Bissau, told DW.

Mane stressed that there was as yet no official information from ECOWAS on the exact purpose of this military mission. Unofficially, it is said that the soldiers — mainly from Senegal and Nigeria — are to protect elected members of the government. Senior officials, state buildings and infrastructure are also to be guarded.

Guinea-Bissau already had an ECOWAS stabilization force in the country between 2012 and 2020. Its deployment was decided after a bloody military coup in April 2012.

In the case of other coup states, sanctions remain the economic community's sharpest sword.

Many people who are skeptical about the mission are curious about its differences in approach.

"We from the Bissau-Guinean civil society do not have a good feeling about this mission," said Mane. "No one here believes that this stabilization force will solve our problems."

Fode Mane noted that ECOWAS is highly discredited throughout West Africa, not least because of its lax treatment of the coup plotters in Mali, Burkina Faso and Guinea. He said that no one could understand why the bloc kept applying double standards with regard to individual countries.

That sentiment was echoed by Oulata Gaho, a former colonel in the Ivorian army.

"Since ECOWAS is composed of a majority of Francophone states, the leaders of these countries, which used to be French colonies, give the impression that the Elysee Palace is telling ECOWAS how to solve the region's problems," Gaho told DW.

Gaho's conclusion was that ECOWAS' reputation has declined dramatically in recent years.

"Many people in West Africa have come to believe that in recent times, once they are in power, their leaders completely disengage from them and, together with ECOWAS, row against the interests of their peoples."

That, he said, must change.

This piece was translated from German by Benita van Eyssen

Mining is a key driver of economic growth in Guinea. But the military junta's unyielding approach toward a major iron ore project could be doing the country more harm than good.