Following a military coup a month ago, Burkina Faso's junta has approved a charter allowing a military-led transition. Under the plan, the West African nation is to hold elections in three years. 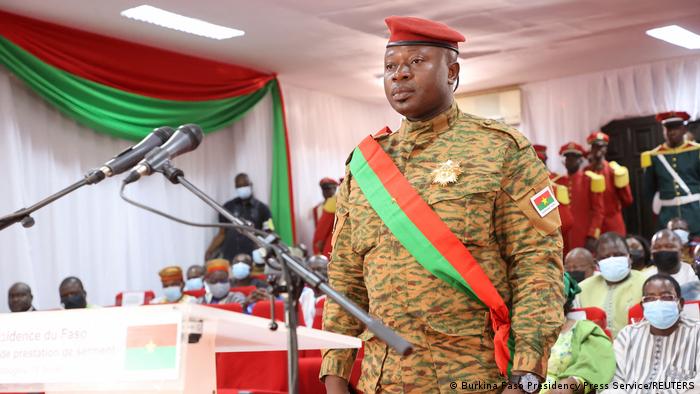 Burkina Faso on Tuesday adopted a charter which set a three-year transition period before the country heads to elections.

The charter was signed by military junta leader Lieutenant Colonel Paul-Henri Sandaogo Damiba, who led a coup to overthrow the elected government just over a month ago. He replaced former president Roch Marc Christian Kabore as the country's leader on January 24.

What does the charter say?

The charter also stated that Damiba, the transitional president, will not be eligible "for the presidential, legislative and municipal elections which will be organized to put an end to the transition."

The other 25 members of the transitional government will also not be able to run for office.

One of the main goals of the transitional government will be to "fight against terrorism, restore the integrity of the national territory," the document said.

"It is true that not everyone is going to be happy with the transitional charter ... but it was the consensus that we reached," said Eddie Komboigo, the leader of an opposition party.

Burkina Faso's coup was the fourth in the West Africa region in 18 months, including two in Mali, and an attempted coup in Guinea Bissau in early February.

Burkina Faso was subsequently suspended from the Economic Community of West African States and the African Union. The US halted nearly $160 million (€143 million) in aid due to the coup.

The country faces constant attacks by armed militants linked to al-Qaida and so-called "Islamic State." Thousands have lost their lives and hundreds of thousands have been displaced in the West African Sahel region, contributing to political instability.

France's armed forces say 40 militants have been killed during an operation in Burkina Faso. The targeted group is believed to be responsible for deadly attacks in Benin.

Russia has recently set its sights on the African continent, signing various political and military deals. Moscow's renewed interest has been linked to the latest spate of coups as it seeks to gain a foothold.

Ex-leader Blaise Compaore is on trial for the 1987 murder of Thomas Sankara, a revered revolutionary leader. Sankara's death coincided with a coup that installed Campaore in power for 27 years.