Should the EU constitution manage to win approval in France, it faces as big a battle in a Netherlands referendum just a few days later. But officials aren't worrying -- yet. 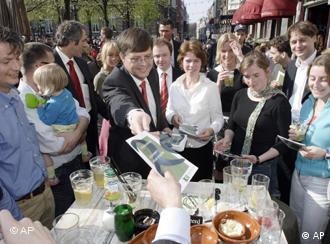 The Dutch prime minister (c.) campaigns for the constitution

In the coming weeks, the fate of the European Constitution will rest in the hands of the Netherlands and France, two nations that are at the moment extremely dissatisfied with the way their countries are being run.

That's not good news for the government politicians who have been alternately coddling and bullying their voters in the past few weeks into approving the document that aims to streamline and simplify the European Union, readying it for the challenges ahead.

"I do not want to speculate about what will happen if the 'no' wins," said Dutch Prime Minister Jan Peter Balkenende, in an interview with the daily De Volkskrant. "I am putting my money on the 'yes' vote. I am optimistic." 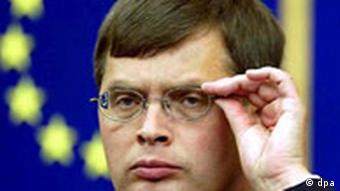 Polls suggest that the "yes" camp is trailing in both France and ther Netherlands. In France, which votes on May 29, 53 percent of those who intend to vote will vote against the treaty. Only 47 percent approve of it. In the Netherlands, the numbers are 54 percent against the treaty and only 27 percent in favor of it ahead of the June 1 referendum. Observers say a "no" vote in France would stop the constitution dead in its tracks.

As in France, where opposition to the treaty has fed off the government's unpopularity, as well as anxiety over the EU's expansion to the east and south, the Dutch debate has been swayed by fears and concerns unrelated to the text.

More than half of Dutch "no" camp supporters said they wished to block Turkey's EU bid, while a quarter wanted to defy Balkenende's government. The Dutch referendum is non-binding, but the main political parties have said they will take it into account when the text comes up for parliamentary approval if turnout exceeds 30 percent -- even though, according to the prime minister, 85 percent of lawmakers support the constitution.

Balkenende hit out at the "no" camp for failing to suggest an alternative to the treaty, which aims to simplify decision-making in the 25-member EU, saying: "I have not heard anyone explain what should be renegotiated."

"A no to Europe" from France

A war of words is erupting in France as well in the final week before the vote. Former Socialist Prime Minister Lionel Jospin, whose two prior campaign appearances earned high marks, urged his skeptical party faithful late Thursday to join the "yes" camp, picking apart the arguments of treaty opponents. 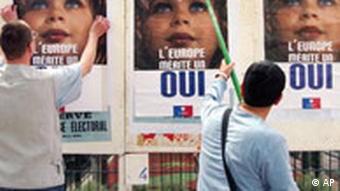 Could the "yes" vote pull it off in the final week?

"To those who are tempted to vote no, I say that they have every chance of being deceived," Jospin told 3,000 Socialist Party (PS) supporters at a rally in the western city of Nantes, warning against a protest vote to punish Chirac.

"If the French vote no, there will be no change in France, but just a no to Europe," the former prime minister cautioned. Pollsters agree that left-leaning voters hold the key to the results on May 29. Jospin and the PS leadership are campaigning for the constitution, while former prime minister Laurent Fabius leads the left's "no" camp.

Former Communist party leader Robert Hue hit back at Jospin on Friday, condemning his "arrogance" and the "constant stream of chatter from the yes camp."

The "no" camp has gained ground on talk of a possible "plan B" should the treaty be rejected -- meaning its eventual renegotiation. The BVA survey showed that 69 percent of French people believe the charter can be rewritten.

Chirac, along with EU officials and other leaders, has repeatedly ruled out any renegotiation, a message hammered home on Thursday during a summit with German Chancellor Gerhard Schroeder and Polish President Aleksander Kwasniewski in eastern France.

The constitution, which aims to simplify the operating rules of the European Union following expansion to the post-communist east, must be ratified by all 25 member states. So far, seven have done so.

With the creation of a president, foreign minister and new powers centralized in Brussels, the EU Constitution proposes the biggest reform in the history of the European Union. (Oct. 29, 2004)

A poll published in France on Friday showed that 51 percent of French voters could vote "no" in a referendum on the European constitution. A rejection by the French could kill the treaty. (March 19, 2005)

German parliamentarians overwhelmingly approved the EU constitution on Thursday. While the treaty has been at the center of impassioned public debate in France, it has failed to ignite similar interest in Germany. (May 5, 2005)