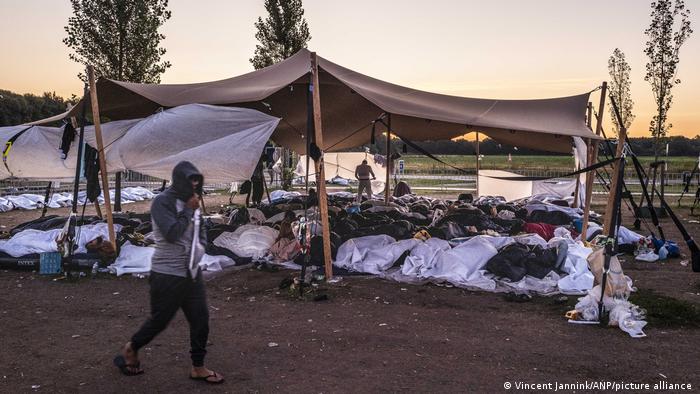 "Stress, insomnia and anger. That's what I've been experiencing over the past few days," said Saleh (name changed) a displaced person from Yemen, who is keen to seek asylum in the Netherlands.

Seated on a torn mattress on a muddy footpath outside the Ter Apel asylum center in the northern province of Groningen, the Netherlands' largest and main asylum reception center, he described how the inhumane conditions there had also left him feeling suicidal.

"I fled horrible living conditions in Yemen in July this year hoping to live a better life in Europe. I reached the Netherlands in early August and continue to live in a harsh manner. I have been sleeping outside with the mosquitoes for more than three weeks since the Ter Apel center is overcrowded. They won't even let me register for asylum and all this waiting and uncertainty has left me feeling like killing myself," he told DW.

Located in the lush green village of Ter Apel, this center can house up to 2,000 people and is also the place where refugees have to declare their arrival in order to begin their asylum application process.

But over the past few weeks, bureaucracy in asylum procedures and overcrowding at the center led to more than 700 people camping outside. A 3-month-old baby also died at the center last week.

While investigations around the cause of the baby's death are still ongoing, Nicole van Batenburg, press officer at Red Cross Netherlands, told DW that the health conditions in the center have been terrible for months.

"We've seen a lot of health hazards. Many people get blisters, foot problems and skin issues because they can't shower and have been sleeping in rough conditions outside. Some have also had heart and respiratory problems and we've been working together with Doctors Without Borders who have also set up their base here for the first time, to help people," she said.

Dutch Prime Minister Mark Rutte has said he was "ashamed," and announced several measures over the weekend to try and get the situation under control. So far, more than several hundred people have been evacuated by bus to other asylum shelters around the country, to ensure that nobody had to sleep outside. 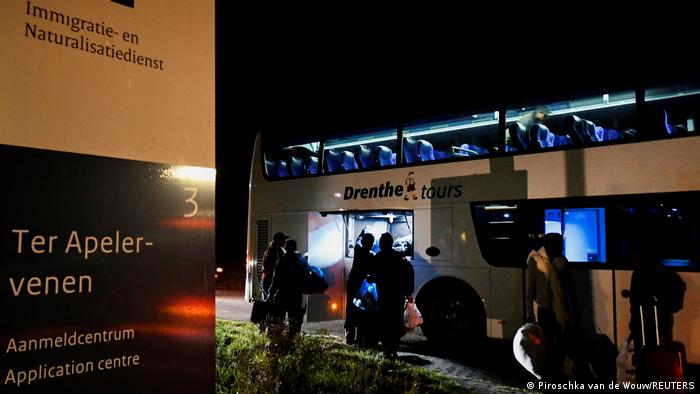 Yet some like Saleh have refused to leave, fearing they would lose their turn of registering their asylum claims at the main Ter Apel center. "I need to get my asylum papers and will continue waiting for however long it takes," he said.

According to Milo Schoenmaker, chairman of the board of the Central Agency for the Reception of Asylum Seekers, there are currently 16,000 people inside the center. He said in a statement that the Dutch cabinet was now focusing on transferring the 16,000 people who live in the center and already hold asylum status.

"This offers them perspective and creates space for new people who need asylum reception," he said.

But Yahia Mane, a refugee from Sierra Leone, thinks this is a false claim.

"They are lying about no place inside the center. There are rooms still empty. I saw that when I was inside with my family. They just don't want to admit more people. That makes them criminals," he said.

"I lived inside with my wife and two kids for three weeks after registering, but it was horrible. We didn't even get proper food. They now want to transfer me to another prison-like asylum center and separate me from my family, and make place for new arrivals. I didn't expect this from the Netherlands. I came here hoping I would have a safe roof for my family," he told DW.

'Clearly a violation of human rights'

Sophia In't Veld, a Dutch member of the European Parliament and politician from the liberal D66 party, told DW that the asylum reception crisis is mainly a political problem.

"Being one of the richest countries in the world, I find it absolutely shameful that the political system of our country has resulted in people living in such conditions. The current government has mismanaged migration over the past few years with some political parties in the country wanting to stop immigration. They want no more asylum-seekers, which I think is an illusion," she said.

She was also critical of the government's solution of tackling the Ter Apel reception crisis by limiting family reunification visas and restricting migrant arrivals agreed under a 2016 European Union deal with Turkey.

"This is clearly a violation of human rights and also EU law. I particularly find the family reunification restriction disturbing because that means people can be cut off from their children, their parents and relatives for a long period of time," she said.

The Dutch government has set a September 10 deadline to have all refugees living in proper shelters and also instructed the Dutch army to build a second asylum reception center. 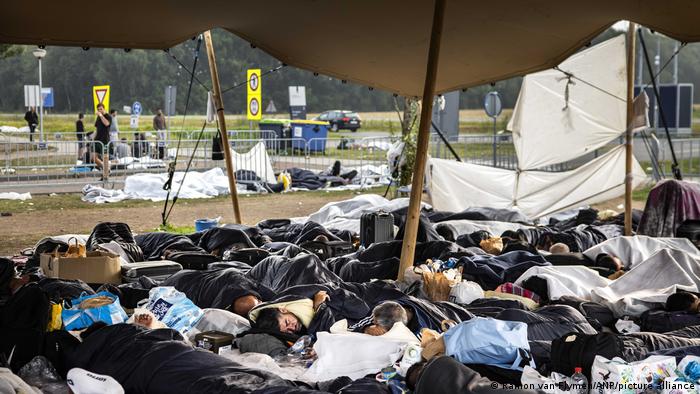 But Bram Frouws, director of the Mixed Migration Center, said the problem is also linked to a huge housing crisis brewing in the Netherlands.

"There just aren't enough houses in the country, which affects the availability of houses for asylum-seekers. So this means they will continue living in asylum reception centers across the country for months. In turn, the asylum centers have no capacity to receive new arrivals and people have to sleep outside," he told DW.

Rising house prices and property investors manipulating the housing market are some of the main reasons behind the lack of housing facilities, according to a study commissioned by the Interior Ministry.

Frouws lists a number of other issues that have exacerbated the problem.

"Shortage of laborers means there aren't enough people to construct new homes. A nitrogen emission crisis is stalling the process of building houses. And farmers are being told by the far right that the Dutch elite who support immigration will encroach farmlands to build new homes for migrants. So in the end, it is the asylum-seekers who bear the brunt," he said.

Pathway ahead with EU help

The European Union Agency for Asylum has already stepped in to support the Dutch authorities in increasing capacity at asylum centers . According to a spokesperson for the European Commission , the operational plan was signed between the agency and Dutch authorities on May 6.

"The plan, with one year validity, aims to extend reception and accommodation capacities for asylum-seekers and displaced people, deploying seven European Union Agency for Asylum staff on the ground and providing 160 containers. As of August 23, the first reception officer from the European Union Agency for Asylum has been deployed to Ter Apel," the spokesperson told DW.

Yet Frouws thinks the EU should also critically assess the Dutch asylum policy, including the government's newly proposed ideas on family reunification.

"The government's plan to handle this crisis by reducing family reunification arrivals in order to avoid congestion at Ter Apel should be avoided. So far, these people arrive on family reunification visas and also need to register at Ter Apel. There is no need for that since they have already been vetted. This isn't a solution to stop overcrowding," he said.

Cities like Velsen-North and Amsterdam have already been proactive. According to local media reports, both have approved an agreement with the central government to house at least 1,000 refugees on a cruise ship anchored in their ports for at least six months.

For Saleh, who still remains in limbo on the streets of Ter Apel, such solutions give him hope.

"I know the Dutch people are amazing and will find solutions. But the bureaucracy of the migration system is what is really affecting us right now. I hope I get my papers soon so I can live and work in any place here to give back to this country," he said.