European leaders say they've reached an agreement in principle for Turkey to take back irregular migrants who arrive in Greece. German Chancellor Angela Merkel has called it 'a breakthrough if implemented.' 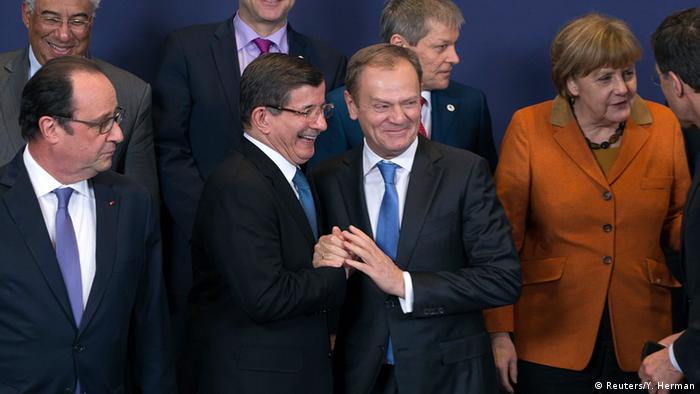 In a press conference held in the early hours of Tuesday following a lengthy Brussels summit, European Commission President Jean-Claude Juncker announced the outline of an agreement which it was hoped would solve Europe's migration crisis.

"By doing what we are intending to do, we will break the business model of smugglers exploiting human misery and make clear that the only viable way to come to Europe is through legal channels. There will be no longer an incentive for Syrians to pay criminals to smuggle them across the Aegean. Doing so will not only land you back in Turkey but will put you on the bottom of the list for resettlement," Juncker said, explaining that Turkey would take back all irregular migrants who arrived in Greece, including Syrians.

"For every Syrian readmitted, one will be resettled to the European Union directly from Turkey," Juncker remarked.

Turkish Prime Minister Ahmet Davutoglu stunned his 28 EU counterparts on Monday when he asked for an extra three billion euros ($3.3 billion) in aid and acceleration towards visa-free travel for Turks to the bloc, in return for taking back migrants and the one-for-one Syrian refugee exchange. Also on the table was a revival of the stalled process of Turkey joining the EU.

After EU leaders "warmly welcomed" Turkey's proposals, EU president Donald Tusk, who had toured Turkey, Greece and the Balkans in the lead-up to the summit, said he would now work on the legal details to reach a final deal at a meeting to be held March 17-18.

"We all of us are aware that in fact we have a breakthrough now," he said.

"It is a breakthrough if it becomes reality."

Well over a million people fleeing war or poverty in the Middle East and further afield have journeyed to the EU in the past year, most of them making the dangerous sea crossing from Turkey to Greece, and then heading by foot through the Balkans towards Germany. The unprecedented influx has put a strain on Europe, both in terms of its humanitarian response and politically, effectively leading to the suspension of its Schengen free travel zone.

Germany has condemned the deterioration of press freedom in Turkey after authorities took control of a top opposition paper. But for many such condemnations ring hollow. (07.03.2016)