As drones become smarter, they could be harnessed by terrorists to carry out deadly attacks, the EU commissioner has warned. One scenario involves the aircraft spreading biological agents over a football stadium. 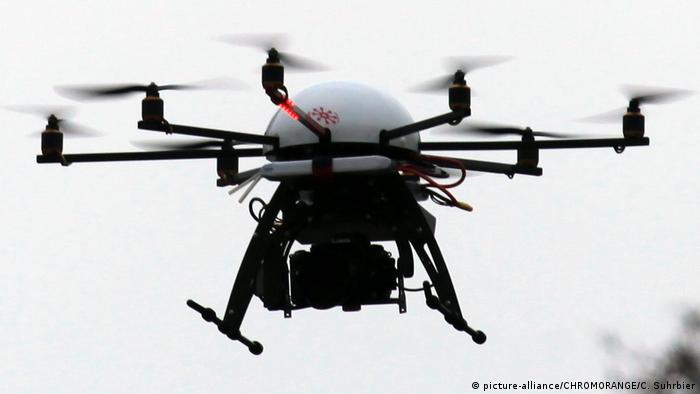 The European Commission on Saturday warned about the potential use of drones to carry out terrorist attacks.

In an interview with the German newspaper Welt am Sonntag, which was published online on Saturday, EU Security Commissioner Julian King said the technology could be deployed by those seeking to attack European cities and citizens.

"Drones are becoming ever more powerful and smarter, which makes them increasingly attractive for legitimate use, but also for hostile acts," he said.

As the technology advances, King said it was vital for authorities to "monitor the threat both as it appears today and how it will look in the future."

Welt cited a scenario outlined by France's counterterrorism agency in which unmanned drones carrying biological agents may drop their payload over football stadiums.

Citing informed sources, the newspaper said France's coordination unit for the fight against terrorism (UCLAT) had issued a secret report last December to the European Parliament's special committee on terrorism warning of such a possibility.

King said the Commission is supportive of efforts by EU states "to build networks for sharing information, increasing international engagement, and to provide funding for projects to counter the threat of drones."

Drone technology has been harnessed for military purposes since the 1960s and has played a key role in conflicts ever since the 1991 Gulf War. The United States and Israel dominate the market for military unmanned aircraft. China, meanwhile, is the world's No. 1 producer of civilian drones.

In the wrong hands

The Lebanese militant group Hezbollah is reported to have the most advanced drone technology of any non-state actor. The Iran-backed Houthi rebels have also used drones to target Saudi air defenses in Yemen's civil war.

Drones are increasingly used for criminal activities. Organized crime gangs have deployed the technology to smuggle drugs, cigarettes and other high-value goods across borders and even into prisons.

Other malicious use of rogue drones included the 30-hour disruption to flights at Britain's Gatwick Airport in December 2018.

In February, Germany's armed forces, the Bundeswehr, carried out tests on technology to counteract intrusive drones to prevent a similar incident happening at a German airport.

The increased threat from drones has prompted several companies to invent technologies that can force the aircraft out of the sky. They include hand-held weapons, drones fitted with nets to catch offending vehicles, and electronic fences that jam drone signals.

Germany should have a weekly protest against right-wing extremism similar to "Fridays for Future," Foreign Minister Heiko Maas has said. He claimed that far too often, Germans turn a blind eye to right-wing terrorism. (22.06.2019)

US officials say they have intelligence suggesting the son of al-Qaida founder Osama bin Laden has died. Hamza bin Laden, sometimes called the "crown prince of jihad," was seen as the heir to the al-Qaida leadership. (01.08.2019)