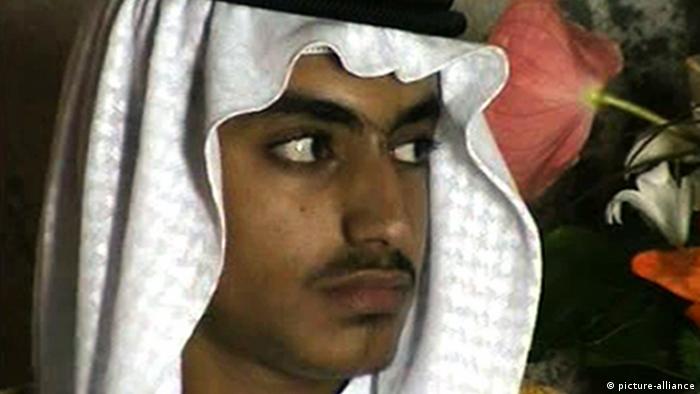 Hamza bin Laden, the son of slain al-Qaida leader Osama bin Laden, has died, according to unnamed United States officials cited by US media on Wednesday.

The younger bin Laden had been on a US terror blacklist since 2017. In February, the US government put a $1 million (€902,830) bounty on his head, saying he was "emerging as a leader in the al-Qaida franchise."

Reports of his death were first carried by NBC News and The New York Times. US President Donald Trump later declined to confirm or deny the reports, saying only: "I don't want to comment on it."

It was not clear where or when Hamza died. But the Times reported the US played a role in the operation, and that it took place in the past two years. That account has not been verified.

Groomed to be al-Qaida heir

Hamza, believed to be about 30 years old, was the 15th of Osama bin Laden's 20 children. He was with his father in Afghanistan before the terror attacks against the US on September 11, 2001, according to the Brookings Institution. He also reportedly spent time with him in Pakistan after the US-led invasion of Afghanistan forced top al-Qaida members to regroup over the border.

US forces killed Osama bin Laden at his compound in the Pakistani city of Abbottabad in May 2011. Al-Qaida has since been led by his Egyptian former deputy, Ayman al-Zawahiri.

Documents found at the site of the raid in Pakistan showed that Hamza was being primed to eventually take over as head of al-Qaida, according to the US State Department. The group was behind the 9/11 terrorist attacks and its affiliates have since made inroads in Syria, Afghanistan and Yemen.

Hamza's whereabouts have been unknown for some time. He was believed to be under house arrest in Iran, but reports suggest he may have resided in several other countries in the region.

Since his father's death, Hamza has released audio and video messages calling for attacks on Western countries and threatening to take revenge against the US.

After years of delay, German authorities deported a 42-year-old Tunisian man believed to be an al Qaeda-trained bodyguard who once protected Osama Bin Laden. A last-minute court order to halt the move arrived too late. (13.07.2018)

US authorities have sentenced Haroon Aswat, former aide to the preacher Abu Hamza, to 20 years in prison for trying to set up an al Qaeda camp in Oregon. Aswat is receiving treatment for paranoid schizophrenia. (17.10.2015)