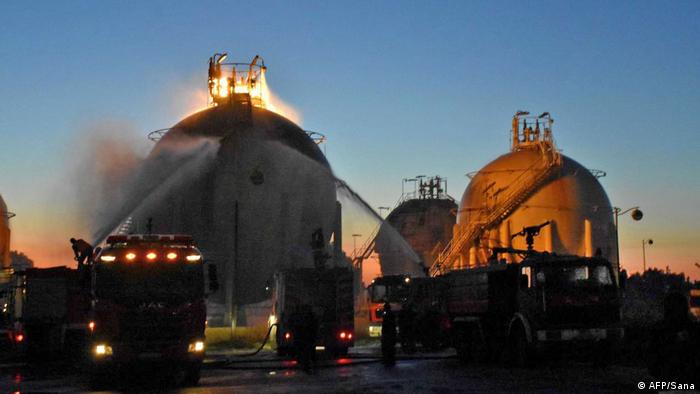 The ministry said that firefighters were trying to control the fire and were undertaking repair work at the facilities.

No group has so far claimed responsibility.

The city of Homs and the surrounding areas have been under control of the Syrian government since 2017, however rebels are active in some parts of the province near the border with Jordan.

Read more: IS declares new leader after death of al-Baghdadi

On Friday, "Islamic State" (IS) militants seized a gas field in rural Homs after launching an attack on Syrian government forces in the area.

Syria is facing severe fuel shortages amid Western sanctions and the Kurdish-led fighters' control of most of the country's oil fields.

Before the start of the Syrian conflict in 2011, the Middle Eastern country exported around half of the 350,000 barrels of oil it produced per day. Production now has plummeted to around 24,000 barrels a day, covering only a fraction of domestic needs.

Read more: Is the Syria conflict an economic war?

Meanwhile, tens of thousands of civilians have been displaced in recent weeks due to heavy airstrikes in the province of Idlib in northwestern Syria, the United Nations said on Friday.

Up to 60,000 people have fled the region, news agency DPA reported citing a spokesperson with the UN humanitarian agency OCHA.

The area, which is one of the last opposition strongholds in Syria, has been the target of intensified airstrikes carried out by the Syrian army and Russian forces.