Around 2,000 people turned out to call for tolerance in Dresden, as up to 8,000 far-right PEGIDA supporters took to the streets. Meanwhile, several anti-immigrant and anti-Muslim groups have staged demos across Europe. 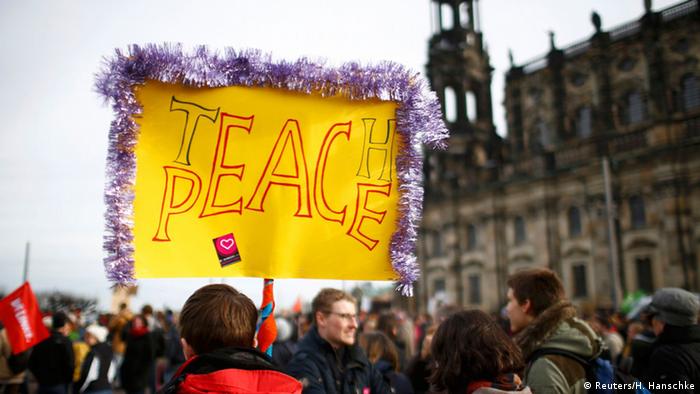 The German state of Saxony's deputy premier was among those who marched through the eastern German city calling for tolerance on Saturday, in defiance of the anti-immigration movement that held a larger demonstration on the other side of the Elbe River.

"We will not let it be known that Dresden believes in incitement; we are here because we want to show Dresden's true heart," Martin Dulig told the "Solidarity without limits" group.

Appealing for their protest to send out a clear anti-xenophobic message, Dulig added, "We are the majority, and we must always say and show that."

Earlier, a Protestant service at the Dresden Synagogue also sought to counter the events of the so-called European Action Day by PEGIDA, which had hoped to hold protests in 14 countries.

It was the first time a Protestant service was permitted in the Jewish place of worship.

"It is our duty to be open towards refugees and foreigners," Nora Goldenbogen, the chair of the local Jewish community group, told the EPD news agency after the service.

Followers of the group Patriotic Europeans Against the Islamization of the West (PEGIDA) began their much larger rally shortly afterwards.

Their supporters held placards calling for German Chancellor Angela Merkel to step down, while the Anti-PEGIDA group waved banners with the words "No place for Nazis" during their rally.

"Independent of the EU and the usual elitist circles, we will develop the network of patriots in Europe - to Fortress Europe," PEGIDA leader Tatjana Festerling said in Dresden, which she described as the "capital of German resistance." The right-wing, anti-Islam, anti-immigration PEGIDA group started in the eastern German city in October 2014.

Police said they were prepared in case violence broke out between the two groups, after similar protests turned ugly recently. Ahead of the march, PEGIDA organizers had said they hoped some 20,000 people would attend their march. Estimates of the actual number of demonstrators put the number at between 6,000 and 8,000.

The anti-immigration movement has been buoyed by rising fears as hundreds of thousands of migrants have entered Europe over the past year.

In particular, many Germans are skeptical about whether the country can integrate so many newcomers at once.

Events like the sexual assaults that took place in Cologne on New Year's Eve have helped fuel concerns. The perpetrators of those attacks were described as North African.

But amid rising hate speech by leaders of the far-right movement, there is a growing chorus of voices calling for those encouraging violence against foreigners or politicians to be prosecuted. 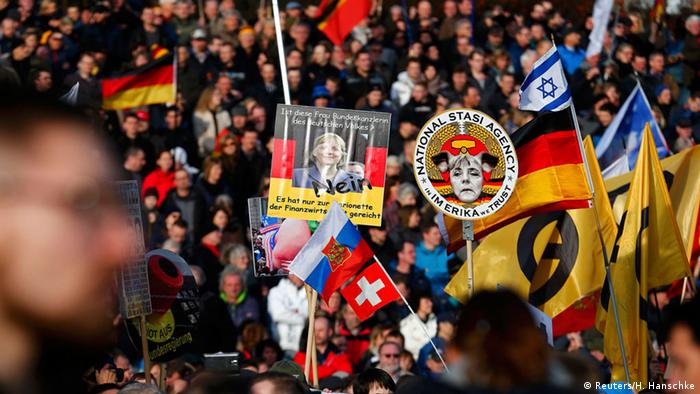 Fewer supporters than PEGIDA expected showed up in Dresden

Skirmishes at other protests

Meanwhile in the Netherlands on Saturday, riot police clashed with protesters as PEGIDA supporters attempted to hold their first protest in Amsterdam.

Around 200 PEGIDA supporters were outnumbered by police and left-wing demonstrators. Several people were arrested.

Similar scenes took place in the French port city of Calais, close to where thousands of migrants lived in makeshift camps in an attempt to reach the UK.

The AFP news agency reported that around 150 protesters gathered in the center of the town, carrying signs such as "This is our home," waving the French flag and singing the French national anthem.

Police issued warnings for the demonstration to disperse and then fired tear gas to break it up, arresting around 10 people, an AFP correspondent said.

In the Czech capital, Prague, some 1,500 PEGIDA supporters waved banners with the words "No immigration - Stop the Merkelization."

After two counter-demonstrations of about 400 people arrived, police reportedly fired into the air to separate the two groups.

A PEGIDA-style protest in the British city of Birmingham attracted 150 supporters and 60 counter-demonstrators as support for the movement spreads across Europe.

In Ireland, scuffles broke out in Dublin between people who had gathered to protest against the launch of Pegida and people attending the launch of the group on Saturday. "We are standing together... to show that there is no place in Ireland today for racism and Islamaphobia - there is no place for hate," counter demonstrator and MEP Lynn Boylan from the Sinn Fein party said.