Cars blaze in Dresden as PEGIDA demonstrates nearby

Thousands of PEGIDA demonstrators have once again protested in the eastern German city of Dresden. Local media have reported that 10 cars, thought to belong to PEGIDA supporters, were set alight. 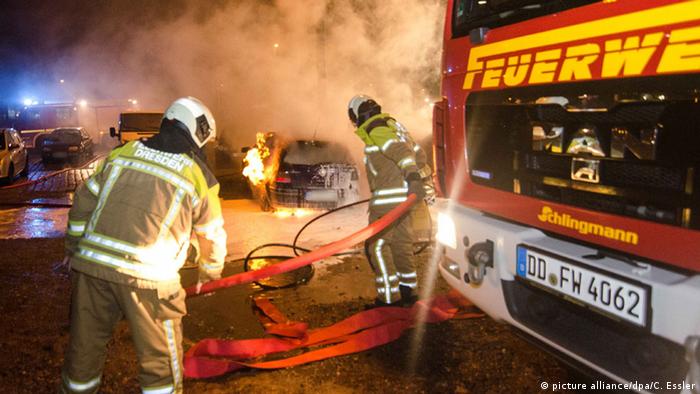 Dresden police reported late on Monday that 10 cars had been set alight during the protest. The vehicles were in a parking lot under the city's Marienbrücke bridge where many PEGIDA supporters usually leave their cars while attending the weekly demonstration.

It was not immediately clear if members of the anti-PEGIDA movement were responsible for fires.

According to student initiative "Durchgezählt," between 250 and 350 people turned out to demonstrate against the xenophobic movement on Monday. Counter-demonstrators attacked some of the PEGIDA members with smoke bombs, but the situation was quickly brought under control by police.

Taking to the stage on Theaterplatz, in front of Dresden's Semperoper, PEGIDA frontperson Tatjana Festerling was met with a sea of banners held by 3,000-4,000 PEGIDA supporters, many sharing common slogans such as "Merkel must go!" and "Resistance!"

In light of a conference held by the "Patriots of Europe" in Prague last weekend, Festerling praised the movement's "internationality."

PEGIDA supporters from 14 different countries gathered in the Czech capital on Saturday under the slogan "Fortress of Europe," where they declared their "holy right" as Europeans to defend themselves.

The offices of the district attorneys in both Dresden and the nearby city of Leipzig are currently investigating Festerling on suspicion of sedition.

Speaking as a guest at Monday's rally, a Danish PEGIDA supporter named Tanja described Europe's unprecedented influx of refugees as a "tsunami of mostly well-fed migrants, full of greed for our countries, our prosperity and our women."

PEGIDA founder Lutz Bachmann confirmed that the movement's usual weekly protest wouldn't take place next week. Instead, the group plans to hold a Europe-wide demonstration on February 6, with protesters due to meet in a host of European cities including Warsaw, Tallinn, Prague, Bratislava, Amsterdam and Birmingham.

Anti-Semitism is "unfortunately too often" evident in society, Chancellor Angela Merkel has said in her weekly video podcast. Germany still has a "big task," she says, to resist hate speech and uphold its constitution. (24.01.2016)