Dozens of migrants drown after boat sinks off Tunisian coast

At least 35 people have drowned after a migrant boat sank off the coast of Tunisia. The country has become the preferred jumping off point for desperate migrants after Libyan forces tightened security. 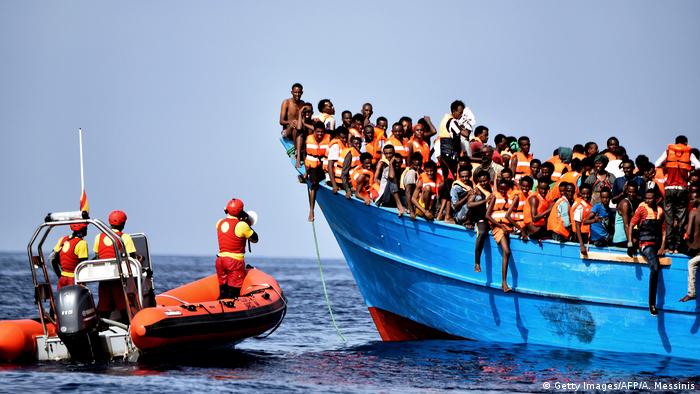 The bodies of 35 migrants were recovered off the coast of Tunisia Sunday, raising the death toll put out earlier by the Defense Ministry.

A distress signal was sent out at 10:45 p.m. Saturday night from "a fishing boat about to sink" with migrants on board, according to the Interior Ministry.

Tunisians and seven foreigners were among the survivors, which included nationals from Ivory Coast, Mali, Morocco, and Cameroon, according to Bouhoula.

"The coastguard and the navy continue their search with the support of a military plane," the Interior Ministry said in a statement.

"Units of the Sfax Marine Guard and the Navy went to the boat which was five nautical miles (9 kilometers) from Kerkennah Island and 16 nautical miles from the city of Sfax," the ministry added.

Security officials said there were about 180 migrants packed onto the boat, including 80 from other African countries.

Tunisians and other migrants frequently try to cross the Mediterranean in search of a better life in Europe, although departures peaked last September.

The surge is a reflection of frustration among young people struggling to find work.

Tunisia has become the preferred launching point for migrants heading to Europe, after Libya's coast guard, with the aid of armed groups, tightened controls in Libya.

Unemployed Tunisians and other Africans often depart in makeshift boats bound for Sicily.

In October, a migrant boat collided with a Tunisian military vessel. At least 44 people were killed in what Prime Minister Youssef Chahed called a "national disaster."