The military is now assisting local law enforcement agencies in the hardest-hit provinces of Gauteng and KwaZulu-Natal, but rioting and looting continue.

The death toll during the unrest in South Africa has increased to 72, officials reported on Tuesday.

People initially took to the streets to protest the imprisonment of former President Jacob Zuma last week. Since then, the protests have rapidly escalated into looting and riots.

Many people are frustrated by inequality and poverty in the country, which have been exacerbated because of severe restrictions aimed at blocking the spread of COVID-19.

Where have people died in the South Africa protests?

According to state and provincial authorities, the death toll includes 19 deaths in Gauteng and 26 in KwaZulu-Natal. Gauteng includes the cities of Pretoria and Johannesburg, while KwaZulu-Natal in the east is Zuma's home state.

The bodies of 10 people were found on Monday evening after a stampede at a Soweto shopping mall, said Gauteng's premier, David Makhura.

How bad are the riots in South Africa?

In Durban, the provincial capital of KwaZulu-Natal and a major import-export hub, hundreds of looters raided warehouses and supermarkets. 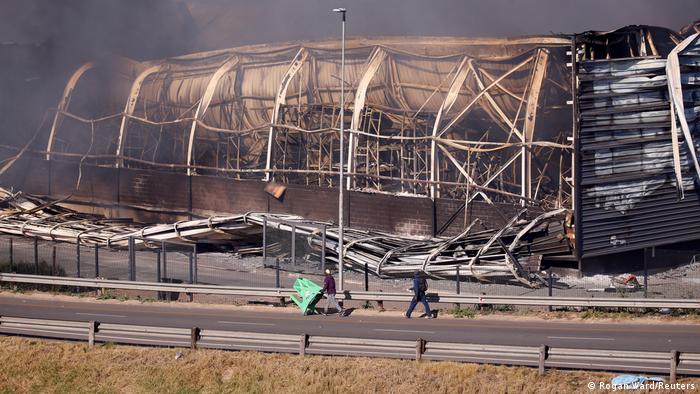 Protesters set fire to Brookside mall in Pietermaritzburg after looting it

The regional government said the protests could cause problems with municipal utility services such as the water supply, as urgently needed repairs could not be carried out.

How have South Africa's lawmakers responded?

Police Minister Cele said 757 people had been arrested so far. He added that the government would act to prevent unrest from spreading further and warned that people would not be allowed "to make a mockery of our democratic state."

The government has stopped short of declaring a national state of emergency, but has deployed troops.

Makhura called for calm in a tweet on Tuesday. "The gains we have made in revitalizing our economy are being reversed by the destruction and shutting down of businesses," he said.

What sparked the unrest in South Africa?

The protests initially started out as support for Zuma, who last week on Wednesday began a 15-month sentence for contempt of court.

He was handed jail time for defying a constitutional court orderto give evidence at an inquiry investigating high-level corruption during his nine years in office until 2018.

The jail sentence marked a significant fall for Zuma, who was a prominent anti-apartheid activist and leader of the liberation-movement-turned ruling party, the African National Congress (ANC). 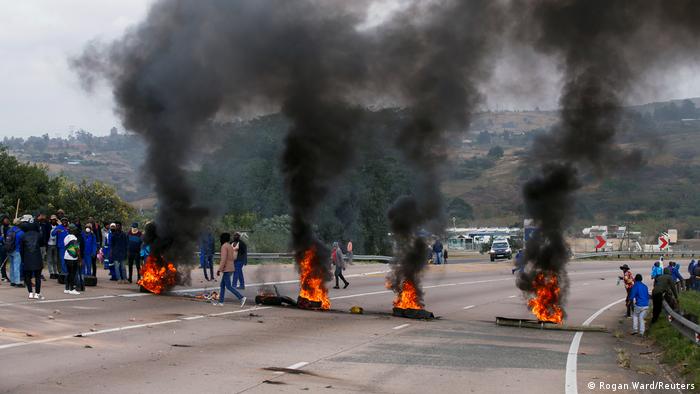 But his core supporters, including many in KwaZuli-Natal, were moved to protest, angered at Zuma's sentence. They claim that he is the victim of politically motivated harassment by allies of his successor and current president, Cyril Ramaphosa.

Dissatisfaction is rife more generally in South Africa, however, not least because of an unemployment rate north of 30% and youth unemployment figures that are higher still.

Johannesburg has been rocked by protests against the imprisonment of former President Jacob Zuma, who was jailed for snubbing anti-corruption investigators. Zuma will seek to annul his prison sentence on Monday.