South Africa's ex-President Jacob Zuma hands himself over to police

The 79-year-old anti-apartheid veteran turned himself in to officers on Thursday in line with a court ruling that says he must serve 15 months in prison for contempt of court.

Jacob Zuma turns himself in

Former South African president Jacob Zuma was in police custody on Thursday after handing himself over to authorities to begin a 15-month prison term.

The veteran leader had faced a midnight deadline for officers to arrest him after judges ruled he should go to jail for contempt of court.

The country's highest court handed Zuma the prison term after he ignored a judicial ruling ordering him to appear before a commission investigating alleged corruption during his time in office from 2009 to 2018.

Zuma had lodged two last-ditch legal appeals, which will be heard in the coming days, meaning it was not clear until late on Wednesday whether he would abide by the deadline to turn himself in. 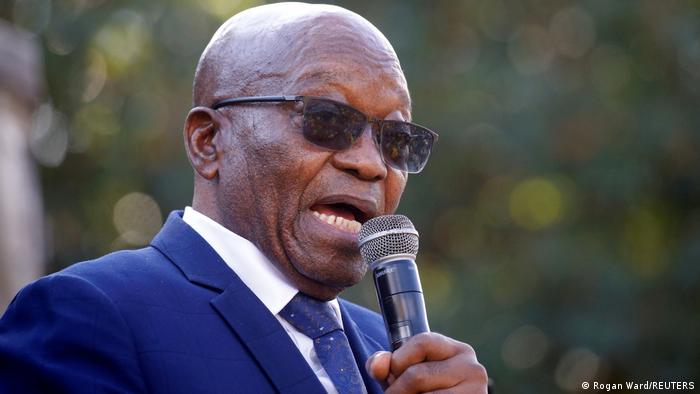 Can Zuma be released on parole?

Zuma "will be afforded dignity throughout his term of incarceration," Ramola said.

"This is not a moment of celebration or triumphalism, it is a moment of restraint and to be human," he said, promising to treat Zuma like any other inmate.

South Africa: 'The walls were closing' in on Jacob Zuma

Why did judges impose a deadline for his arrest?

Supporters had gathered at his home in Nkandla in Kwa-Zulu Natal province in recent days to try and prevent his arrest.

But the 79-year-old decided to turn himself over ahead of the court's deadline, which was imposed after he refused to show up on Sunday.

"President Zuma has decided to comply with the incarceration order. He is on his way to hand himself into a Correctional Services Facility in KZN [KwaZulu-Natal province]," the Zuma Foundation said in a tweet on Wednesday.

Police ministry spokesperson Lirandzu Themba confirmed to the Reuters news agency that Zuma was in the care of the police service, in compliance with the court order.

What did Zuma's legal team argue?

His lawyers had made a last-ditch bid to block his incarceration, saying there would be "a prejudice to his life" if he served the jail term.

It is the first time that a former South African president has served time in prison after leaving office.

The ex-head of state joined the fight against apartheid alongside Nelson Mandela, spending 10 years in the Robben Island jail with the man who became South Africa's first Black president.

A stalwart of the African National Congress, Zuma rose through its ranks to become the party's most influential power broker.

However, his influence was on the wane by 2017 when then-Deputy President Cyril Ramaphosa replaced him as the ruling party’s leader in December of that year.

The commission inquiry was set up to probe allegations that Zuma allowed three Indian-born businesmen, Atul, Ajay, and Rajesh Gupta, to tap into state resources and buy influence over government policy.

The three brothers fled to Dubai after Zuma was ousted by Ramaphosa. All of them deny any wrongdoing.

Prosecutors reinstated the charges in March 2018, one month after his presidency came to an end.

The former president has branded all of the allegations as a politically motivated witch-hunt.