Bayern thrashed an old rival, while Schalke picked up a big first victory for their new coach Roberto di Matteo. But Dortmund's woes in the Bundesliga continued with a 2-1 loss to Cologne. 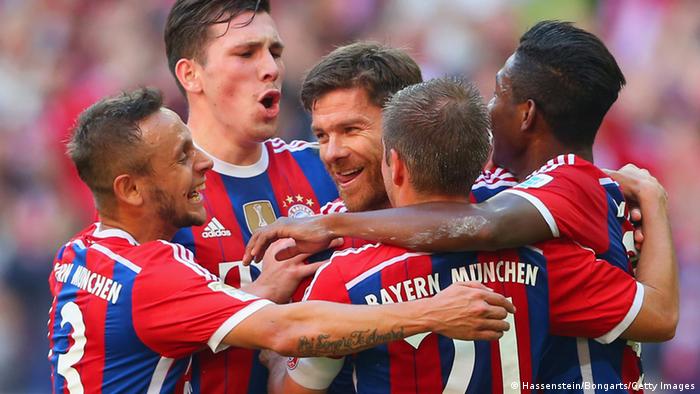 For Borussia Dortmund, the return of Ilkay Gundogan after a 14-month injury to Borussia Dortmund's lineup was a piece of encouragement heading into their away match against Cologne. Perhaps the 23-year-old would provide Jurgen Klopp's side with a kick-start it badly needed after struggling in the Bundesliga so far this season. 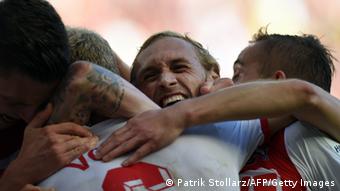 Cologne couldn't believe their luck with their second goal

But before the match even started, an ominous sign set the tone for what would be a rough day for Dortmund. Erik Durm, fresh from two appearances with the German national team, injured himself during warm-ups. Marco Reus was given an unexpected start despite an injury of his own just six weeks ago.

The match was scoreless until the 40th minute when Kevin Vogt put away defensively minded Cologne's first home goal of the season. Just after the restart, Reus earned his keep by setting up Ciro Immobile for a Dortmund equalizer.

It looked like Dortmund would earn a point or maybe three, but an embarrassing blunder handed the game to Cologne. After Dortmund lost possession in their own half, Yuya Osako found Simon Zoller racing toward the goal. Dortmund's keeper, Roman Wiedenfeller, attempted to intercept the pass but ended up missing the ball completely. Zoller couldn't believe his luck as he pushed the decisive goal into a wide open net.

The 2-1 loss to Cologne is Dortmund's third Bundesliga defeat in a row. 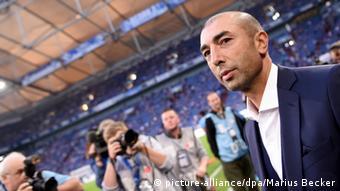 Di Matteo racked up his first three points in Germany

In Saturday's late match, the Roberto di Matteo era in Schalke got off to a successful start. The former Champions League winner as coach of English side Chelsea looked on as the Royal Blues got a 2-0 home win against Hertha Berlin.

Schalke striker Klaas-Jan Huntelaar missed an absolute sitter in minute eight, but the Dutchman made up for his blunder on the twenty minute mark, heading in a delicately weighted Julian Draxler cross.

Hertha had more shots on goal and possession, but Schalke seemed to be channeling di Matteo's Italian roots and his time in Serie A, as they comfortably defended their lead. In minute 65, Draxler gave them a bit of insurance when his deflected shot beat Hertha keeper Thomas Kraft. Berlin never seriously threatened again.

The unspectacular but comfortable 2-0 victory took the Royal Blues, who got off to a tepid start to this Bundesliga season, into the top half of the table.

With a number of Bayern Munich's players returning from international action, and their next Champions League match coming up on Tuesday, an easy 6-0 jaunt against Werder Bremen was just what coach Pep Guardiola wanted.

Captain Philipp Lahm got the walk in the park started in the 20th minute, and Xabi Alonso doubled the lead with his first Bundesliga goal seven minutes later on a very poorly defended direct free kick. Alonso shot low under Werder's defenders, who had jumped in anticipation of an aerial attempt before Alonso's foot had even touched the ball.

Thomas Müller added a penalty in the 43rd minute, and Mario Götze also scored just before half-time. In the second 45 minutes, long after Bayern had switched on cruise control, Lahm and Götze added another goal each for the final scoreline.

Stuttgart coach Armin Veh had a scowl on his face just four minutes into his side's home match against Leverkusen when Heung-Min Son scored the visiting side's first goal. 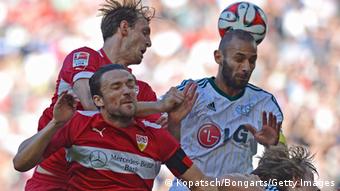 Stuttgart came back from three goals down to save a point

His mood only darkened over the course of the first half as Leverkusen built a 3-0 lead thanks to another goal from Son and one from Karim Bellarabi.

But in the second half, Veh started to turn his frown upside down. Timo Werner started the comeback for the hosts in the 57th minute. Ten minutes later, Florian Klein scored his first strike for Stuttgart, putting them just a goal behind with over 25 minutes to play.

Veh was all smiles in the 77th minute after Martin Hanik headed in a free kick to even the score at 3-3. The result lifted Stuttgart out of the drop zone for the moment, but they could fall back to the relegation playoff spot after Hamburg's game on Sunday.

Mainz played host to Augsburg on a brand new pitch and took the initative with a pair of goals. The first from Jonas Hofmann came 20 minutes in and was his third since arriving on loan from Dortmund. Three minutes later, Jairo Samperio put Mainz ahead 2-0.

Tobias Werner pulled one back for Augsburg in the 78th minute, but Mainz managed to hold on for a 2-1 win. They are currently enjoying a string of eight undefeated matches. 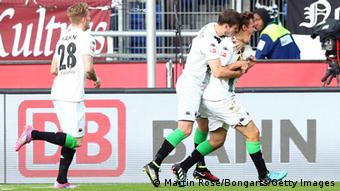 Gladbach remain undefeated on the road

Hanover 96 lost their third match in a row against a Mönchengladbach side that is undefeated on the road this season.

A sloppy mistake in Hanover's side of the pitch by Leonardo Bittencourt led to an excellent counterattacking opportunity for Gladbach. Raffael took possession just outside of the penalty area and passed out to Alvaro Dominguez, who crossed back inside and found Max Kruse for the header goal in the 14th minute.

After the break, Granit Xhaka needed just four minutes of the second half to double Gladbach's lead, and Kruse added the final goal of the 3-0 win in the 90th minute. The win kept Gladbach in second place, four points behind Bayern Munich.

Daniel Caligiuri scored both goals for Wolfsburg on the road against his former club Freiburg, keeping Wolfsburg in the race for European competition next season. Sebastian Kerk's goal on a direct free kick in injury time came to late to make any difference for Freiburg, and the final score was 2-1 for Wolfsburg.

Match day eight in the Bundesliga continues on Sunday with Hamburg hosting Hoffenheim, and Eintracht Frankfurt traveling to Paderborn.

Three takeaways from the Bundesliga Saturday

In a goal-rich round 8 Saturday, three things struck DW's Jefferson Chase as particularly prominent: the free kick spray works, Leverkusen remain an enigma, and Bremen are in big, big trouble. (18.10.2014)

Borussia Dortmund were very glad to welcome back three sorely missed players from the injured reserve list in round 8. But their loss to Cologne shows it will take some time before the team clicks. (18.10.2014)

Many have tried - and failed. Depending on your perspective, coaching Schalke is the most difficult or the most interesting job in the Bundesliga. But the latest aspirant Roberto di Matteo may just be up to the job. (19.10.2014)