President Trump's ban on transgender people from serving in the military, announced via a series of tweets, features sketchy math and may not have been coordinated with the Pentagon. But it could affect thousands.

In what has become a trademark for this president, Donald Trump took to Twitter again Wednesday to make public a significant policy shift.

As a reason for his move, which was announced during the vacation of Pentagon chief James Mattis, Trump cited the "tremendous medical costs and disruption" that transgender service members would entail.

But a study on the issue conducted last year by the Rand Corporation appears to contradict the rationale given by President Trump.

"I can't speculate on the president's decision or his tweets," said Radha Iyengar, a senior economist at the Rand Corporation, "but I can say that the statements on the costs are not consistent with the evidence that we have available."

"We are looking at maybe 25 to 130 active component service members seeking surgeries that could have any kind of impact on their ability to deploy out of a total of 1.3 million service members and health care costs that are less than one-tenth of 1 percent of the total health care costs of the military," said Iyengar, concluding that "we found all of the costs to be negligible."

To put the estimated medical costs associated with transgender personnel of up to $8.4 million (7.2 million euros) per year in context, a Washington Post blogger found that the US military spends 10 times that amount, $84 million, on erectile dysfunction medication.

In its study, Rand estimated that up to 6,630 transgender people serve in the military.

If cost factors and operational readiness issues do not seem to be key drivers behind the president's decision, what are? 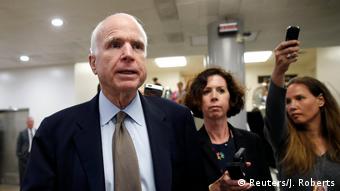 "It looks like this was a step that some of his more socially conservative members of his administration had wanted for a while, including Vice President Mike Pence," said Patrick Egan, a New York University political scientist specializing in public opinion and political institutions in the US.

Pence was apparently behind an effort to ban medical treatment for transgender service members, which failed narrowly last month in the House of Representatives.

But as Politico reported, when conservative lawmakers and defense hawks threatened to derail a spending bill this week that included campaign promises, such as funding for Trump's border wall, they went directly to the president, who not only promptly took up the issue, but went far beyond what Republican legislators wanted - since the proposed bill did not feature a ban on all transgender service members.

Opposition by LGBT advocates and McCain

While President Trump's ban may please his ultraconservative supporters, such as the Family Research Council, who praised the move, it could cost him politically.

The LGBT community blasted Trump, who had billed himself during the campaign as the first Republican presidential nominee to openly support LGBT rights.

"Today Donald Trump has proven himself as unpatriotic as he is unfit to serve as Commander in Chief," Chad Griffin, president of the LGBT advocacy group Human Rights First said in a statement. "This heinous and disgusting action endangers the lives of American service members, undermines military readiness and makes our country less safe."

But Trump's move could also further alienate Cabinet members like James Mattis, a stability factor in an often disorganized administration, and key Republicans like John McCain, the influential head of the Senate's Armed Services Committee.

While Mattis, whose department was apparently caught off guard by the impromptu ban, was vacationing and stayed mum, McCain didn't.

Countering Trump, he released a statement saying decisions like this should not be announced via Twitter and announced his opposition to forcing transgender personnel currently serving out of the military.

But what Trump's decision means concretely for transgender service members already in the military appears unclear as the Pentagon and the White House referred to each other for details on the issue.

"This is terrible," said NYU's Egan. "These are folks who serve honorably, who protect our country and who like everybody in the military have a strong sense of loyalty and duty. And anytime a president undercuts those who are actively serving, it's terrible for them and frankly it's terrible for the institution."

Kristin Beck, a retired Navy Seal member who is transgender, had a different response to President Trump's ban. "Let's meet face to face and you tell me I'm not worthy," she told Business Insider.

In a series of Tweets, Donald Trump renewed fire at his Attorney General Jeff Sessions, seemingly next on the president's chopping block. He also alleged that Ukraine aided Clinton's presidential campaign. (25.07.2017)

The bill, which was passed almost unanimously, would slap new sanctions on Russia, Iran and North Korea. In addition to straining ties between the US and Russia, it could also raise tensions with the EU. (26.07.2017)