Donald Trump's State of the Union: What you need to know

US President Donald Trump outlined his immigration reform plan, declared a victory over the "Islamic State," and announced he would keep Guantanamo Bay prison open. DW looks at the key points of his first major address. 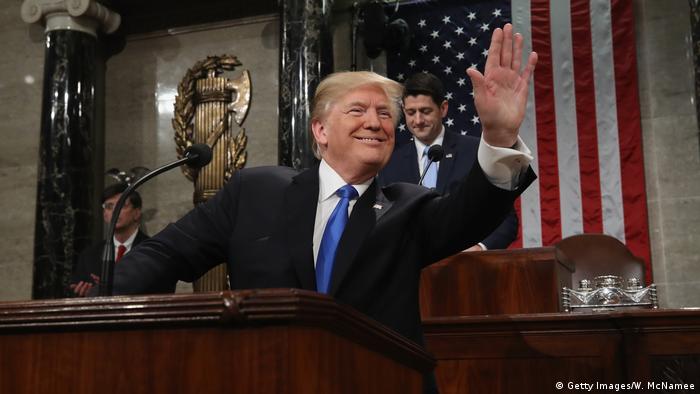 In his first State of the Union address, President Donald Trump extolled the successes of his tenure, while brushing off the scandals that have plagued his administration.

In a speech that lasted nearly 90 minutes, Trump called on the country to unite as "one American family."

DW looks at the key passages of his wide-ranging speech. 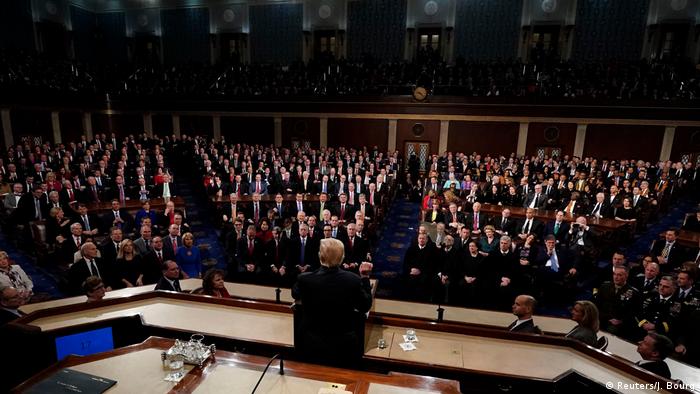 "The state of our union is strong, because our people are strong," Trump told Congress

Trump spent the bulk of his speech addressing domestic topics, the most prominent of which centered around US immigration reform. Trump called for a "four-pillared" plan: "generously" offering a path to citizenship for recipients of the Deferred Action for Childhood Arrivals (DACA) program, securing the border with "our great wall," ending the visa lottery system and ending "chain migration." He added that "Americans are dreamers too" — referring to the "Dreamers" nickname of DACA recipients.

After pulling the United States out of the Trans-Pacific Partnership (TPP) and threatening to leave the North American Free Trade Agreement (NAFTA) in 2017, Trump claimed that "the era of economic surrender is totally over. From now on, we expect trading relationships to be fair. And very importantly, reciprocal."

Trump said America needs to modernize and rebuild its nuclear arsenal as a deterrent, "hoping never to use it." He named China and Russia as countries "that challenge American values."

Trump used his speech to declare a victory over the "Islamic State," saying that a coalition has "liberated almost 100 percent of the territory once held by these killers in Iraq and Syria." However, he added that America will continue its "fight until ISIS is defeated," using another name for the militants.

Trump announced that he has signed an executive order to keep Guantanamo Bay prison open, saying America needed to "continue to have all necessary powers to detain terrorists wherever we chase them down."

Trump lauded recent protests in Iran against "a corrupt dictatorship," adding that "America stands with the people of Iran in their courageous struggle for freedom." He also called on Congress to address the Iran nuclear deal.

Trump once again recognized Jerusalem as the capital of Israel, condemning the UN for voting against "America's sovereign right to make this decision." He also called on the congressional lawmakers to ensure that aid only goes "to friends of America, not enemies of America."

As expected, Trump addressed the "cruel dictatorship of North Korea," without mentioning the country's leader, Kim Jong-Un, by name. The American president insisted he would "not repeat the mistakes of past administrations that got us into this very dangerous position," and that "we need only to look at the depraved character of the North Korean regime to understand the nature of the nuclear threat it could pose to America and its allies."

State of the Union address: Donald Trump on North Korea

Massachusetts Democrat Joe Kennedy III, the grandnephew of John F. Kennedy, the 35th American president, provided the "official" Democratic response in a brief televised address from his home state of Massachusetts. After touching on the #MeToo and #BlackLivesMatter movements, the American wage gap and LGBT rights, the 37-year-old representative addressed the "Dreamers" by speaking in Spanish and promising that Democrats will support them.

"You are part of our story," Kennedy III said after his short Spanish monologue. "We will fight for you and we will not walk away."

The US president has decried a US court's move to block the White House from ending the DACA program, which protects 800,000 migrants. Disagreements in Congress could prompt a government shutdown this month. (10.01.2018)