The US president has decried a US court's move to block the White House from ending the DACA program, which protects 800,000 migrants. Disagreements in Congress could prompt a government shutdown this month. 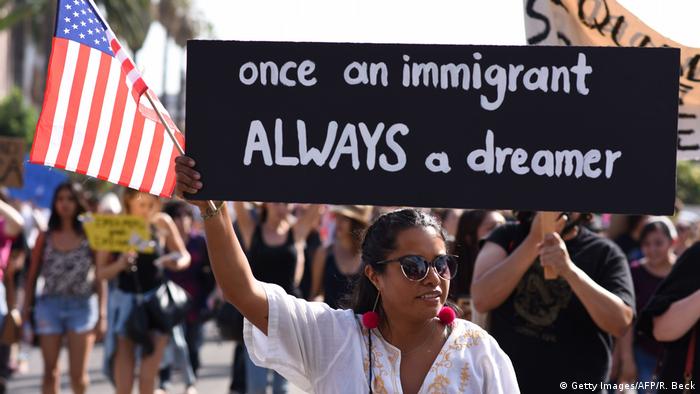 US President Donald Trump on Wednesday slammed the judicial system for being "broken and unfair," after District Judge William Alsup in San Francisco ordered the administration to maintain the so-called Deferred Action for Childhood Arrivals, or DACA, program.

The ruling means that the Trump administration must renew applications for so-called "Dreamers" — children brought to the US illegally by their parents — who are protected from deportation under DACA.

"It just shows everyone how broken and unfair our Court System is when the opposing side in a case (such as DACA) always runs to the 9th Circuit and almost always wins before being reversed by higher courts," the President tweeted.

Trump announced in September that he intended to end the DACA program, which protects some 800,000 young illegal immigrants from deportation. However, he gave Congress until March 5 to muster an alternative program.

On Tuesday evening, ahead of Alsup's ruling, in an instance of presidential brokering, Trump appealed to both parties to compromise on the fate of the Dreamers, while also insisting that on the need to build a wall along the border with Mexico.

However, soon after Alsup questioned the validity of the Justice Department's argument — that DACA had been illegally implemented under Trump's predecessor, Barack Obama, and therefore needed to be scrapped.

Alsup's order can, however, still be overturned by a higher court.

White House press secretary Sarah Huckabee Sanders said decried Alsup's ruling as "outrageous, especially in light of the President's successful bipartisan meeting with House and Senate members at the White House on the same day." She added that the issue should "go through the normal legislative process" and vowed that Trump "will work with members of both parties to reach a permanent solution."

The San Francisco federal judge's ruling came as a particularly heavy blow to Trump after had hosted both Republican and Democratic lawmakers at the White House to discuss immigration in a meeting held before live television cameras.

"I'll take all the heat you want… but you are not that far away from comprehensive immigration reform," the president said.

However, Trump needs Democrat votes if he is to avoid a government shutdown next week. The Democrat lawmakers have threatened to withhold those votes on January 19 without an immigration agreement. Trump has appeared willing to make concessions on reviving protections for young illegals in exchange for beefed-up border protection and stricter asylum laws.