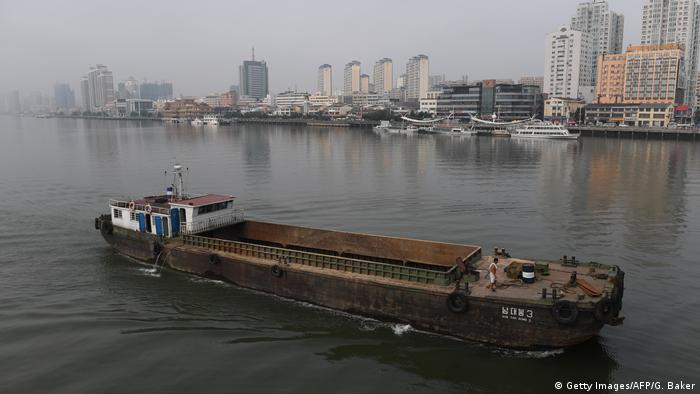 A North Korea vessel spotted by the Chinese border city of Dandong in September 2017.

Trump posted on Twitter: "Caught RED HANDED - very disappointed that China is allowing oil to go into North Korea. There will never be a friendly solution to the North Korea problem if this continues to happen!"

Also on Thursday, Trump posted clips from a television interview he had given almost 20 years ago, in which he said he would be willing to launch a pre-emptive strike against North Korea, if negotiating "like crazy" failed.

China, in turn, moved quickly to dismiss the allegations. Asked about the claims at a press briefing, a spokesperson for China's Defense Ministry said that there had been no been no sanctions-breaking oil sales by Chinese vessels to North Korea. "The situation you have mentioned absolutely does not exist," he said.

The allegations were first reported on Tuesday in South Korean newspaper Chosun Ilbo, citing an anonymous South Korean government source. The source alleged that Chinese ships had illicitly transferred oil to North Korean vessels some 30 times since October in seas off China.

The report was later picked up in some sections of the US media, including Fox News.

If true, the incidents would signal a significant violation of recent UN sanctions imposed on North Korea in response to its nuclear weapons program. The latest resolution, agreed by the UN Security Council just last week, seeks to ban almost 90 percent of all refined petroleum exports to the rogue nation by imposing a cap of just 500,000 barrels per year.

Crude oil exports to the North, meanwhile, are limited to 4 million barrels a year. Security Council members, including China, are also committed to further reductions in the event that Pyongyang launches another nuclear test or intercontinental ballistic missile.

Oil is of particular value in North Korea, which lacks a stable electricity grid, for the use of generators in rural areas.

Although China has voted in favor of all three sanctions resolutions since last summer, it still accounts for the vast majority of all trade and oil supplies into its neighbor, North Korea.

The Trump administration has repeatedly praised and denounced Beijing for its efforts (or lack thereof) to rein in the North and its leader, Kim Jong Un. Washington argues that only China and its president, Xi Jinping, can put an end to the stand-off by convincing the regime to back down and perhaps abandon its nuclear program.