US President Donald Trump has praised his own ability as an arbitrator, offering to mediate in the South China Sea dispute. However, diplomatic skills were not very evident in his latest taunt to North Korea. US President Donald Trump took time out from his schedule in Vietnam on Sunday to respond to taunts from North Korea's Foreign Ministry, which called him an "old lunatic."

The ministry had been condemning Trump's visit to South Korea, accusing the US president of "reckless remarks" and warmongering on his trip to the peninsula.

"Why would Kim Jong Un insult me by calling me 'old,' when I would NEVER call him 'short and fat?'" Trump wrote, referring to the young North Korean leader.

"Oh well, I try so hard to be his friend — and maybe someday that will happen!" he added.

The implied insult is likely to be taken seriously in North Korea, where members of the ruling Kim dynasty are revered almost as deities.

The escalating war of words between Trump and Kim has raised concerns about a potential outbreak of hostilities. 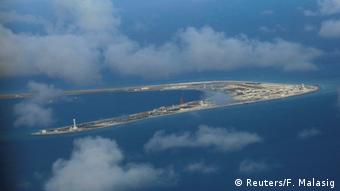 Trump's visit to Vietnam, which saw him attending a summit of Asia-Pacific leaders, was also aimed at drumming up support for measures to contain North Korea's nuclear weapons ambitions.

Also speaking on Sunday at a meeting in Hanoi with Vietnam's president, Tran Dai Quang, Trump offered to mediate in a dispute between Vietnam and China over control of the South China Sea.

"If I can mediate or arbitrate, please let me know," Trump said, adding: "I'm a very good mediator and arbitrator."

Read more:  South China Sea - what you need to know

Vietnam has become the biggest challenger to China's increasing assertiveness in the region. Chinese President Xi Jingping is scheduled to pay a state visit to the Vietnamese capital, Hanoi, later on Sunday. The countries' leaders are expected to focus largely on the territorial issue.

China has raised anxieties among the other claimants to the sea, who also include Brunei, Malaysia, the Philippines and Taiwan, by its construction and militarization of artificial islands.

'The greatest missiles in the world'

Trump also held talks with other Vietnamese leaders that centered on trade, among other things urging the country to buy missiles and other weapons systems from the United States. The US leader seemed to suggest that buying what he called the "greatest missiles in the world" would help wipe out a trade imbalance.

A list of new trade deals with Vietnam released prior to the meetings also included oil and natural gas exploration, aviation and transportation. The financial worth of the deals was not revealed.

Relations between Vietnam and the United States, former adversaries in a long-running war that ended in 1975, have since blossomed, but Vietnam's trade surplus — the sixth largest with the US — is a thorn in the flesh of the Trump administration.

"We want to get that straightened out very quickly," Trump said at a meeting with Prime Minister Nguyen Xuan Phuc.

Trump flew to the Philippines on Sunday as the next and final leg of an extended Asia tour that has also taken him to Japan, South Korea and China.

Read more:  Donald Trump to meet 'Trump of the East'

Donald Trump's "America First" mantra won him the presidential election, but it may have cost the US its place as world superpower. China is hot on America's heels economically and politically, writes DW'S Miodrag Soric. (11.11.2017)

In a joint statement on Syria, the US president and his Russian counterpart have agreed to fight "IS" extremists together. At a regional summit, the leaders also denied claims of Moscow interference in the US election. (11.11.2017)