Donald Trump to impose tariffs on remaining imports from China

The US president has declared new tariffs on further billions of Chinese goods, less than a day after ramping up duties on a range of imports. China and the US had been holding talks to avoid a trade dispute escalation. 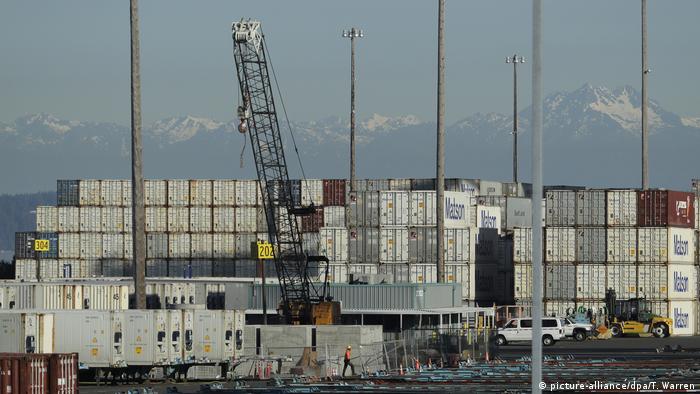 US President Donald Trump began the process of ramping up tariffs on almost all of China's remaining imports after trade talks between the two countries ended on Friday.

The move came less than a day after Washington hit Chinese imports to the US worth about $200 billion (€178 billion) annually. The new increase applies to an even greater value of goods — estimated to be about $300 billion.

US Trade Representative Robert Lighthizer said in a statement that Trump had "ordered us to begin the process of raising tariffs on essentially all remaining imports from China."

Chinese and US representatives met in Washington over two days, ending on Friday, with plans for further talks to be held in China.

Trump tweeted that there was "no need to rush" to get a deal on Friday. He added that the tariffs "may or may not be removed depending on what happens with respect to future negotiations."

According to the editor-in-chief of China's Global Times newspaper, Hu Xijin, this week's talks did not break down. "Both sides think that the talks are constructive and will continue consultations. The two sides agree to meet again in Beijing in the future," Hu said.

A range of consumer products — including cell phones, computers, clothing and toys — were hit by the tariff rate increases from 10% to 25% on Friday. Auto parts were also included.

US authorities have said the tariff rate will not apply to goods that have already left China's ports. Shipping goods from China to the US takes between three and four weeks, so the caveat gives the negotiators extra time to overcome the crisis.

Trump announced the initial set of tariff hikes on Sunday, expressing frustration with the pace of the talks.

Chinese officials responded by vowing that they would take the "necessary countermeasures."

Instead, it may look at other ways to penalize US companies that have dealings within its territory.

Tension between the US and China has heightened after the White House accused Beijing of watering down commitments to trade reform.

China had wanted to delete commitments that Chinese laws would be changed to enact new policies on a range of issues, including the protection of intellectual property.

China told two US warships to turn back after they sailed near disputed islands without permission. The busy waterway is the latest flashpoint as relations between the world's biggest economies continue to strain. (06.05.2019)