US President Donald Trump has threatened a tax on EU cars, escalating the trade conflict triggered by his plans to impose tariffs on steel and aluminum. Other countries "have taken advantage of us for years," he tweeted. 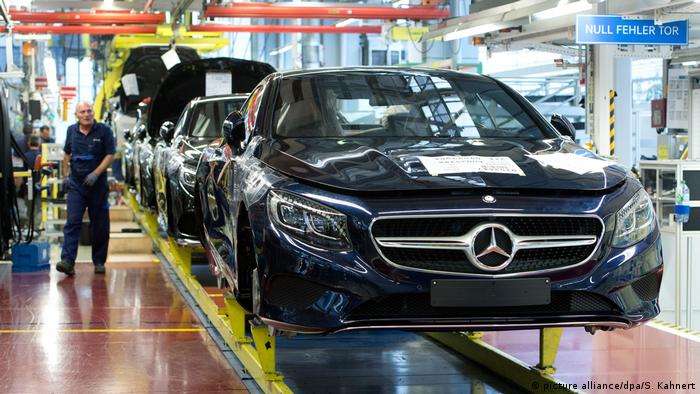 Donald Trump has pledged to tax European-made cars if the EU were to retaliate against upcoming US tariffs on steel and aluminum. On Friday, the EU said it was preparing tariffs of its own to counter the Trump-proposed hike, which is set to go into effect next week.

On Saturday, the president decried the trade imbalance with the EU and threatened to "simply apply a Tax on their Cars which freely pour into the US [sic]."

"They make it impossible for our cars (and more) to sell there," he said.

In a separate tweet, Trump said the US had "very stupid" trade deals and policies.

"Our jobs and wealth are being given to other countries that have taken advantage of us for years," Trump said. "They laugh at what fools our leaders have been. No more!"

On Thursday, Trump announced he would slap a 25-percent tariff on all imported steel and a 10-percent tariff on most aluminum imports, following his campaign promises to end trade practices he believes to be unfair to US workers.

The announcement has rattled world markets as experts warn of a global trade war. The EU, Canada and China have all spoken out against the idea. Additionally, many observers in the US have warned that the hike could rattle US companies that are currently buying cheaper steel from abroad.

The EU is an important producer of steel for the US market, with the US buying about 15 percent of its steel from Europe. In turn, only 1 percent of all EU steel imports come from the US.

On Friday, however, European Commission chief Jean-Claude Juncker pledged to impose tariffs on a wide array of American products in response to Trump's proposal.

"This is basically a stupid process, the fact that we have to do this," Juncker said in Hamburg. "But we have to do it. We will now impose tariffs on motorcycles, Harley Davidson, on blue jeans, Levis, on bourbon."

"We can also do stupid," Juncker added.

Separately, EU Commission spokesman Alexander Winterstein said the EU had been preparing for the situation "for a long time," adding that a decision could be taken at a top Commission meeting on Wednesday.

Trump, however, has appeared unperturbed by talk of a trade war, tweeting on Friday that the US would "win big" by refusing to trade with countries which "get cute."

"When a country (USA) is losing many billions of dollars on trade with virtually every country it does business with, trade wars are good, and easy to win," he said.

According to the German Association of the Automotive Industry (VDA), about 1.35 million new German cars were sold in the US in 2017. Outgoing VDA boss Matthias Wissmann said he expected sales of German cars in the US "to continue to rise in 2018."

What’s next after America First? President-elect Joe Biden inherits a trade war with China that now involves over $700 billion in bilateral trade. Will he lift the tariffs imposed by Donald Trump?